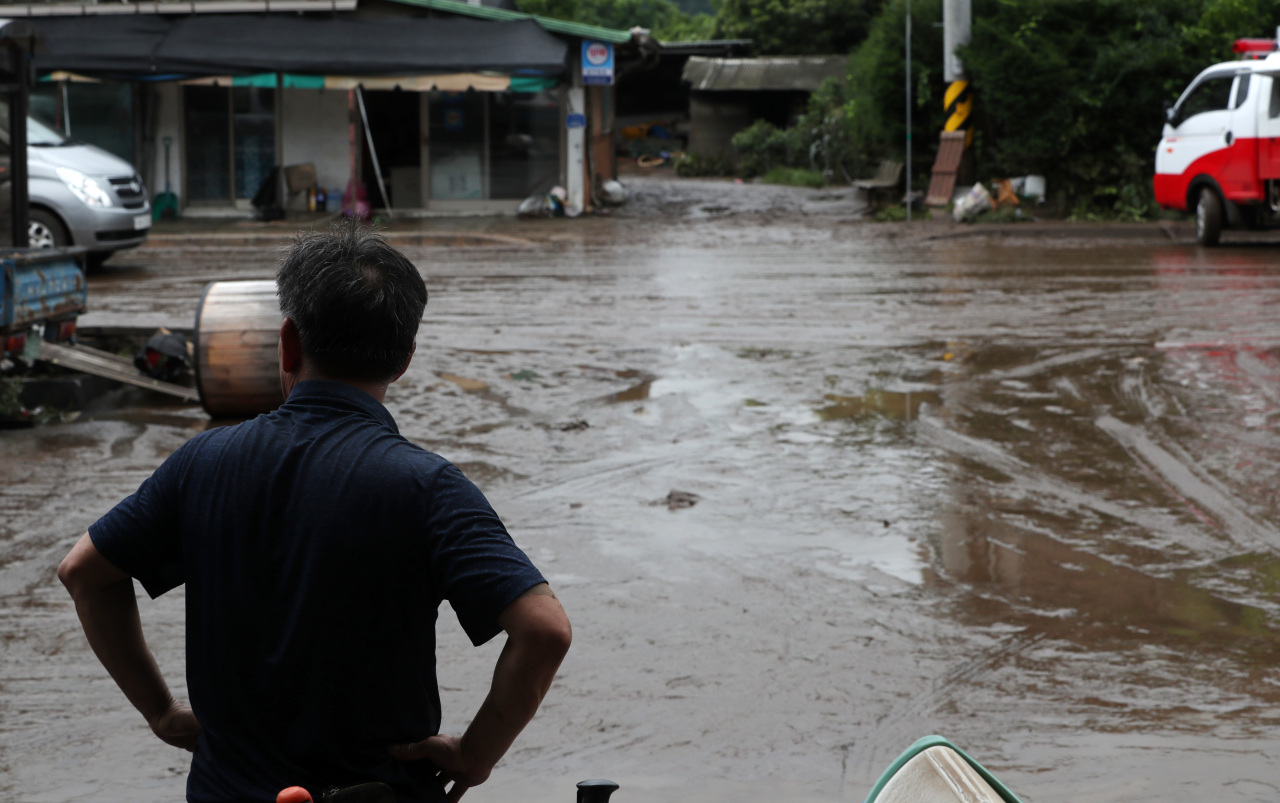 A man in Cheorwon County, Gangwon Province, stares at his village`s flooded road Monday after more than 300 millimeters of rain poured in the region overnight. (Yonhap)
Torrential rains that pounded much of the country over the weekend and Monday are expected to continue, putting authorities on high alert to further damage to regions that have already seen significant casualties and property damage.

At least six are dead and several are unaccounted for since the rains began, as heavy rain prompted flash floods and landslides.

The combination of a typhoon, the North Pacific High and pockets of cold, dry air moving in from the north is locking the monsoon front in the middle of the country, making this year’s rainy season one of the longest on record, the Korea Meteorological Administration said Monday.

Typhoon Hagupit, which started from southeast of Taiwan as the fourth typhoon of the year, was approaching mainland China as of Monday morning. It is not expected to have a direct impact on the Korean Peninsula, but has prompted heavy packs of rain clouds to form in the regions.

As of 9 a.m. Monday, the national weather agency had issued heavy rain warnings and advisories for most regions including Seoul and Gyeonggi, North Chungcheong, South Chungcheong, Gangwon and North Gyeongsang provinces.

From Sunday evening to 1 p.m. Monday, those regions were hit with up to 365.5 millimeters of rain accompanied by thunderstorms.

The continued rain spell caused a significant number of casualties and amount of property damage in those provinces.

By 6 a.m., six people had died and eight others went missing since the torrential downpour started, according to the Disease and Safety Countermeasures Headquarters.

Three landslides in North Chungcheong Province on Sunday killed four, while one was found dead after soil poured over a hatchery and an attached residential building. A man in his 80s died after being swept under a water stream in Seoul.

Around 1,540 people have evacuated, and 190 housing units have been flooded. A total of 3,410 facilities were damaged from the downpour while 818 people lost their homes. A total of 2,800 hectares of land was sunk as well.

As damages continue to be reported, officials are on alert to quickly respond to further incidents. The Ministry of the Interior and Safety escalated the alert response to level 3 from 3 p.m. on Monday.

The ministry was operating with a level 1 response from 10 a.m. Sunday until raising it to level 2 at 1 a.m. on Monday.

President Moon Jae-in canceled his summer vacation plan of staying at his home in South Gyeongsang Province for this week and returned to the Blue House for safety response meetings with related officials.

Prime Minister Chung Sye-kyun ordered municipalities and district governments to bar people’s access to underground passes or nearby streams in danger of flooding. He urged people to refrain from going outdoors unless necessary.

“We need to do our best and stay focused until the end,” Chung said in a meeting Monday. “I ask everyone to thoroughly prepare to minimize casualties and property damages with a mind that this week is the final challenge of this year’s monsoon season.”

The national weather agency forecast that rain will continue in the affected regions even after Hagupit loses its force Tuesday as expected. It said more humidity will flow over to Korea and cause another surge in rainfall for the affected regions, with some regions exceeding 500 millimeters of rainfall from last weekend. The agency expects the continuing downpour to finalize around Wednesday.