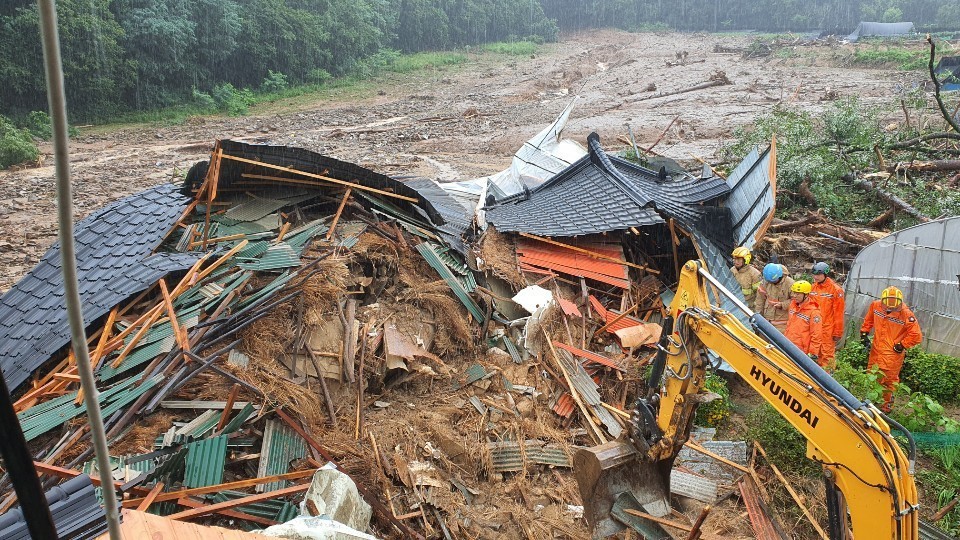 North Chungcheong Province and Gyeonggi Province were hit the hardest, with more than 200 millimeters of rain pouring down from Saturday evening till Sunday morning, according to the Korea Meteorological Administration.

Prime Minister Chung Sye-kyun, in a meeting Sunday, directed ministries and provincial governments to take preventive measures as heavy rains are expected to continue until Monday.

In North Chungcheong Province, which received torrential downpour of up to 60 millimeters per hour overnight, at least four people died and two went missing.

A 42-year-old man died after a mudslide, prompted by heavy rain, hit a campsite in Jecheon. Some 166 people at the site evacuated to a nearby church.

Another man, 59, was found dead near a fishing area at around 11 a.m. He was believed to have drowned in a turgid stream in his village in Eumseong County.

A gas explosion took place at a cattle shed in Chungju after a nearby mountain was ravaged by a landslide. A 56-year-old woman died as a result of the accident.

A firefighter, 29, went missing in Chungju, North Chungcheong Province, after being swept away by a strong current.

More than 80 houses in Chungju were flooded, forcing some 120 residents to evacuate early Sunday morning.

Officials said the couple were trying to save the older woman from being swept away by a flash flood while working in a field.

Anseong City in southern Gyeonggi Province received more than 100 millimeters of rain per hour early Sunday, according to the KMA.

A man in his 50s was found dead in his house due to flooding in the city after two hours of rescue efforts that began after a family member called for help at around 7:30 a.m.

Another man in his 50s died in hospital after rescue workers removed him from a chicken farm in heavy rain.

Citizens of Icheon, another city in Gyeonggi Province, evacuated their homes after a reservoir in the city broke down early morning. Casualties and financial damage have not been confirmed as of press time.

According to Korea Railroad Corp., the Chungbuk Line, which serves North Chungcheong Province, and the Taebaek Line, connecting Jecheon Station to Baeksan Station, had to halt operations as of 6 a.m.

Train service was suspended for some parts of the Yeongdong Line, which connects North Gyeongsang Province to Gangwon Province, and the Jungang Line connecting Seoul to Gyeongju.

As of 2 p.m., the KMA raised its heavy rain alert from advisory to warning for Seoul, meaning that the weather agency expect more than 110 millimeters of rain in six hours and over 180 millimeters in 12 hours.

Starting at 3:10 p.m., Seoul blocked people from accessing the Jamsu Bridge which crosses the Han River as the water level of river will increase after the Paldang Dam opens more gates to release water.

Seoul, Gyeonggi Province and some areas of Gangwon Province are expected to see more rain through Tuesday as Typhoon Hagupit approaches.