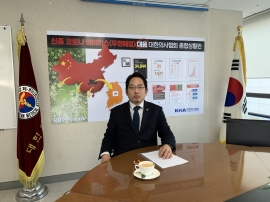 Choi Dae-zip, president of the Korean Medical Association, speaks to The Korea Herald on Saturday at his office in Yongsan, a central Seoul district. (Kim Arin/The Korea Herald)

The head of South Korea’s largest doctor group said the government’s novel coronavirus response shows the country is ill-prepared for an epidemic, criticizing the failure to implement timely measures.

In an interview with The Korea Herald on Saturday at his office in Yongsan, in central Seoul, Korean Medical Association President Choi Dae-zip said Korea’s measures to tackle the new virus were inadequate, and the most urgent action from the government needed right now was restrictions on entry from China.

“What the recent coronavirus outbreak reveals is that Korea had a chance to learn from periodic disease outbreaks in past two decades and it didn’t,” he said. “A lot of the problems that manifested back then are resurfacing.”

For one thing, medical facilities designated to treat the virus infected patients are poorly equipped and wanting in number, Choi said.

“Right now, the tally of confirmed patients is under 30, which is still manageable,” he said. “There are only about 260 negative-pressure isolation rooms nationwide. Once we fail to block the spread in communities, there won’t be enough to accommodate all patients.”

Choi said the initial response by the disease control centers allowed potential cases of suspected patients to escape its watch.

“State health centers and the Korea Centers for Disease Control and Prevention hotline 1339 has turned down requests for testing if people have not visited high risk areas of China,” he said. “That was part of the disease control centers’ orders until Thursday.”

At the 120 or so state-designated treatment centers, patients reporting suspicions of infections struggled to get tested from lack of testing kits, he said.

He also pointed out that although a consultative committee comprising medical professionals and public health officials was set up in end-January, the government did little to communicate the situation with doctors.

“We find out about what’s going on belatedly through the media -- including whether there is an additional patient,” he said, adding such lack of communication was frustrating to the doctors at the field who are in direct contact with patients.

After Korea confirmed a third case of infection on Jan. 26, the doctor’s association issued its first statement asking the government to consider travel restrictions from China as people having no symptoms appeared to spread the virus. This was four days before the World Health Organization declared a public health emergency over the outbreak.

“Since the onset of the outbreak, the medical association has consistently called for a ban on travel to and from if not all regions of China, at least five of its provinces with the highest number of reported cases,” Choi said.

“I understand China is a major trading partner, and the decision could hurt our economy,” he said. “But as a doctor, nothing bears greater consideration than public safety.”

He said the current entry ban on visitors from Hubei, a central Chinese province where the virus originated, was practically invalid.

“Since the ban went into effect on Feb. 2, not one instance of barred entry has been reported -- zero.”

Things may spiral out of control when tens of thousands of Chinese students are expected to return next month for the spring semester, he said.

“The Korean Medical Association stands by its stance that movements to and from all of China should be monitored and regulated, allowed only in exceptional circumstances, until the epidemic subsides.”

Choi stressed the travel ban argument was based solely from the perspective of disease control.

“A travel ban isn’t racist, or anti-Chinese,” he said. “Each country should be doing its best to contain the outbreak, and prevent it from spilling across borders.”

“Bringing racism or hatred debate into this is just going off on a tangent, and obscuring us from discussing what’s really important, which is stopping the infectious disease we know little about from spreading,” he said.

“Dividing the number of deaths by the number of confirmed cases holds little significance at this point,” he said. “For one thing, we don’t know how infected patients will fare over time.”

He added there was a chance information from China was not transparent.

“We don’t know how reliable the death toll is as it stands, with a majority of them reported in China. Figures may have been downplayed.”

As for the scramble for face masks, Choi said the government should have made sure of its availability at home before extending a helping hand to China.

He said the medical association was working to resolve the mask shortage problem at clinics and hospitals across the country.

“The priority of a government anywhere should be its citizens,” he said. “Aid should be offered when it can be afforded, not at the sacrifice of your own safety.”