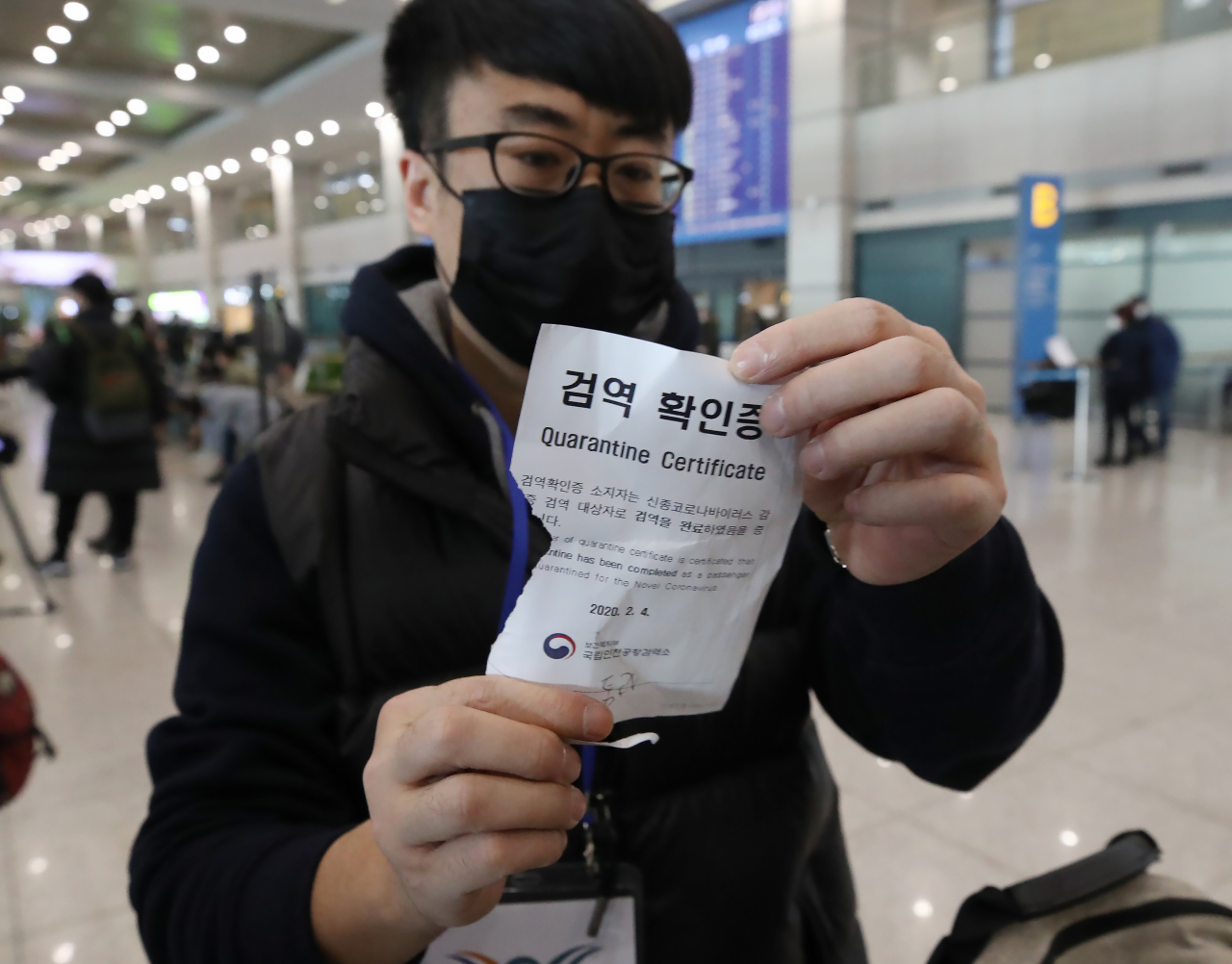 A Chinese national shows a certificate stating the holder has been cleared by Korean quarantine authorities upon arrival at Incheon Airport on Tuesday. (Yonhap)
INCHEON/SEOUL -- At 12:34 a.m. Tuesday, Korean Air Flight 854 arrived at Incheon International Airport, the main gateway to South Korea, carrying 110 passengers from Beijing.

The flight was the first to touchdown here from China since sweeping restrictions on arrivals from the country took effect, as Seoul ramps up measures to keep the new coronavirus at bay. Some 110 more flights from the virus-hit country, carrying about 10,000, were to arrive on the same day, mostly through Incheon and few through Jeju International Airport.

All passengers arriving from China, regardless of nationality, are required to go through rigorous quarantine and inspection procedures at designated areas separate from arrivals from elsewhere. All foreigners who have been to China’s Hubei province, the hub of the deadly coronavirus outbreak, in the past two weeks will be barred from entering Korea.

As of Tuesday afternoon, no one was denied entry upon arrival, as the ban took effect after a two-day prior notice.

“I am still feeling concerned, despite the measures (to block entry from Hubei province),” Son Eun-hye, a female passenger from Pohang traveling to the US, told The Korea Herald.

“I think it won’t be effective. The government should take more stringent steps and block (everyone arriving from China).”

The Incheon airport was ostensibly emptier than usual, with travelers, employees and security officials wearing face masks and looking tense. Warning signs about the coronavirus were displayed on dashboards and announcements were made throughout the airport with information and instructions.

An employee at a currency exchange desk in Terminal 2 could attest to the drop in airport visitors.

“The number of people using the airport, both Chinese and non-Chinese, has definitely dropped,” said the woman who wished to be identified only by her surname Lim.

A senior executive at a Seoul-based tour agency spoke of a surge in phone inquiries about ticket cancellation.

“There is this outpouring of calls to cancel flights to mainland China, Macao, Hong Kong and even Taiwan. That immediate dip in demand appears to be expanding to Southeast Asia,” said Lee Seung-ok.

An employee at a Jamba Juice outlet said: “I am wearing a mask all day while I work, and no customer has complained so far.”

All employees are required to wear face masks, check their temperature three times a day and send the data to the company, he explained.

Arrivals from China, including returning Koreans, stood at around 30,000 in early January and plummeted to 11,381 -- 3,090 Korean passport holders and 8,291 foreigners -- on Monday, a day before the entry ban took effect.

That figure was expected to fall further to about 10,000 Tuesday, although no exact data was available as of press time.

Passengers of the flight 854, the first flight to arrive from China on Tuesday, were routed to one of three designated quarantine areas, which opened the previous day. 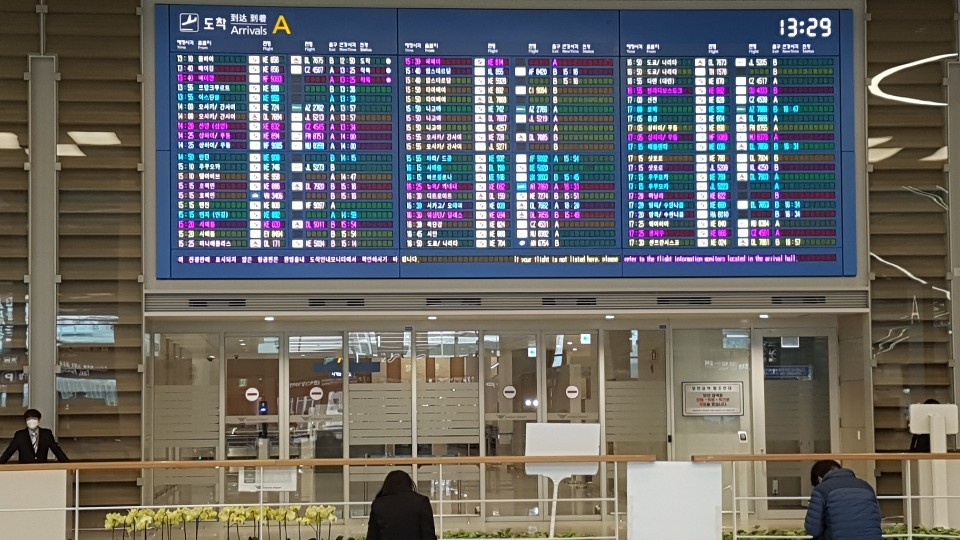 Starting Tuesday, visitors from China have to go through Arrival Gate A at Terminal 2 in Incheon Airport before going through quarantine procedures. Gates A and F at Terminal 1 serve as the exclusive entrances for travelers entering Korea from virus-hit China. (Choi Si-young/The Korea Herald)
There are two special China-only quarantine sections at Terminal 1, and one at Terminal 2, manned by a large number of airport officials and 50 officials dispatched from the Ministry of Health and Welfare.

All passengers had to fill out a health questionnaire and declare whether they had fever or respiratory symptoms. In addition, foreigners had to hand in a special quarantine report, stating their domestic address and phone number and whether they had visited or transited via Hubei province. Once the forms are handed in, the quarantine officers check all passengers with thermometers.

A group of over 20 officials called the mobile numbers provided by passengers on the spot for verification.

Once their contact information was verified, the passengers received “quarantine certificates,” which were submitted at the final stage, customs. Without the certificate, entry was denied.

All passengers from the first flight cleared customs, with no cases of fever or other symptoms and no unverified phone numbers, according to the authority.

“I don’t see anything bad (in the government’s measures). Quarantine is done everywhere,” said Lilia Fakhretdinova, a Russian citizen who is traveling from Korea to Indonesia.

“With the Chinese New Year, I think you have to take more extreme measures because of the amount of travel that you do in China,” Robert Hannah, a US citizen who arrived at the airport from Taiwan.

Korea confirmed one additional case of coronavirus on Tuesday, bringing the total number of infected to 16 here.

The death toll from the virus, which is officially called the 2019 novel coronavirus, or 2019-nCov, now stands at over 420 in China, one in the Philippines and one in Hong Kong. Around the world, the virus has infected more than 20,438 people in more than 25 countries.