Over the past few years, the K-pop scene has seen a flood of foreign producers and songwriters landing credits on notable hits. Fans are already familiar with names like Teddy Riley, LDN Nosie and Divine Music, who are often credited on songs from big acts like EXO, Girls’ Generation and SHINee. K-pop powerhouses like S.M. Entertainment have also been extending their global reach to push their musical boundaries.

And at the forefront of the crossover movement is Ryan Jhun, a K-pop mastermind and hit producer and songwriter who believes embracing dynamic sounds from all over the world bodes well for K-pop’s future.

“Just like red and white make pink when blended, K-pop has become a genre of hybrid, or alternative, with the influx of US pop. It has become a hub for music all around the world and I guarantee that its market will keep expanding globally,” said Jhun in a recent interview with The Korea Herald held at S.M.’s recording studio in Seoul. 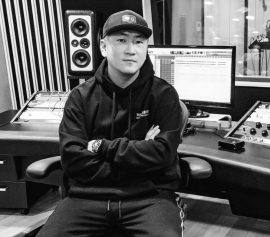 Best known for his close work with S.M., from which he churned out hits like SHINee’s “Lucifer,” Red Velvet’s “Dumb Dumb,” EXO’s “Love Me Right” and “Pick Me” from Mnet’s second season of “Produce 101,” Jhun is a strong supporter of a global network. Participating in S.M.’s song camps, during which internationally renowned producers and writers collaborate on producing songs for S.M. artists, has helped him keep his experimental approach in K-pop. While spearheading his own global songwriting teams, Marcan Entertainment and Musikade, based in Seoul, Jhun has recently teamed up with famous overseas producers like Dem Jointz and LDN Noise to produce EXO’s upcoming new single “Obsession.”

“I work with over 200 people in my teams. The value of working in teams is that we manufacture something amazing. At song camps, we discover and develop amazing new talents. For example, we can debut a truck driver as a rising songwriter. And I’m very satisfied with what we create from such collaborations. I take pride in shaping my desired sound with aspiring global partners,” said Jhun, as he pointed at some foreign producers working at the other side of the studio.

Genre lines have been blurred more than ever, but Jhun believes there is a fine line between K-pop and the kind of pop heard on US radio.

While K-pop is characterized by dynamic, complicated formula that features variations and emotions, US pop tends to have a comparatively simpler structure and chord progression. “For example, K-pop can be compared to Korean food made by a meticulous recipe that takes various procedures,” he explained.

Despite those differences, what enables creating crossover sounds is the producers’ efforts to find the right balance between the genres and to develop a hybrid that can satisfy both audiences.

“The reason why foreign producers can work with K-pop is because two genres share somewhat similar elements, they kind of complement each other. And the work of merging those two should be done naturally, not by force, as it’s about understanding each other’s culture,” he said.

“Of course, sometimes it needs some extra work, like when a song goes too pop-ish, we put some Korean sentiment onto it. For example, when I made NCT Dream’s ‘Boom,’ composer Yoo Young-jin from S.M. had to squeeze out some K-pop elements so that both local and global fans could like it.” 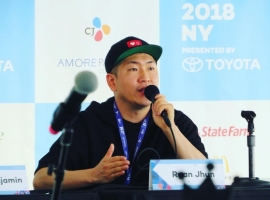 Regarding concerns that K-pop might be dominated by foreign sounds and lose its own edge, Jhun said he believed K-pop’s originality is what has inspired fans and musicians all around the world. In order for K-pop to be recognized as a mainstream genre, which is his ultimate goal as a producer, it’s important to keep its authenticity and originality while embracing new foreign sounds, he said, adding, “I don’t know how to define pop music, but my definition for K-pop is a genre that combines both Korean and US sentiments.”

K-pop sounds limitless, but Jhun expects that producers might have to compete with “good ideas” in the near future as it will get harder to discover new sound that is dramatic enough to rock the scene.

“I believe that K-pop will get bigger, but musically, just like fashion, which comes full circle, and fusion of food that is based on originality, it is likely to go round and round. It’s hard to come up with brand new sound, as we’ve already done everything with what can come out from 12 keys in music. Now it’s going to be about ideas,” he explained, showing three distinct streaming sites from his phone where he listens to newly released songs each morning to keep him updated.

Asked if there’s any song that he has been into these days, he pointed to Taeyeon’s “Spark,” a song that shows a nice balance of K-pop and US pop elements. As a big fan of Mnet’s idol competition show “Queendom,” the prolific producer went on to share that he hopes to work with Soyeon of (G)-Idle one day. Setting his eyes globally, he also mentioned interest in launching into India, a region he hopes to explore in the future.

“As a K-pop producer, I will keep making good songs that can be loved by fans and keep contributing to the growth of K-pop. At the same time, I will keep making efforts to find new songwriters and develop a system where our efforts can pay off,” said Jhun.