Kim Myong-gil, the roving ambassador at the North Korea’s Foreign Ministry, also emphasized again that the US should not try to involve a third party in their relationship, according to an interview with Korean Central News Agency. 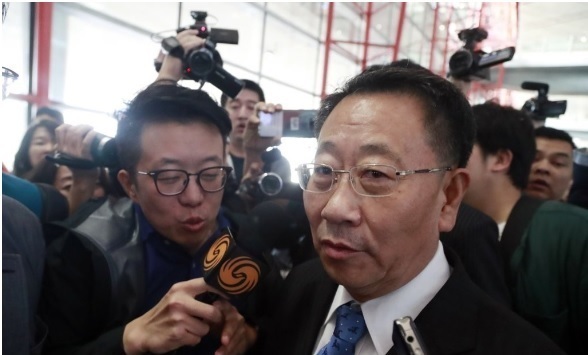 (Yonhap)
“As we have already reiterated several times, the DPRK-US dialogue is impossible unless the US makes a bold decision to drop the hostile policy towards the DPRK,” Kim was quoted as saying. DPRK stands for the North’s official name, the Democratic People’s Republic of Korea.

Kim revealed that US special envoy for North Korea Stephen Biegun had sent via Sweden a request for negotiations in December.

“In my opinion, the US side traded on Sweden not to give impression that it fawns on the DPRK,” said Kim.

Kim warned Stockholm to stay out of the negotiation process, though he added that Pyongyang appreciates that Sweden provided the venue for the last round of working-level talks with the US in early October.

“It is not for lack of communication channel or mediator that the DPRK-US negotiations have not yet been held,” Kim said. “The US should no longer pretend it is interested in the DPRK-US dialogue, having the third country stand for it.”

Kim’s remarks -- revealed just hours after another condemning statement issued by a senior official -- indicates that Pyongyang is ramping up pressure on the US as the year-end deadline set by the North Korean leader approaches. Kim Jong-un has called for the US to come up with new proposals for the nuclear talks.

Kim Yong-chol previously led the negotiations with the US as the counterpart of Secretary of State Mike Pompeo. He is the chairman of the Korea Asia-Pacific Peace Committee of North Korea.

Kim Yong-chol also downplayed the recent decision by the US and South Korea to defer their joint warplane exercise scheduled for this month, saying the move does not guarantee peace on the Korean Peninsula and does not help resolve their differences.

On Sunday, the US Defense Secretary Mark Esper and South Korean Defense Minister Jeong Kyeong-doo held a joint press briefing to announce that their governments had agreed to postpone the Combined Flying Training Event as “an act of goodwill” to support the diplomatic efforts for North Korea to return to the denuclearization negotiations.

With North Korea increasing pressure on the US, South Korean Unification Minister Kim Yeon-chul met with Biegun on Monday to discuss ways to bring about the success of the denuclearization negotiations.

“We shared information and had a candid talk on the creative and flexible methods necessary for the success of the denuclearization negotiations,” the minister said after a luncheon with the US official in the Washington.

Pyongyang has demanded that all South Korean-built facilities at the mountain’s resort complex be demolished, saying it will create a tourism zone on its own.