The top court ruled Thursday that an entry ban on a Korean American singer who obtained US citizenship in an apparent attempt to evade military conscription here is illegal, paving the way for him to come to South Korea 17 years after it was prohibited. 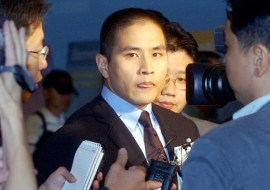 The Supreme Court found that refusing an entry visa to Steve Yoo, 43, who was a highly popular singer until the early 2000s and is better known as Yoo Seung-jun, is in violation of “administrative procedures.”

In 2002, the Ministry of Justice banned Yoo from entering Korea after he chose US citizenship, which was viewed as an attempt to dodge the country’s mandatory military service. His decision drew public ire, especially because he had previously promised to fulfil his military duty.

In Korea, all able-bodied men must serve in the military for about two years. Under the current law, a man holding dual citizenship must choose one nationality by the end of March in the year he turns 18.

Yoo filed a lawsuit against a Korean consulate in the US in October 2015 after it refused to grant him an F-4 visa, which is issued to foreign citizens of Korean heritage, including those who previously renounced their citizenship.

In September 2016, the court ruled against Yoo, saying his return and resumption of his activities in the entertainment scene here would “undermine the morale of soldiers who are devoting themselves to serving the country and provoke young people into evading conscription.” In February 2017, the appeals court upheld the lower court’s decision.

On Thursday, the Supreme Court sent the case back to the Seoul High Court, ordering it to retry the case. It said that the ministry’s “administrative” decision is not legally binding and it does not necessarily mean the Korean consulate in Los Angeles must follow the decision. The consulate failed to exercise its rights to make its own decision on Yoo’s entry, the court added.

The court also noted that even those who gave up Korean nationality to evade military duty should not be restricted from receiving a visa to stay in the country when they reach 38, citing the current Immigration Control Act.

“I am sincerely grateful and I will repent for the rest of my life,” Yoo said through his lawyer.

The Military Manpower Administration said it respects the court’s decision. It also said it will continue to come up with effective measures to prevent evasion of military conscription.