A 36-year-old South Korean man was arrested Saturday on suspicion of assaulting his wife and abusing their toddler son, police said Sunday.

According to police, the man is accused of assaulting his wife, 30, for over three hours starting Thursday at 9 p.m. in the presence of their child. The victim came to Korea from Vietnam as a marriage migrant.

A video of the physical and verbal assault, which took place at the couple’s home in Yeongam, South Jeolla Province, was posted on social media Saturday morning, leading to public outrage. Facebook has since added a warning label to the video for its violent content. 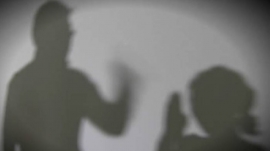 The video shows the man slapping the woman in the face, kicking her and then repeatedly punching her in the head and the stomach as she crouches in a corner. Their 2-year-old is seen crying next to his mother and eventually running away as the beating escalates.

“Didn’t I tell you that you are not in Vietnam?” the man yells in the video.

Yeongam Police Station said the victim and child were moved to a local women’s shelter for protection after a report was filed Friday at 8:07 a.m. The victim’s acquaintance, also Vietnamese, who reported the case to police, said the suspect assaulted his wife “because she did not speak fluent Korean.” Police identified the suspect’s location and arrested him Saturday at around 5 p.m.

The victim is receiving medical treatment for rib fractures at a hospital. The Women Migrants Human Rights Center of Korea said Friday the center is offering support to the victim.

In the investigation that followed, the suspect told police he was drunk at the time of the incident, according to police. The police said he was arrested without a warrant due to the possibility of a retaliatory offense.

An official at the Vietnamese Women’s Union in South Korea told The Korea Herald, “The perpetrators of domestic violence against migrant women in Korea seldom face punishment,” which is why “the victims of abuse by spouse usually seek help from women’s rights organizations or multicultural family support centers rather than taking legal steps.”

“It’s not just Vietnamese women. (Spousal abuse) happens to marriage migrant women of all nationalities,” the official said. “We hope the law here will punish the abusive husbands more severely.”

The official added that the victim is afraid her family in Vietnam will learn of what happened as the video is widely shared across social media.