The government confirmed on Friday that additional mattresses made by Daijin Bed Co. have been found to release radiation at levels that exceed the safety standard.

Earlier, the Nuclear Safety and Security Commission announced that seven of Daijin's mattresses released radon up to 9.3 times above the national standard. Radon is a radioactive, colorless and odorless gas that can be found in nature as an indirect decay product of uranium or thorium. It is considered a health hazard due to its radioactivity, and exposure to the radioactive gas can cause lung cancer.

The Office for Government Policy Coordination announced that 14 other Daijin mattresses also violated the relevant standard and ordered an administrative measure to discard the models. 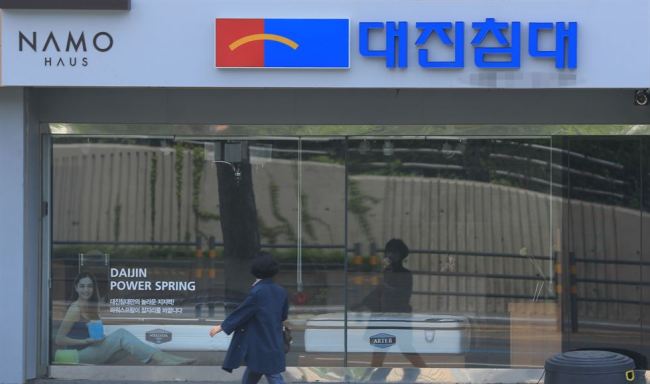 A citizen walks past a Daijin Bed store in Seoul. (Yonhap)
The finding concluded that the annual radiation dose of the models tested exceeded the safety standard for processed products of 1 millisievert (mSv) per year, the office said.

The government has been under fire for failing to properly monitor radiation levels of everyday goods that people come in contact with on a daily basis.

"The government will come up with comprehensive measures to solve various problems that occurred during the process and will focus on collecting the problematic mattresses as well as supporting consumers by listening to the opinions of various experts and civic groups," Noh Hyeong-ouk, vice-minister of the office, told reporters.

Daijin Bed apologized for the incident and said it is in the process of recalling the problematic products from all stores. All stores it operates directly have been shuttered due to the unfolding scandal.

Despite such actions, groups of consumers have already filed a legal action against the company. (Yonhap)