President Moon Jae-in on Friday stressed that the PyeongChang Olympics represent an opportunity for peace at a presidential reception that brought together top officials from China, Japan and the US. 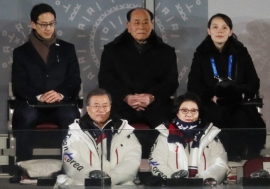 The three countries -- the key players in issues surrounding the North Korean nuclear issue --are represented by Japanese Prime Minister Shinzo Abe, US Vice President Mike Pence and China’s Politburo Standing Committee member Han Zheng. Russia, the other party in the six-party talks on denuclearization, is absent from the games due to doping allegations.

“Even as we are here together, many countries around the world have thorny issues to sort out between them. Korea is no exception. Had it not been for the PyeongChang Olympics, some of us might not have had (the) chance to be together in the same room,” Moon said.

Moon went on to cite the example of the 1991 World Table Tennis Championships, where the two Koreas fielded a joint team. He said that the joint women’s ice hockey team at the Winter Games is a seed of hope.

Citing a poem that says “a snowman starts with a snowball,” Moon said that the ice hockey players “are now holding a small snowball in their hands.”

“Together, we should start rolling the small snowball carefully with our hands. Now, if we put our hearts and minds together, it will continue to grow larger and larger and turn into a snowman of peace.”

While the South Korean leader talked of peace on the Korean Peninsula, Pence’s actions at the reception indicated that US-North Korea dialogue -- considered an essential step in the denuclearization of the North -- is unlikely.

Despite much speculation over the possibility of Pence meeting with the North Korean delegation, no such meeting came about. 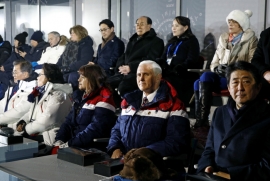 Pence, along with Abe, arrived at the reception late, avoiding Moon’s meet-and-greet session where the North’s chief delegate was present. The US vice president did not attend the main event of the reception, where he would have been given a seat at the head table along with Kim Yong-nam and Abe.

Cheong Wa Dae said later that Pence had informed Seoul in advance that he would not attend the entire event in order to meet with US athletes.

According to pool reports, Pence did however take the time to greet and shake hands with other leaders present, but did not acknowledge Kim Yong-nam

As for the North Korean delegation, the 23-member group arrived in the South by private jet at 1:46 p.m. at the Incheon Airport.

From there, the delegation moved directly to PyeongChang in Gangwon Province to attend the reception and Olympic opening ceremony. The delegation, or a combination of its members, will also meet with Moon on Saturday.

While the delegation is led by Kim Yong-nam, experts are focusing on Kim Yo-jong. With her direct link to Kim Jong-un, she is expected to play a key role in future inter-Korean relations.

Jeong Se-hyun, who served as the South’s minister of unification for the liberal Roh Moo-hyun administration, said in an interview with a local radio station that Kim Jong-un has sent his sister to express willingness to revive inter-Korean talks, which could pave the way for Washington-Pyongyang dialogue.

But others are skeptical that Kim Yo-jong’s presence in South Korea will lead to any noteworthy breakthrough in the current situation surrounding North Korea, with Pyongyang’s unwillingness to give up its nuclear development program.

“President Moon has tied the issue of bringing denuclearization on the Korean Peninsula to an improvement in inter-Korean ties, but North Korea is not interested in denuclearization at the moment,” said research fellow Woo Jung-yeop of the Sejong Institute.

Some experts are voicing concerns that North Korea may be using the Olympic overture to gain more leeway on international sanctions.

Recently, North Korea has often made moves that call for sanctions exemptions, and “sending Choe Hwi to South Korea is part of North Korea’s tactics to widen the scope of its sanctions violations,” a source from a state-run research institute told The Korea Herald on condition of anonymity.

Choe is subject to UN sanctions, including a travel ban, which was lifted for the duration of the visit to the South.