[ The Korea Herald – Send E-mail ]
Despite apology, Japan denies mobilizing WWII sex slaves
By KH디지털2
Published : Jan 31, 2016 - 16:25
Updated : Jan 31, 2016 - 19:00
Despite a much-touted deal with Seoul and an apology to the “comfort women,” Tokyo was found Sunday to have once again denied the forcible nature of its mobilization of sex slaves during World War II in a formal U.N. document.

The Japanese government on Jan. 29 submitted a response to the Committee on the Elimination of Discrimination against Women, a group of 23 independent experts which has posed a list of questions on its handling of women’s rights issues including the conscription of sex slaves in frontline brothels. The text was registered ahead of the committee’s 63rd session to be held from Feb. 15 to March 4 in Geneva.

While stressing that the sex slavery issue was resolved “finally and irreversibly’ through the Dec. 28 agreement with Korea, Japan said it could not find any evidence that the women were forcefully recruited despite a “full-scale fact finding study” conducted since the early 1990s, including research on Japanese and U.S. records, hearings of military officials and managers of the “comfort stations” and victim testimony.

It also rejected the panel’s recommendations to address the sex slavery issue in school textbooks and raise public awareness, citing the absence of a state textbook system, despite its widely known interventions, namely with official schoolbook guidelines and prepublication screening.

“The ’forceful taking away’ of comfort women by the military and government authorities could not be confirmed in any of the documents that the government of Japan was able to identify,” reads the reply posted on the website of the Office of the U.N. High Commissioner for Human Rights.

Seoul rebuked the claim, saying the issue could not be resolved until Tokyo completes the implementation of its promises under the deal, including providing 1 billion yen ($8.25 million) from state coffers with which a foundation will be set up here for the victims.

“The term ‘final and irreversible’ is premised that the agreement’s content and underlying spirit will conscientiously be fulfilled,” the Foreign Ministry said in a statement.

“In particular, it means that in order for the settlement to be ‘irreversible,’ Japan, too, must not reverse it or commit retrogressive words or acts.”

The ministry also warned Japan against attempting to dent the hard-won compromise and called for turning into behavior its pledges that it would help the aging women regain their honor and dignity and cure their wounds.

“Once again, it is an indisputable historical fact that there was coercion during the comfort women’s mobilization, recruitment and transfer, as clearly concluded by the international community, including U.N. rapporteur reports and congressional resolutions from the U.S. and other nations, as well as Tokyo’s own 1993 Kono statement and testimonies by the victims,” it added, referring to the landmark apology issued by then-Chief Cabinet Secretary Yohei Kono. 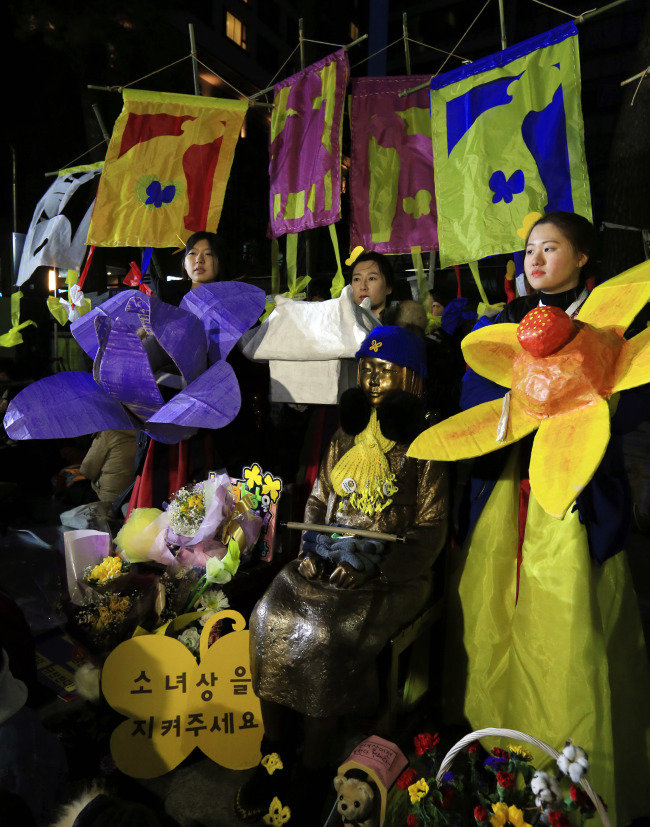 Students holding works of art stand around a “comfort women” statue opposite the Japanese Embassy in Seoul on Saturday in their fifth weekly protest against the Korea-Japan deal. Yonhap
Yet the simmering controversy may presage the beginning of a long battle on the world stage over the interpretation and details on the execution of the hotly debated deal, under which Korea is supposed to “refrain” from accusing or criticizing Japan concerning the issue, others say.

In the upcoming deliberations on Japan, however, other countries will not be given a chance to speak, though nongovernmental organizations can participate, such as by presenting written reports and having consultations with the panel in advance, the ministry noted.

“While Japan had consistently denied the forcibleness in narrow terms even during negotiations, having acknowledged its responsibility in a broad sense and offered an apology, such an attitude will only sour public sentiments here,” a ministry official said, requesting anonymity due to the sensitivity of the matter.

“What may be more outrageous is that they are trying to evade the textbook issue -- the world knows that the Japanese government is deeply involved directly and backhandedly in the contents of workbooks via its guidelines and screening system.”