The play ― chosen to contrast with last year’s “A Midsummer Night’s Dream” ― follows the cycle of revenge between Roman noble Titus Andronicus and Tamora, the queen of the Goths, in savage detail. One London production last year was so brutal that media reported audience members fainting.

The gore was all a bit too “Game of Thrones” for Victorian sensibilities, resulting in the play becoming one of Shakespeare’s lesser-known plays.

But director Ray Salcedo points out that this was not always the case.

“Titus Andronicus was actually one of Shakespeare’s most popular plays in his day, and we see the merit of that honor every time it is revisited,” he said. 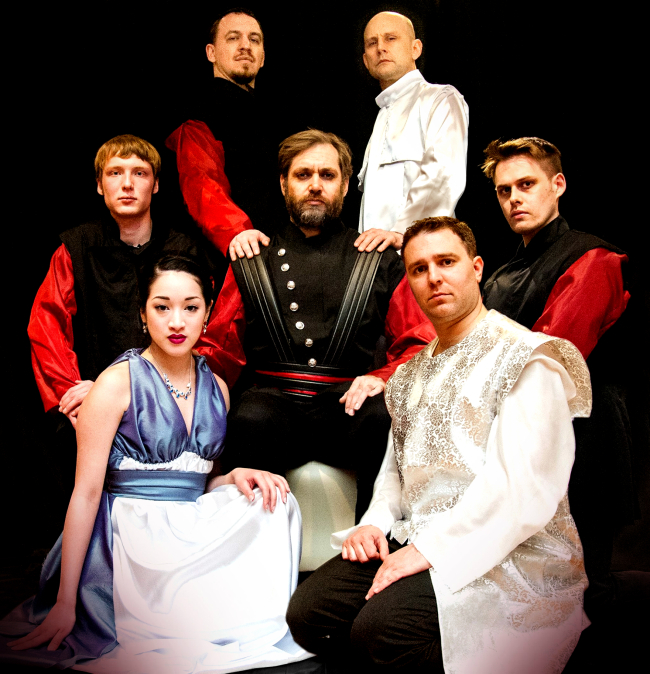 The Roman (left) and Goth clans from Seoul Shakespeare’s upcoming production of “Titus Andronicus.” (Jorge Toro, My Seoul Photography)
Beyond the headline carnage, he says, are a set of ideas that resonate strongly with current affairs.

“Thematically, this play is very rich. Today’s headlines reflect how issues related to racism, female objectification, patriarchy, conquest and ritualized violence are all very much part of our world, and Titus Andronicus explores each of these heavy themes masterfully,” he said.

“Aaron the Moor responds to other characters’ racism with statements of pride in his color that would not sound out of place in today’s Black Lives Matter movement,” said Lauren Ash Morgan, who also appears as Tamora in the play.

“Chiron and Demetrius’s horrific treatment of Lavinia is sparked at first by what they call their ‘love’ for her,” she said

“Attitudes like this have been the subject of a great deal of discussion just this year with issues such as consent, catcalling and rape.” 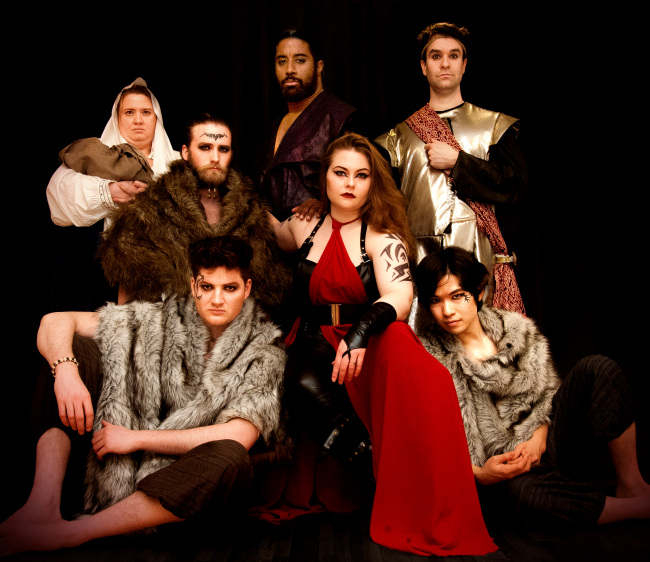 The Roman (left) and Goth clans from Seoul Shakespeare’s upcoming production of “Titus Andronicus.” (Jorge Toro, My Seoul Photography)
Salcedo said he wanted to explore the ideas of the divide between the civil and the savage, which is often thought of as substantial when in reality the separation is very fine.

“We witness this paradox via the vicious cycle of revenge that ensues between one elite family from ancient Rome, which was seen as the height of civilization in its time, and one ‘barbaric’ and conquered Goth family,” said Ray Salcedo.

“I also wanted to explore how certain social conditions can contribute to the unleashing of humanity’s potential for horrific levels of depravity.”

Cycles of revenge and power are also reflected in Ash-Morgan’s designs for the costumes.

“It’s important to me that when Titus and Tamora make their initial crucial decisions to take revenge, they are each in a position of power, with nothing tangible to gain from their revenge. Titus’s revenge is ceremonial and religious. Tamora’s revenge is emotional,” she said.

“Only in the end does the underdog become the aggressor, and so it is important to me that the clothing reflect the power dynamics at each of those crucial moments.”

Salcedo conceded that the plot was quite grim, but said that there were positives in the play.

“Hope and redemption have their brief moments as well, but this is a Shakespearean tragedy, so you know that not many people come out of this alive,” he said.

“Each character who chooses revenge over mercy in this play is ultimately punished for that decision,” she said “A lot of theatre groups seem to choose this play specifically for its gore, and that’s the main thing that comes out of those productions. But if you really are sensitive to the text, it’s actually quite a morally grounded play.”

“I think it’s a cathartic play. It plunges into the depths of suffering so that the audience can come through it and feel they have experienced something. And it’s satisfying in the end, in contrast to the heavy sadness and loss of a play like ‘King Lear.’”

The play opens 7 p.m. at the Egg and Nucleus Theater in Hyehwa, Seoul, on May 30.

Tickets are 20,000 won if booked online and 25,000 won at the door. See www.seoulshakespearecompany.org for booking details.