The results by the South Korean national team in Group H of the FIFA World Cup Qatar 2022 have followed a peculiar pattern: It defeated the group-winner Portugal in the finale, tied with the next highest-ranked Uruguay 0-0, and was beaten by the lowest-ranked Ghana 3-2.

Would the pattern continue when the Taegeuk Warriors play against the five-time World Cup champion Brazil at 10 p.m. Monday, or 4 a.m. Tuesday in Korea?

The Korean team has indeed shown in the past -- mostly during the Koreans' miraculous run to the semifinals in 2002 -- an uncanny ability to knock out championship contenders out of the World Cup stages. Here are some occasions the team has pulled off surprise upsets. 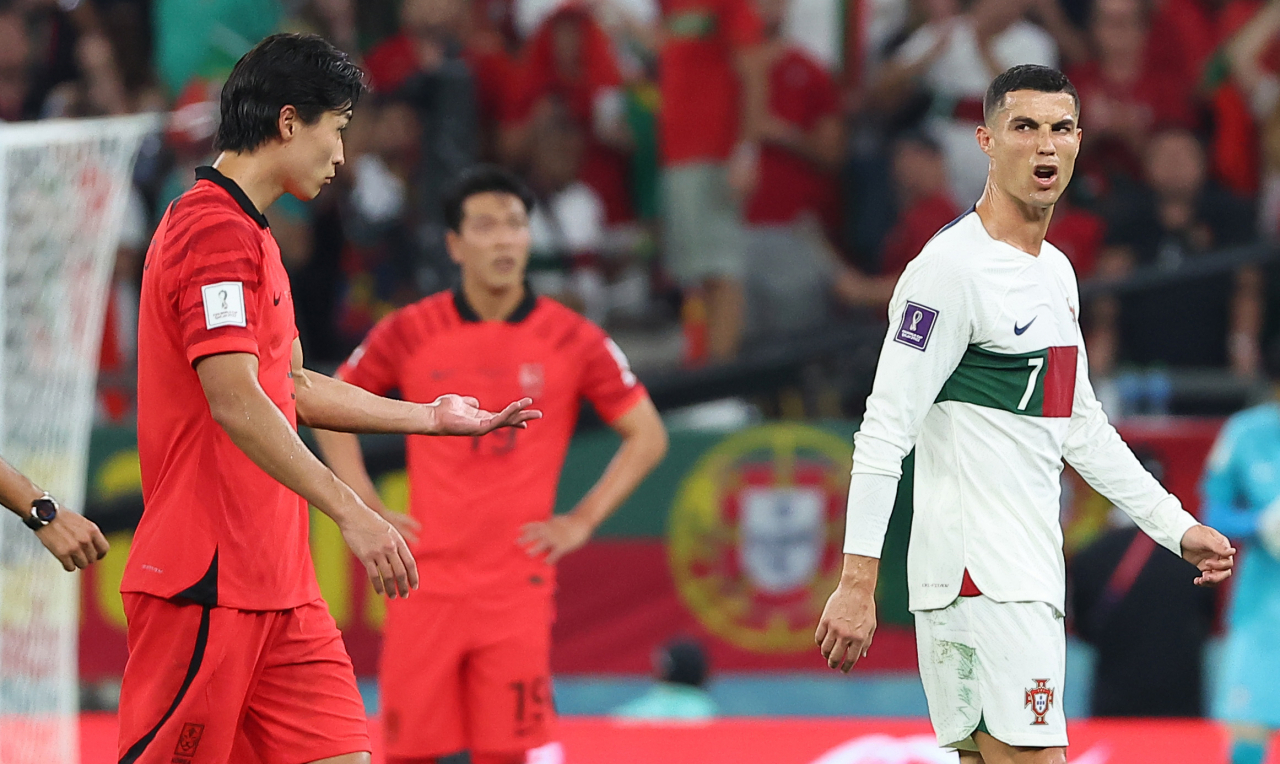 The Korea Herald previously introduced how South Korean fans hoped their team would beat the heavily favored Portugal squad in the article “‘Again 2002’ is on fans' minds as South Korea faces Portugal in do-or-die match.” The so-called “Hiddink Magic” -- by Dutch manager Guus Hiddink did not end there.

The situation was not ideal for South Korea heading into the top 16. As the winner of Group D, it was to face the runner-up for Group G, which would normally mean avoiding championship contenders.

But Italy’s unexpected loss to underdog Croatia resulted in them being the runner-ups for Group G, meaning South Korea had to face a strong contender for the second straight game.

Faced with a mighty foe, Koreans started off with a mind game. Red Devils, the official supporters club for the South Korean national team, organized a card stunt that flashed the message “Again 1966,” referring to North Korea’s shocking upset against Italy that resulted in their elimination.

The game itself was a physical one, with South Korea’s Kim Tae-Young suffering a face injury that required him to wear a protective mask for the remainder of the tournament. Things did not get better as Korea’s top striker, Ahn Jung-hwan, blew a penalty kick early in the first half.

The first goal of the match came off the header by Italy’s Christian Vieri, after which Gli Azzurri locked up the field with its famous defense. In desperate need of an equalizer, Hiddink took a gamble by taking out players including captain and defensive anchor Hong Myung-bo while playing five forwards at one time.

The gamble paid off when Seol Ki-Hyeon, with two minutes left in the regulation, made the most of an Italian error for a left-footed shot that went into the net.

The game went into overtime, which had a now-abolished "Golden Goal" system -- whichever team that scores first in overtime immediately wins the match. Thirteen minutes into the match, Francesco Totti dived with minimal contact from the defenders, which was ruled a flop and resulted in a red card and an immediate ejection.

Koreans now had the upper hand, and 27 minutes into overtime, Lee Young-pyo’s pass connected to Ahn Jung-hwan for the game-winning header.

The victory made South Korea the second Asian team in history to make the top eight in the World Cup stage. Hiddink, however, was far from satisfied as he uttered the famous words, “I’m still hungry.” 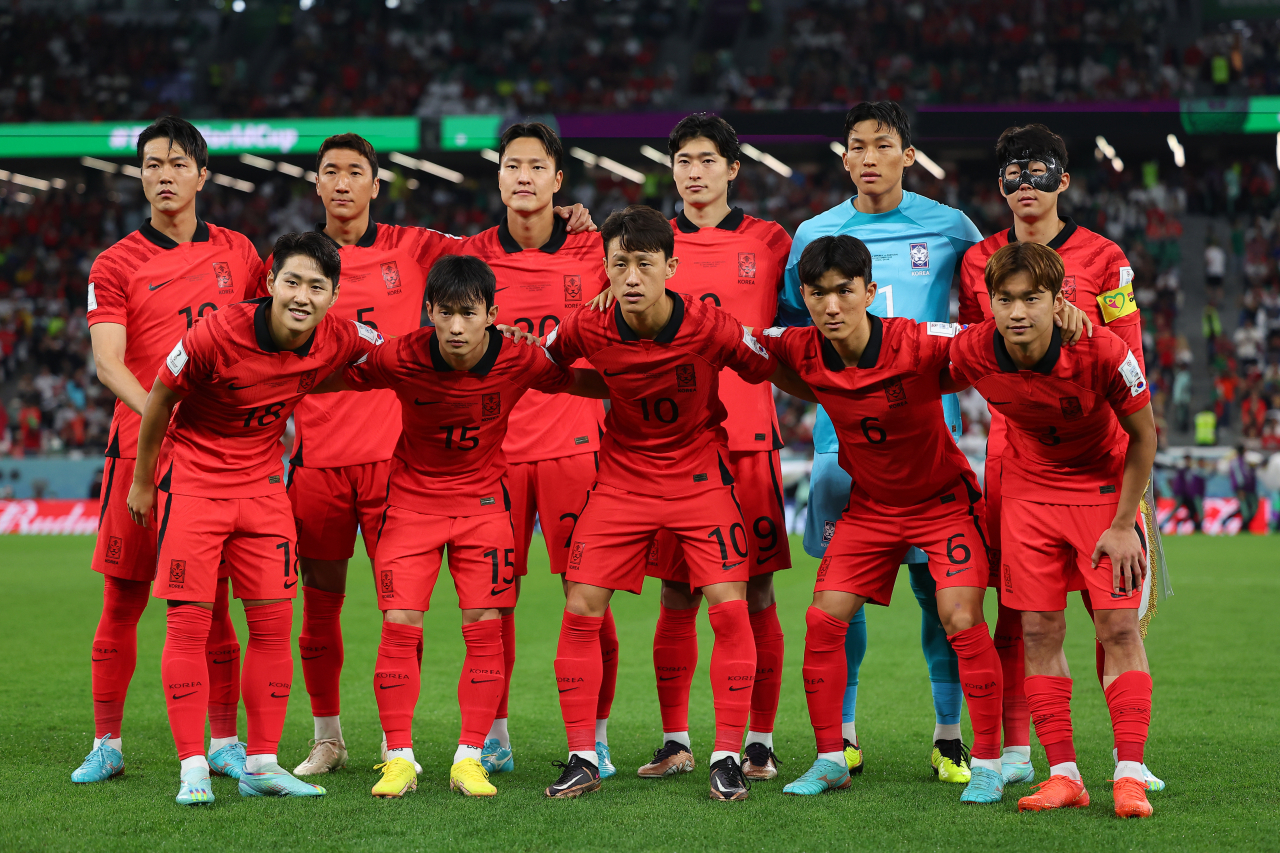 The South Korean team takes a group photo ahead of the team's Group H finale against Portugal in the FIFA World Cup Qatar 2022 at the Education City Stadium at Al Rayyan, Qatar, on Friday. (Yonhap)

Up next was the well-rested Spain, who had two more days off compared to the Taegeuk Warriors. It marked the third time the two countries had met in the World Cup, with South Korea losing one and holding Spain to a draw in the second.

With the weary Koreans barely keeping up with the Spaniards, the game went into overtime. South Korean fans held their collective breaths when a header by Fernando Morientes of Spain went into the Korean net, but the goal was waved off as officials called an offside violation.

Neither team scored for the remainder of the overtime, and the game would be decided by a penalty shoot-off.

The first three shooters for both teams all made their shots, but after South Korea’s fourth kicker Ahn netted a goal, it was Joaquin Sanchez’s turn. The Spaniard faked once but South Korean goalkeeper Lee Woon-jae read his directions perfectly to punch the ball out.

With the game on the line, the final kicker for South Korea was captain Hong. The man, known for his calm demeanor and clutch abilities, squared up the shot and made the goal. After the winning goal, the usually reserved and quiet Hong erupted with excitement and celebrated with his younger teammates, marking a perfect finish to a dramatic upset over the heavily favored La Furia Roja.

Although South Korea would eventually lose to Germany in the semifinals, the three consecutive victories over the European powerhouses remain one of the most memorable moments in the country’s sports history. 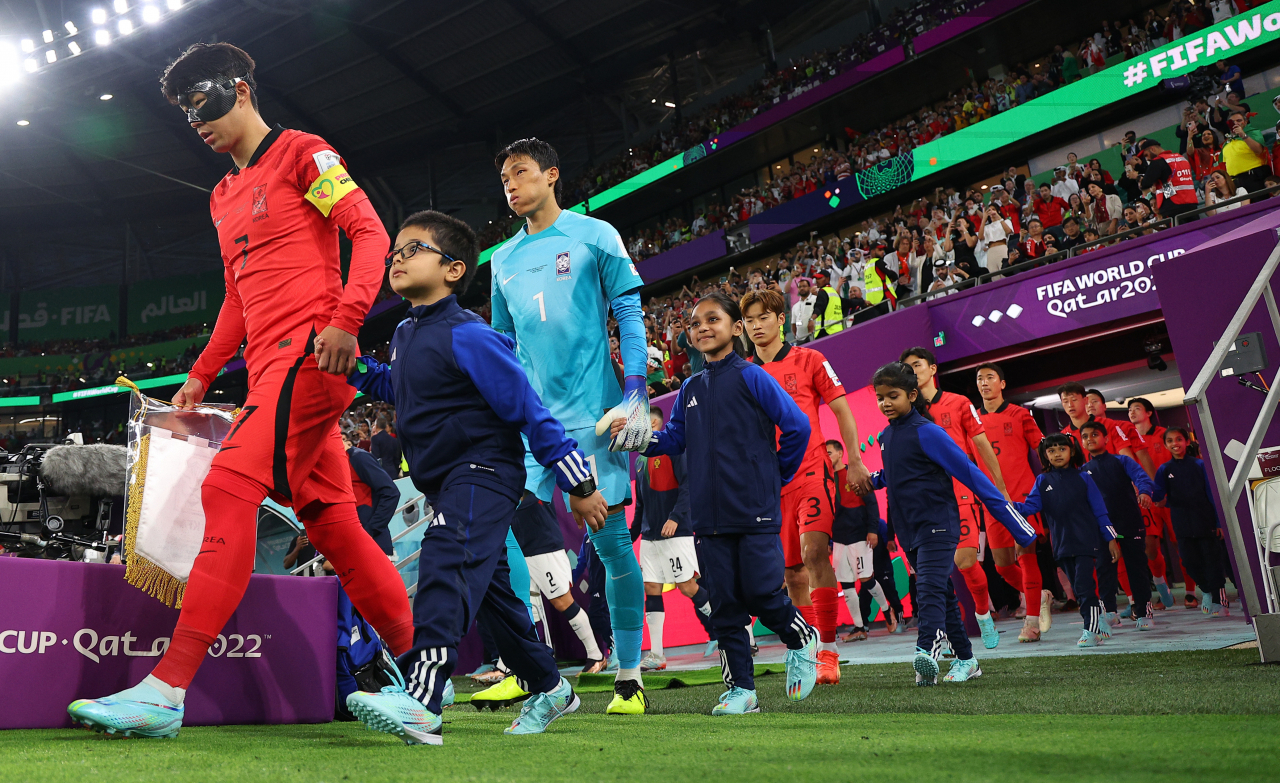 2018: Knocking Germany out of the group stage

Gary Lineker famously said, “Football is a simple game. Twenty-two men chase a ball for 90 minutes and at the end, the Germans always win.” Just as the English soccer legend said, Germany has been a legendary team, with a winning streak of 16 straight games to the top eight in the World Cup stages that lasted until prior to the 2018 FIFA World Cup.

Then the top ranked team in the world, Die Mannschaft was heavily favored to go deep into the knockout stage of the 2018 World Cup in Russia. But their prospects dimmed after Mexico’s 1-0 upset over them in the opening match. Even though the Germans took the second game against Sweden, they badly needed a win against South Korea to ensure their survival, a feat that seemed likely against the team that dropped both previous games.

But things did not go their way as the pesky South Korean defense prevented them from scoring. The two teams ended the regulation scoreless, and additional time ensued.

This was when a fatal error by the Germans resulted in the ball landing in front of South Korean defender Kim Young-gown, who calmly scored into the right corner off his left foot. Desperate, the Germans went all-out on the offensive, with even the goalkeeper Manuel Neuer playing in the midfield.

It was then South Korea’s Ju Se-jong stole the ball from Neuer and hailed a long pass to Son Heung-min. Son made a desperate sprint to the empty German goal post and tapped the ball in for the second and final goal of the match.

Although both teams ended up being eliminated from the World Cup, South Korea took pride in defeating the defending champions and dubbed it the “Miracle of Kazan.”

The world was stunned by the result. Lineker later posted a revised version of his famous quote on Twitter: “Football is a simple game. Twenty-two men chase a ball for 90 minutes and at the end, the Germans no longer always win. Previous version is confined to history.”