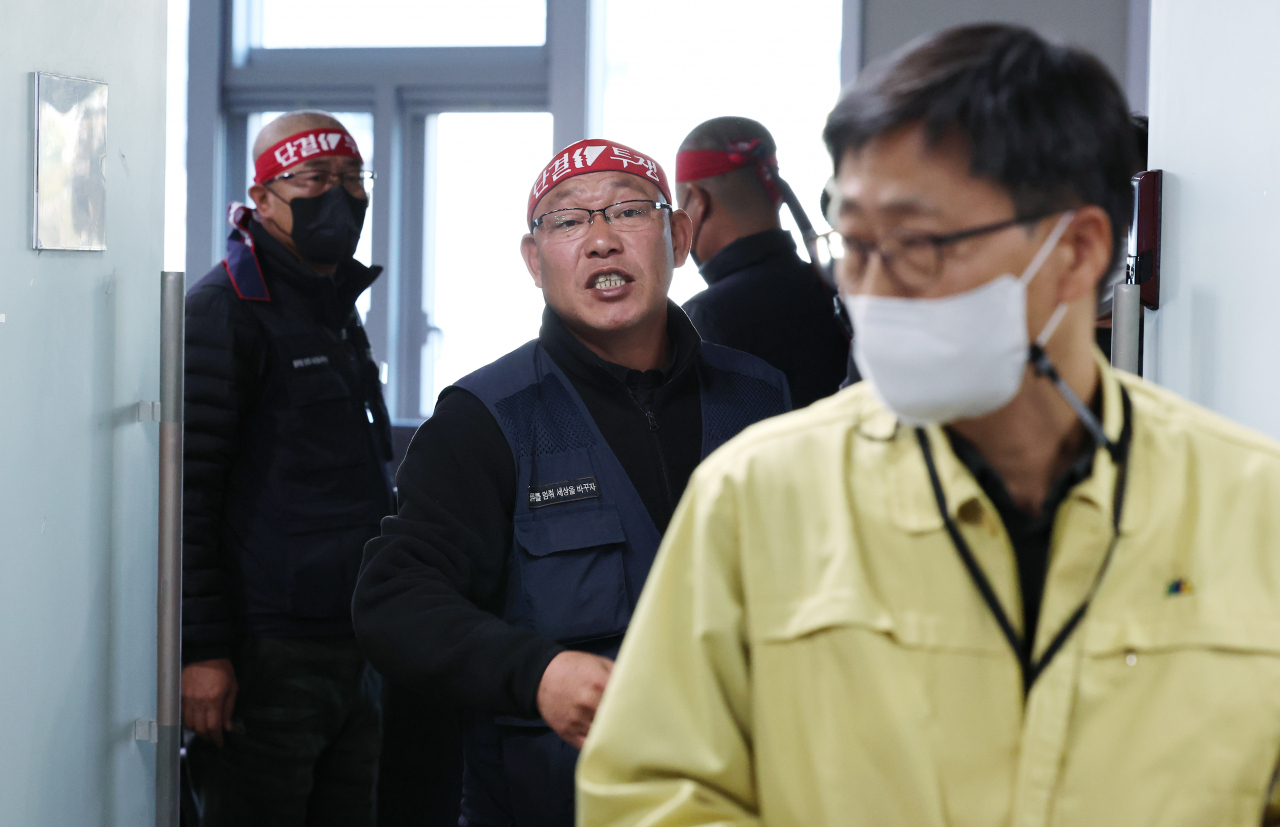 Representatives of the truckers’ union and government officials failed to reach a compromise again in their second round of talks on Wednesday amid a week-long strike by unionists that inevitably could impact an array of industries.

Starting from Nov. 24, Cargo Truckers Solidarity has been staging a walkout mainly to call for a permanent guarantee of minimum freight rates, which is to expire at the end of this year.

The minimum freight rate policy was created to prevent truckers from overworking, overloading, and speeding by guaranteeing a minimum annual wage. It imposes a fine on shippers that pay less than the minimum amount.

The talk which began at 2 p.m. ended only after about 40 minutes when the Ministry of Land, Infrastructure and Transport Director Koo Heon-sang walked out of the meeting room, while the Cargo Truckers Solidarity representative Kim Tae-young was shouting in protest.

“We requested the cargo trucker’s union to return to work as soon as possible as there has been huge damage done to the nation's economy caused by them refusing to transport while holding the people as hostages,” Koo said after the meeting.

“The Yoon Seok-yeol administration and the Ministry of Land, Infrastructure and Transport are not willing to talk at all. We came here to negotiate, but failed to continue the conversation as the government said it is non-negotiable,” the Cargo Truckers Solidarity representative said.

The schedule for their next talk has not yet been decided.

In addition, Kim Eun-hye, senior presidential secretary for press affairs, made an announcement on Wednesday there will not be any compromise with the truckers.

“If the government does not resolve labor-management issues in accordance with the laws and principles, and compromises case by case, it could lead to another strike or illegal act, so for the safety and convenience of the people, we want to wisely deal with the current crisis,” Kim said. 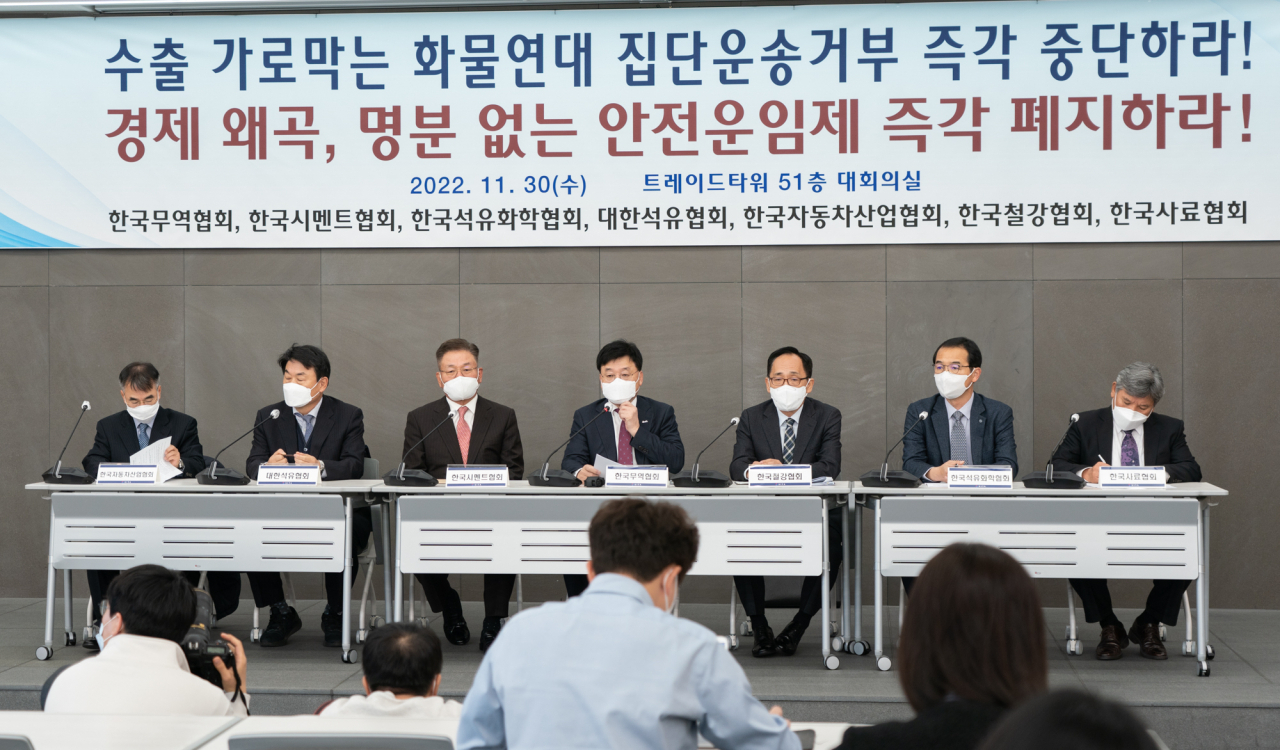 “The government and the National Assembly should not compromise with the call (permanent guarantee of minimum freight rates) as a makeshift measure to reduce the economic damage caused by the collective action,” Jeong stressed during a press conference held to discuss the Cargo Truckers Solidarity strike on Wednesday at the Trade Tower in Seoul's eastern Samseong-dong.

The KITA executive vice chairman went on and claimed that the minimum freight rates should not have been applied from the beginning.

“In 2020, the former government introduced and implemented a three-year temporary policy, which was scheduled to end at the end of this year. It is questionable whether the introduction of this policy was adequate in the first place,” Jeong said.

The vice chairman argued the government did not need to intervene and create the policy because there were no market failures in the industry.

Concerning the issue of the truckers' safety, which has served as the main reason behind the application of the minimum freight rates policy, Jeong said the relevance between the policy and the safety of truckers is low.

Korea Cement Association Vice Chief Lee Chang-ki also took part in this press conference and talked about damages incurred by the cement industry due to the walkout.

“Domestic daily demand for cement is about 180,000 to 200,000 tons in the peak season,” Lee said. “We are seeing a huge sales loss of 18 billion won ($13.7 million) per day as less than 10 percent of the usual amount is being shipped, so the business deterioration of the cement industry is gradually getting worse.”

Just a day before the conference, President Yoon Suk-yeol ordered some 2,500 cement cargo truck drivers at over 200 companies across the nation to stop their strike and return to work on the sixth day of the walkout.

“If the strike continues, it is inevitable to shut down some production facilities from this weekend as cement storage space will soon be full,” Korea Cement Association representative Lee added.

Petroleum Association Vice Chairman Jeong Dong-chang highlighted that due to the recent strike, a few of the gas stations started experiencing a fuel supply disruption.

According to the Ministry of Trade, Industry and Energy’s data, as of Tuesday at 4 p.m., 21 gas stations -- 17 in Seoul, three in Gyeonggi Province and one in Incheon -- had run out of gasoline or diesel.

“We estimate those tanker truck drivers who are members of the Cargo Truckers Solidarity union reach over 70 percent countrywide and more than 90 percent in the Seoul metropolitan area,” Petroleum Association Vice Chairman Jeong Dong-chang said. “If the strike prolongs, we are concerned that there will be a serious petroleum supply disruption.”