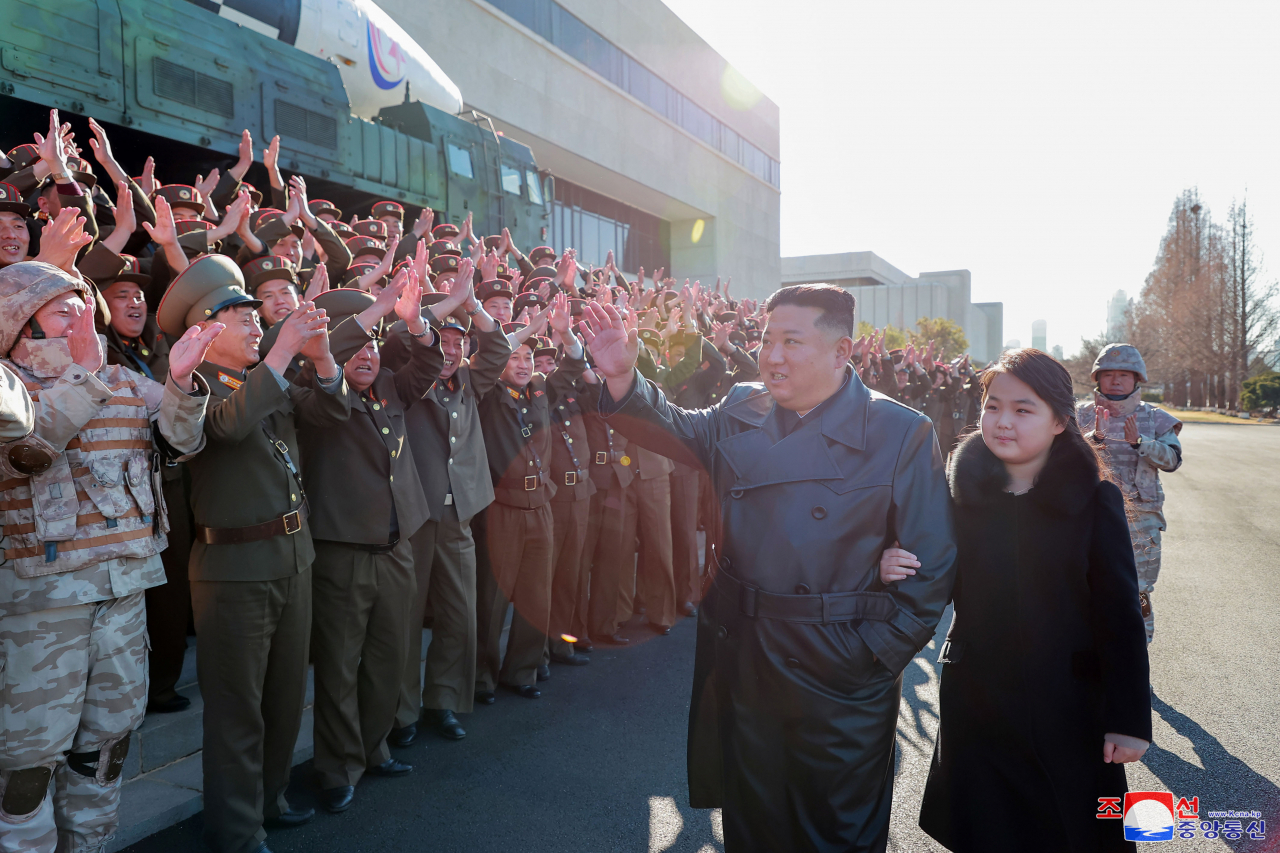 North Korean leader Kim Jong-un (L) walks hand in hand with his daughter, presumed to be his second child, Ju-ae, during a photo session with officials involved in this month's intercontinental ballistic missile launch, in this photo provided by the Korean Central News Agency on Nov. 27, 2022. (Yonhap)

North Korean leader Kim Jong-un pledged to make the country’s military strength “more absolute and irreversible” and push for nuclear buildup at an “exceptionally rapid speed” at a pseudo-event celebrating the successful launch of the new Hwasong-17 intercontinental ballistic missile where he brought his second daughter Kim Ju-ae again.

“It is the truth taught by history that only when we become the strongest, not the weak, in the present world where the strength in showdown just decides victory, can we defend the present and future of the country and nation,” Kim was quoted as saying in an English-language report released by Korean Central News Agency on Sunday.

“We should consolidate our greatest strength seized firmly with two hands as more absolute and irreversible one, never resting on our laurels, and continue to put spurs to the limitless bolstering of the defense capabilities.”

Kim made the remarks while taking a group photograph with “combatants of the Red Flag Company,” officials, scientists and technicians of a defense science research institution and workers of a munitions factory who “made a great contribution” to the Hwasong-17 ICBM launch on Nov. 18, KCNA reported without providing further details including the date and venue.

Ju-ae -- who has been confirmed by the South Korean spy agency as Kim’s second daughter and was born in 2013 -- also made her second appearance at the staged photo-op following her first public appearance at the Hwasong-17 test launch. North Korean state media labeled her as Kim’s “beloved daughter.”

Kim, in front of his daughter, expressed his confidence that North Korea’s self-defense capability would be put in the “position of the world’s strongest.” Painting a bright picture for the future of the country, Kim also showed his belief that scientists, technicians and workers “can expand and bolster up the nuclear war deterrent of the country at an exceptionally rapid speed.”

North Korean scientists, technicians, workers and officials also pledged to “perfectly materialize the strategic plan of the Party Central Committee” by developing advanced weapons requested by the party successfully and successively in a letter sent to Kim on Nov. 21, KCNA reported on Sunday.

Yang Moo-jin, a professor at the University of North Korean Studies in Seoul, said North Korea also “intended to strengthen the solidarity of its regime by stepping up propaganda two days before the anniversary of declaring the completion of the state nuclear force.”

Against that backdrop, Yang saw slim chances of North Korea conducting a high-profile nuclear test or an ICBM launch on the occasion of the fifth anniversary.

“It’s highly likely that North Korea will solely promote achievements without a separate event on the fifth anniversary as the country assesses that it has already achieved its objectives, including demonstrating nuclear forces, through the successful launch of the Hwasong-17,” Yang said. “But we could expect the country to launch short and medium-range ballistic missiles aimed at sounding salute and maintaining tensions.”

The North Korean leader on Saturday also issued an order to “promote the military ranks of leading officials and scientists in the defense scientific research field who strikingly demonstrated to the whole world the powerful strength of the DPRK's strategic force,” state media reported the following day.

More than 100 personnel were on the list of promotions. Among them, Jang Chang-ha, chief of the Academy of National Defense Science, and Kim Jong-sik, vice department director of the Munitions Industry of the Party Central Committee, have been promoted to generals.

In the order, Kim notably said his nuclear buildup’s “ultimate goal is to possess the world’s most powerful strategic force, the absolute force unprecedented in the century.”

The Standing Committee of the rubber-stamp Supreme People’s Assembly on Saturday also for the first time issued a decree on “awarding the title of DPRK Hero and Gold Star Medal and Order of National Flag 1st Class” to the Hwasong-17’s transporter erector launcher vehicle, KCNA reported on Sunday.

In the decree, the North Korean parliamentary reiterated its tit-for-tat strategy, saying the Hwasong-17 launch is a “historic event that solemnly declared the toughest will of the Workers’ Party of Korea and the DPRK government to react to the enemy’s nuke and full-frontal confrontation in kind.”