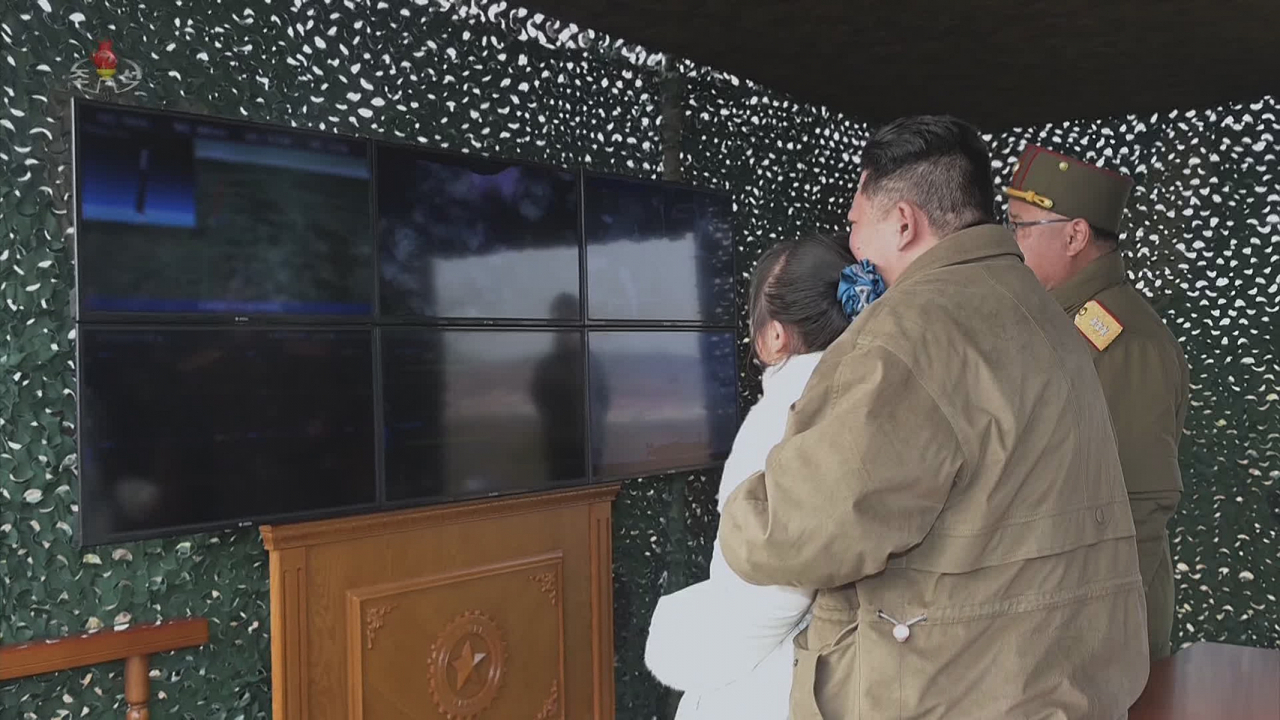 North Korean leader Kim Jong-un watches the missile launch with his daughter in this photo released by the Korean Central News Agency on Saturday. (Yonhap)

On Friday, Korean Central News Agency, North Korea’s state-run media released a slew of photos of the North Korean leader holding hands with a young girl wearing a white jacket and red shoes. The news agency said Kim inspected the launch of its new strategic weapon Hwasong-17, an intercontinental ballistic missile, with his wife Ri Sol-ju and “beloved daughter.” But it did not reveal more details about the girl.

Seoul's National Intelligence Service confirmed the young girl is Kim Ju-ae, born in 2013, and she is the second child of the North Korean leader, in a closed-door briefing to the parliamentary intelligence committee on Tuesday.

“The NIS believe the daughter who accompanied (Kim Jong-un) in the launch of the intercontinental ballistic missile is the second child, Ju-ae,” Rep. Yoo Sang-bum of the People Power Party, who is a member of the intelligence committee at the National Assembly, told reporters.

“It was somewhat uncertain as she was bigger (in physique) than an average 10-year old girl, but it matched the information the NIS already had about her,” Yoo added.

On Kim’s intention for bringing his young daughter to the missile test site, the NIS viewed the North Korean leader intended to show he is determined to safeguard the security of the future generation.

The NIS also suggested additional provocations from the North, including its seventh nuclear test, is highly likely.

“North Korea’s goal is completion of its nuclear weapon and missiles, so (the NIS) believes additional provocations are always likely and (the NIS) also sees a high possibility of a seventh nuclear test (by the North),” Rep. Yoo said.

Pyongyang appears to have succeeded in launching the Hwasong-17, known to be its biggest missile capable of carrying multiple warheads. Intelligence authorities of the US and Japan believe the ICBM can fly as far as 15,000 kilometers -- enough to reach the US mainland.