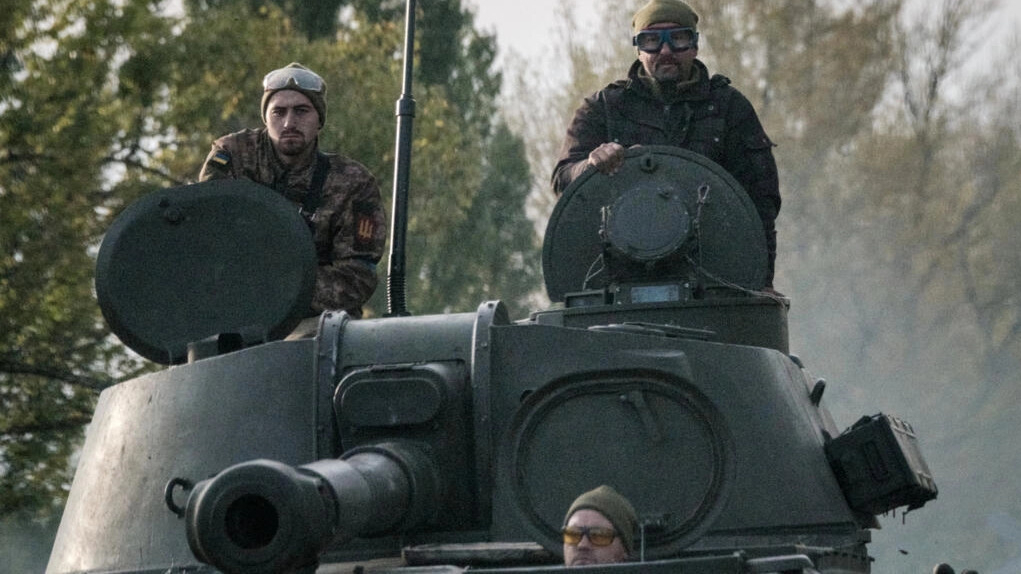 MYKOLAIVKA, Ukraine -- Ukraine's President Volodymyr Zelensky said Sunday that Lyman, a key town located in one of four Ukrainian regions annexed by Russia, had been "cleared" of Moscow's troops.

The latest development in Ukraine's weeks-long counter-offensive against Moscow's invasion comes as Russia pushed forward with finalising the annexation of captured Ukrainian territories despite condemnation from Kyiv and the West.

The recapture of Lyman -- which Moscow's forces pummelled for weeks to control earlier this year -- marks the first Ukrainian military victory in a territory the Kremlin has claimed as its own and vowed to defend by all possible means.

Ukraine's army said it had entered Lyman, a strategic railway hub in the eastern Donetsk region, on Saturday, prompting Moscow to announce the "withdrawal" of its troops from the town towards "more favourable lines."

The recapture of Lyman had become the most popular story in the media, Zelensky noted in his Sunday evening address. "But the successes of our soldiers are not limited to Lyman," he added.

The previous day he had pledged to retake more areas in the country's eastern Donbas region within the week.

"Now I am optimistic and very motivated," a 33-year-old Ukrainian soldier using the nom de guerre "Smoke," told AFP after returning from near Lyman.

"I see the activity on the front line, and how foreign weapons... help us take our lands back."

Kyiv got a further boost Sunday when Berlin said Germany, Denmark and Norway would deliver 16 armoured howitzer artillery systems from 2023.

The three NATO members had agreed to jointly finance the procurement of the Slovakian Zuzana-2 guns, the German defence ministry said, although the announcement falls short of Kyiv's demands for Germany's Leopard battle tanks.

With Russian losses mounting, some experts have warned that President Vladimir Putin could turn to nuclear weapons -- an option floated by one Putin

Putin staged a grand Kremlin ceremony on Friday to celebrate the annexation of the four Ukrainian territories -- Donetsk, Kherson, Lugansk and Zaporizhzhia -- following referendums denounced as void by Kyiv and its allies.

Despite condemnation from the West, Russia's Constitutional Court on Sunday recognised as lawful the annexation accords Putin signed with the Moscow-backed leaders of the four Ukrainian territories.

The annexation treaties will be considered by Russia's lower house of parliament, the State Duma, on Monday, according to Duma speaker Vyacheslav Volodin.

Pope Francis on Sunday "implored" Putin to stop the "spiral of violence and death," condemning the annexations as breaches of international law.

The four territories create a crucial land corridor between Russia and the Crimean Peninsula, which was annexed by Moscow in 2014.

Together the five regions make up around 20 percent of Ukraine.

Kyiv has also called for the immediate release of Ihor Murashov, the chief of the Moscow-held Zaporizhzhia nuclear power plant, condemning his "illegal detention" by the Russians on Friday.

"This is another manifestation of completely frank Russian terror," Zelensky said Sunday.

Washington and its allies would "impose severe costs" on any individual or entity that backed Russia's "purported" annexations, said Sullivan, according to a statement from his office.

In a statement from the International Atomic Energy Agency (IAEA), its chief Rafael Grossi said Murashov's detention was cause for "grave concern."

Grossi is expected to travel to Kyiv and Moscow "next week," the UN agency added.

Zaporizhzhia -- Europe's largest nuclear energy facility -- has been at the center of tensions, with Moscow and Kyiv accusing each other of strikes on and near the plant, raising fears of an atomic disaster.

He also vowed never to hold talks with Russia as long as Putin remains in power.

NATO chief Jens Stoltenberg slammed the annexations as "illegal and illegitimate" but remained non-committal after Ukraine said it was applying to join the Western alliance. (AFP)