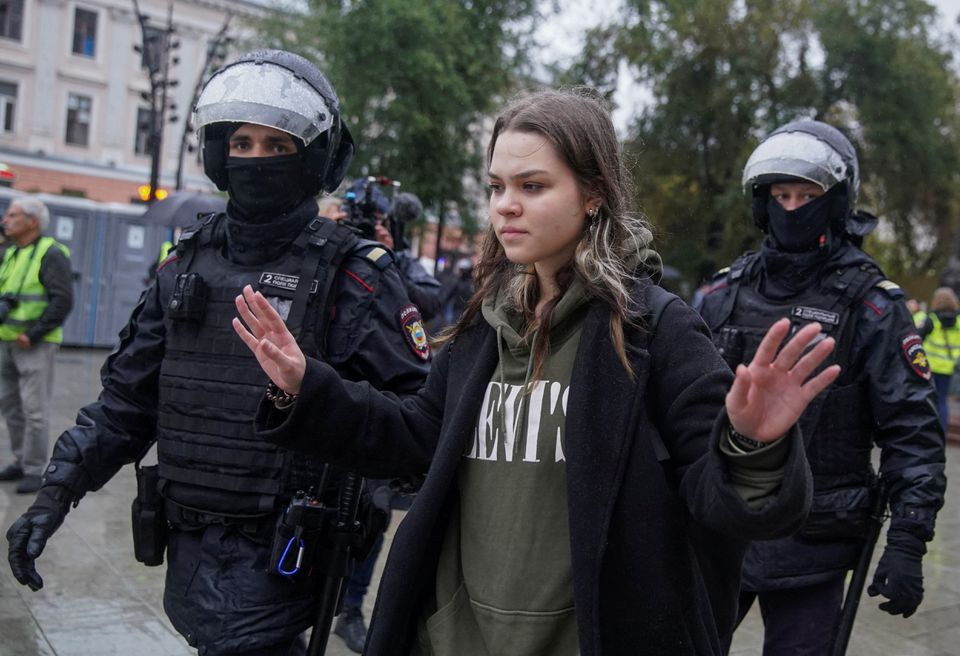 Russian law enforcement officers lead away a person during a rally, after opposition activists called for street protests against the mobilization of reservists ordered by President Vladimir Putin, in Moscow, Russia Sunday. (Reuters-Yonhap)

LONDON -- The strongly pro-Kremlin editor of Russia's state-run RT news channel expressed anger on Saturday that enlistment officers were sending call-up papers to the wrong men, as frustration about a military mobilization grew.

Wednesday's announcement of Russia's first public mobilization since World War Two, to shore up its faltering Ukraine war, has triggered a rush for the border, the arrests of over 1,000 protesters, and unease in the wider population.

It is also attracting criticism from the Kremlin's own official supporters, something almost unheard of in Russia since the invasion began.

"It has been announced that privates can be recruited up to the age of 35. Summonses are going to 40-year-olds," the RT editor-in-chief, Margarita Simonyan, railed on her Telegram channel.

"They're infuriating people, as if on purpose, as if out of spite. As if they'd been sent by Kyiv."

In another rare sign of turmoil, the defense ministry said that the deputy minister in charge of logistics, General Dmitry Bulgakov, had been replaced "for transfer to another role" with Col. Gen. Mikhail Mizintsev, a long-time army official.

Mizintsev, under the UK, European Union and Australian sanctions, has been referred to by the EU as the "Butcher of Mariupol" for his role in orchestrating a siege of the Ukrainian port early in the war that killed thousands of civilians.

Russia appears set to formally annex a swathe of Ukrainian territory next week, according to Russia's main news agencies. This follows so-called referendums in four occupied regions of Ukraine that began on Friday. Kyiv and the West have denounced the votes as a sham and said outcomes in favor of annexation are pre-determined.

For the mobilization effort, officials have said 300,000 troops are needed, with priority given to people with recent military experience and vital skills. The Kremlin denies reports by two foreign-based Russian news outlets that the real target is more than 1 million.

Ukrainian President Volodymyr Zelensky - who has repeatedly urged Russians not to fight - said pro-Moscow authorities knew they were sending people to their deaths.

"Running away from this criminal mobilization is better than being maimed and then having to answer in court for having taken part in an aggressive war," he said in Russian in a video address on Saturday.

Russia officially counts millions of former conscripts as reservists - most of the male population of fighting age - and Wednesday's decree announcing the "partial mobilization" gave no criteria for who would be called up.

Reports have surfaced of men with no military experience or past draft age receiving call-up papers, adding to outrage that has revived dormant - and banned - anti-war demonstrations.

More than 1,300 protesters were arrested in 38 towns on Wednesday, and on Saturday evening more than 740 were detained in over 30 towns and cities from St. Petersburg to Siberia, according to the independent monitoring group OVD-Info.

Reuters images from St. Petersburg showed police in helmets and riot gear pinning protesters to the ground and kicking one of them before carrying them into vans.

Earlier, the head of the Kremlin's Human Rights Council, Valery Fadeyev, announced he had written to Defence Minister Sergei Shoigu with a request to "urgently resolve" problems.

His Telegram posting criticized the way exemptions were being applied and listed cases of inappropriate enlistment including nurses and midwives with no military experience.

"Some (recruiters) hand over the call-up papers at 2 a.m., as if they think we're all draft dodgers," he said.

On Friday, the defense ministry listed some sectors in which employers could nominate staff for exemptions.

There has been a particular outcry among ethnic minorities in remote, poor areas in Siberia, where Russia's professional armed forces have long recruited disproportionately.

Since Wednesday, people have queued for hours to cross into Mongolia, Kazakhstan, Finland or Georgia, scared Russia might close its borders, although the Kremlin says reports of an exodus are exaggerated.

Asked by reporters at the United Nations on Saturday why so many Russians were leaving, Foreign Minister Sergei Lavrov pointed to the right of freedom of movement.

The governor of Buryatia, a region which adjoins Mongolia and is home to an ethnic Mongol minority, acknowledged some had wrongly received papers and said those without military experience or who had medical exemptions would be exempt.

On Saturday, Tsakhia Elbegdorj, president of Mongolia until 2017 and now head of the World Mongol Federation, promised those fleeing the draft, especially three Russian Mongol groups, a warm welcome, and bluntly called on Putin to end the war.

"The Buryat Mongols, Tuva Mongols, and Kalmyk Mongols have ... been used as nothing more than cannon fodder," he said in a video, wearing a ribbon in Ukrainian yellow-and-blue.

"Today you are fleeing brutality, cruelty, and likely death. Tomorrow you will start freeing your country from dictatorship."

The mobilization, and the hasty organization of the votes in occupied territories, came soon after a lightning Ukrainian offensive in the Kharkiv region this month - Moscow's sharpest reverse of the war. (Reuters)