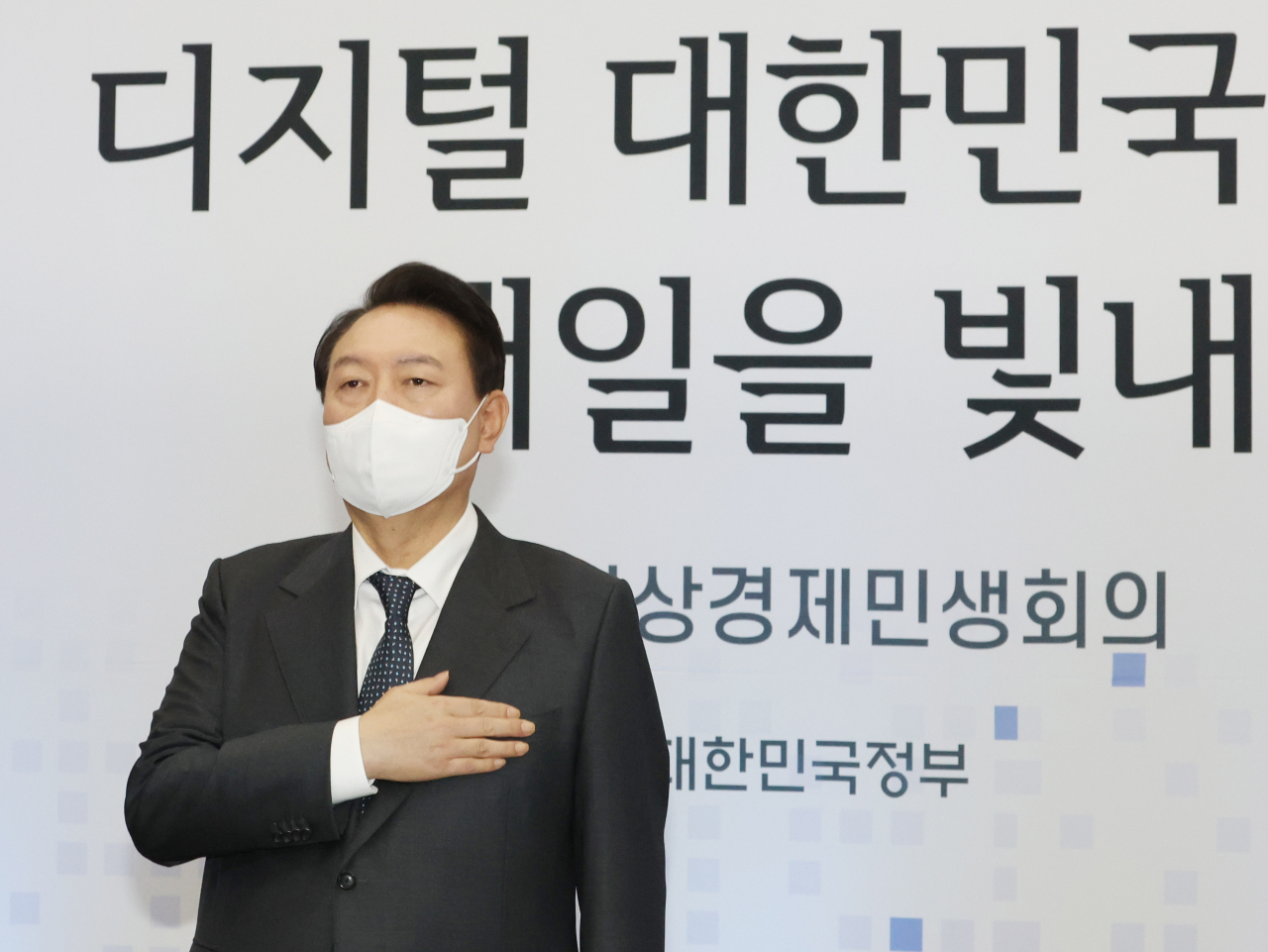 President Yoon Suk-yeol salutes the flag during the eighth pangovernmental meeting on economy and people's livelihood at the Kimdaejung Convention Center in Gwangju. (Yonhap)
The South Korean government on Wednesday unveiled a blueprint to become a global leader in digital innovation with the goal of becoming the world's third most digitally competitive by 2027.

"We will bring up our global (artificial intelligence) competitiveness to No. 3 in the world and double the data market size to 50 trillion won ($34.7 billion) or bigger," said President Yoon Suk-yeol as he chaired the eighth pangovernmental meeting on economy and people's livelihood at the Kimdaejung Convention Center in Gwangju.

The announcement of the blueprint followed Yoon's consecutive speeches on the importance of combined efforts to decrease the digital gap across the world at the United Nations General Assembly and the role of digital technologies in expanding freedom for all at the Digital Vision Forum held by New York University in New York last week.

Under the blueprint, the Ministry of Science and ICT set out five main strategies and 19 objectives. The strategies focus on securing world-leading digital abilities, expanding the digital economy, creating a digitally inclusive society, establishing a digital platform government and innovating digital culture.

The government will intensively invest in research and development for artificial intelligence, AI semiconductors, 5G and 6G networks, quantum, metaverse and cybersecurity, the ministry said.

Korea has allocated 1.02 trillion won for securing core technologies of AI semiconductors and 302 billion won for developing next-generation AI technologies through 2026. The plan includes fostering over 2,000 software service companies by 2027.

According to the ministry, the government will aim to complete setting up the infrastructure for a nationwide 5G network by 2024 and secure the standard patent for 6G technology while pushing for a trial service of the world’s first pre-6G network in 2026.

The ministry expects the country to increase its competency in digital technology, industry and talent under the blueprint to earn it the No. 3 spot on the Swiss International Institute for Management Development’s annual world digital competitiveness rankings in 2027.

According to the IMD’s world digital competitiveness rankings released earlier in the day, Korea ranked eighth among the 63 countries assessed by the IMD. Korea climbed four spots from the previous year’s rankings.

Of the countries with a population of 20 million or more, Korea took the No. 2 spot, only behind the US. The IMD rated Seoul’s adaptability to new technology as the world’s best and the country’s business agility as the second best among the 63 evaluated countries.

“The Korean digital strategy is our country’s digital blueprint and we have drafted the state-level policy to show our strong will to move toward leading global digital innovation, which was declared through the ‘New York Plan,’” said Lee Jong-ho, minister at the Ministry of Science and ICT.

“Combining all of the government capabilities, we will carry out the strategies to create results that the public can actually feel and share the outcome with people across the world as an exemplary country of digital innovation.”