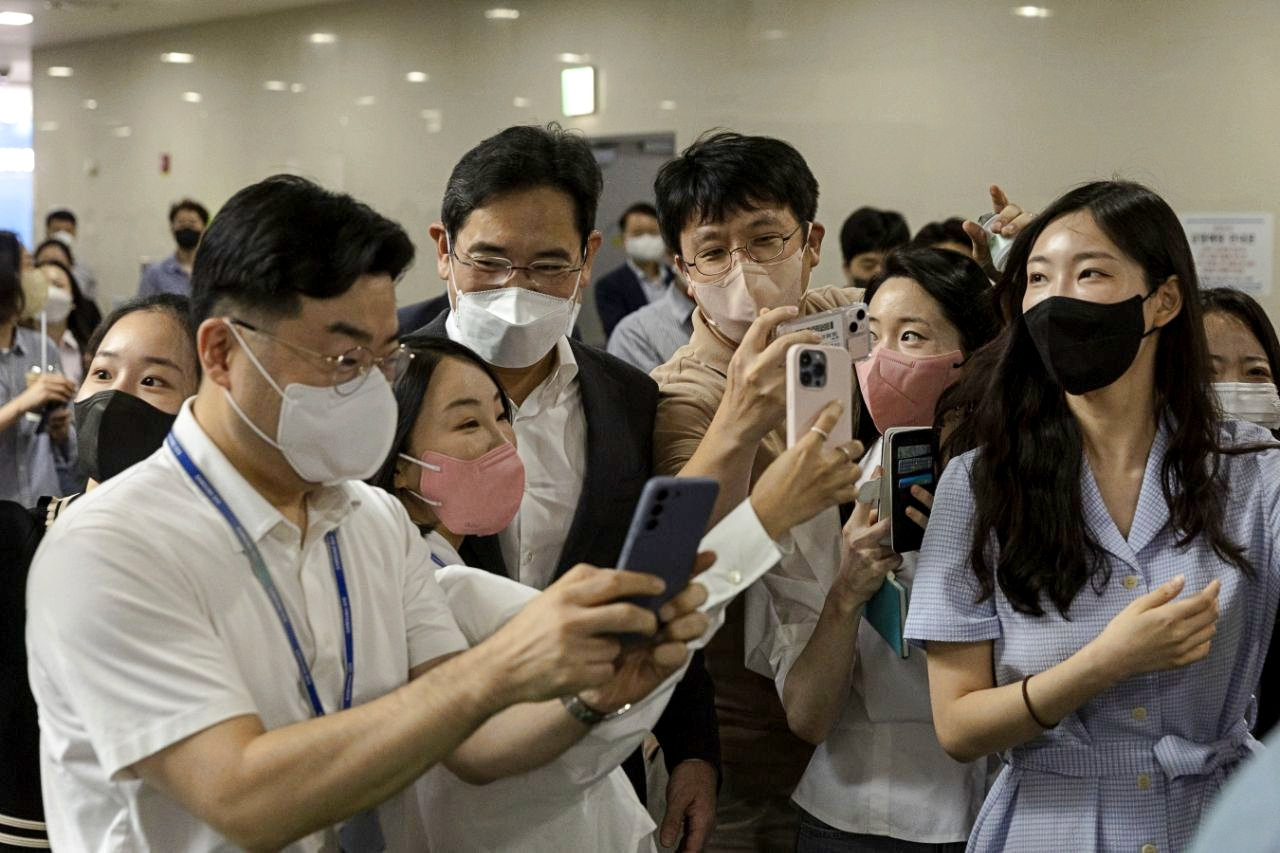 Taking selfies with rank-and-file employees and lining up for a lunch queue for a simple meal instead of a juicy steak is something that many didn't expect to see from Samsung Electronics Vice Chairman Lee Jae-yong, the most powerful business tycoon in South Korea.

The 54-year-old third-generation chaebol scion has long lived a life away from the public eye, except in the past five years, when he made frequent headlines over his involvement in a high-profile bribery scandal. But as he gets closer to taking over his late father’s chairman post, he seems to be exhibiting a different image of a business tycoon from generations before him, which in turn has created a unique fanbase.

On Instagram, the fan account jaeyong3831 documents every one of Lee's public appearances, including a sweet father-daughter moment at a chaebol wedding and a portrait of him drawn by an unknown user. The account has 148,000 followers as of September, and is filled with comments praising Lee‘s humility and rooting for his success in his incoming role as the chairman of Samsung Electronics -- a company that many Koreans feel attached to.

"I support you anytime, anywhere in any circumstances ... just for being who you are," wrote one follower. "I am so proud to have a businessman like you in our country. I pray for your happiness," commented another.

Lee is trying to build a direct connection to the younger generation, a move experts note is inevitable given the current rapid generational shift in the corporate world.

Lee’s father Lee Kun-hee was a charismatic leader who turned Samsung into a global technology powerhouse, while his grandfather Lee Byung-chul spearheaded the "Miracle on the Han River" with the principle of patriotic industrial service for the formerly poverty-stricken nation.

In eyes of the public today, Lee Jae-yong is seen as a "humble" business leader who bears the heavy burden of leading the future of Korea’s beloved electronic giant.

"Chaebol entrepreneurs have often hidden behind a curtain and spoken in an authoritative tone, sometimes in a rude manner. So a chaebol leader portrayed by the media as having a down-to-earth personality distances him or her from the conventional image of chaebol leaders," said Kwon Sang-jib, business professor at Hansung University.

Lee is not the only chaebol heir seeking to connect with younger Koreans.

"Chaebols in the past had less of a chance to communicate with the public due to bad preconceptions of them, and now seems to be the moment when chaebols happen to be breaking away from their collectively tarnished reputations," said Lim Myung-ho, a psychology professor of Dankook University. 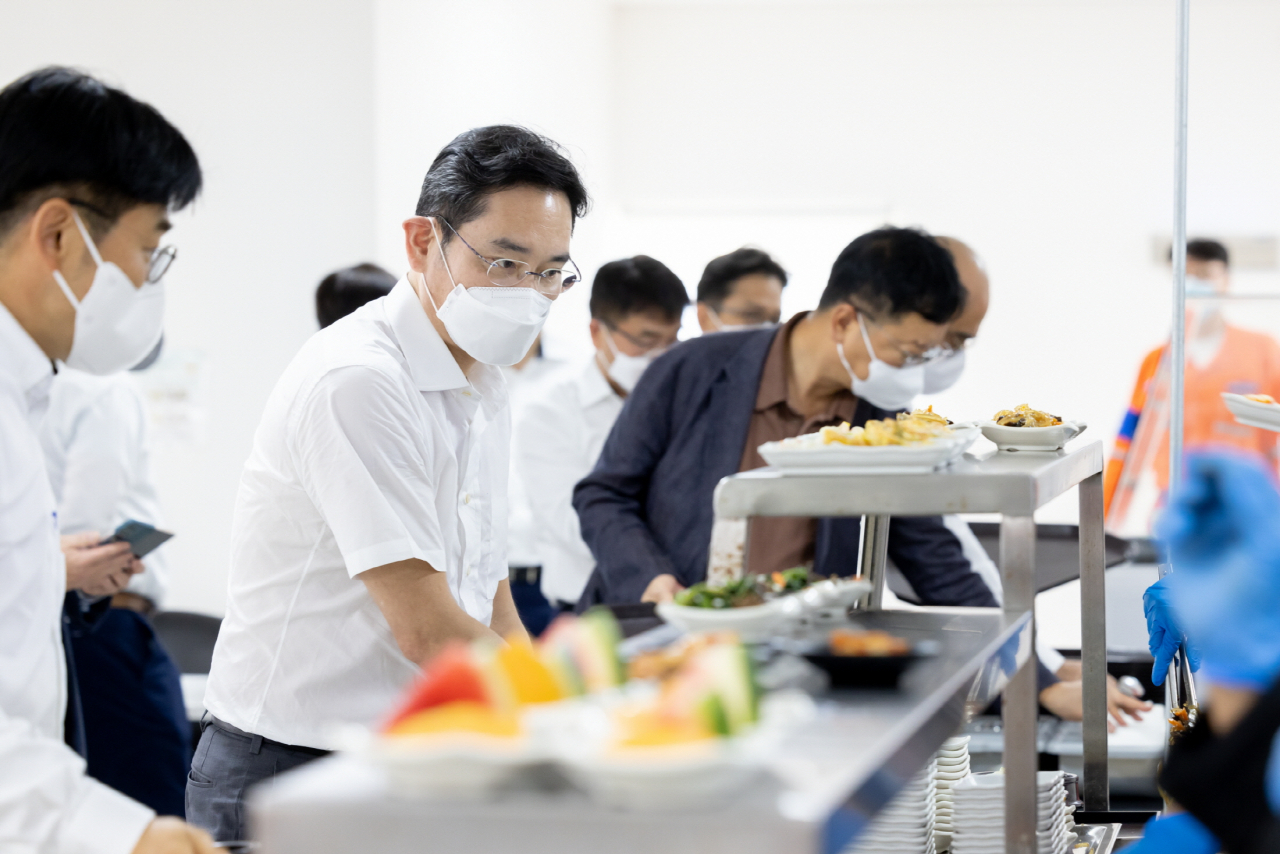 Samsung Electronics Vice Chairman Lee Jae-yong (second from left) is seen picking up food at a cafeteria in Dos Bocas Harbor, where Samsung Engineering's refinery plant construction site is located, during his visit to Mexico on Sept. 10. (Samsung Electronics)

Price to pay for being born with a silver spoon

Third- or fourth-generation heirs who assume ownership of a chaebol have often been slammed for taking their inherited privilege for granted.

When chaebol families first came to power in the 1960s, the public largely acknowledged that they helped foster the growth of the national economy. Young chaebol heirs were often faced with people doubting whether they deserved their positions.

Lee was once one such figure, and has paid a hefty cost for his trials and errors. Lee has long been haunted by the collapse in the value of tech venture companies he controlled in the early 2000s in the wake of the "dot-com bubble."

Under the so-called e-Samsung project, Lee in 2000 was tasked with managing more than a dozen fledgling tech companies including e-Samsung. He was responsible for starting their business with Samsung Group affiliates, only to have incurred losses in a year of operation that Samsung affiliates including Samsung SDS had to shoulder by overpaying for the companies' shares owned by Lee. Samsung officials involved in the activities were accused of a breach of trust but were not indicted.

Following a series of controversies, twists and turns surrounding the path to inheritance from his father, Lee extended an apology to the public in 2020. He pledged to put an end to dynastic rule at Samsung by not passing the tech giant on to his children.

This came amid a strenuous legal battle over Samsung's financial support of former President Park Geun-hye's close confidante’s equestrian daughter. In January 2021, this resulted in Lee's bribery conviction. Lee was released from prison in August the same year, but was restricted from reentering the Samsung boardroom. A year later, the restriction was lifted following a presidential pardon by incumbent President Yoon Suk-yeol.

"Lee has suffered a series of ordeals, and that seems to be what makes him self-effacing," said Kang Hye-ryun, professor of business administration at Ewha Womans University.

"Although Lee is to succeed the nation's leading conglomerate, he does not show off and keeps a low profile with a sense of humility, out of respect for what the public has been critical about.” 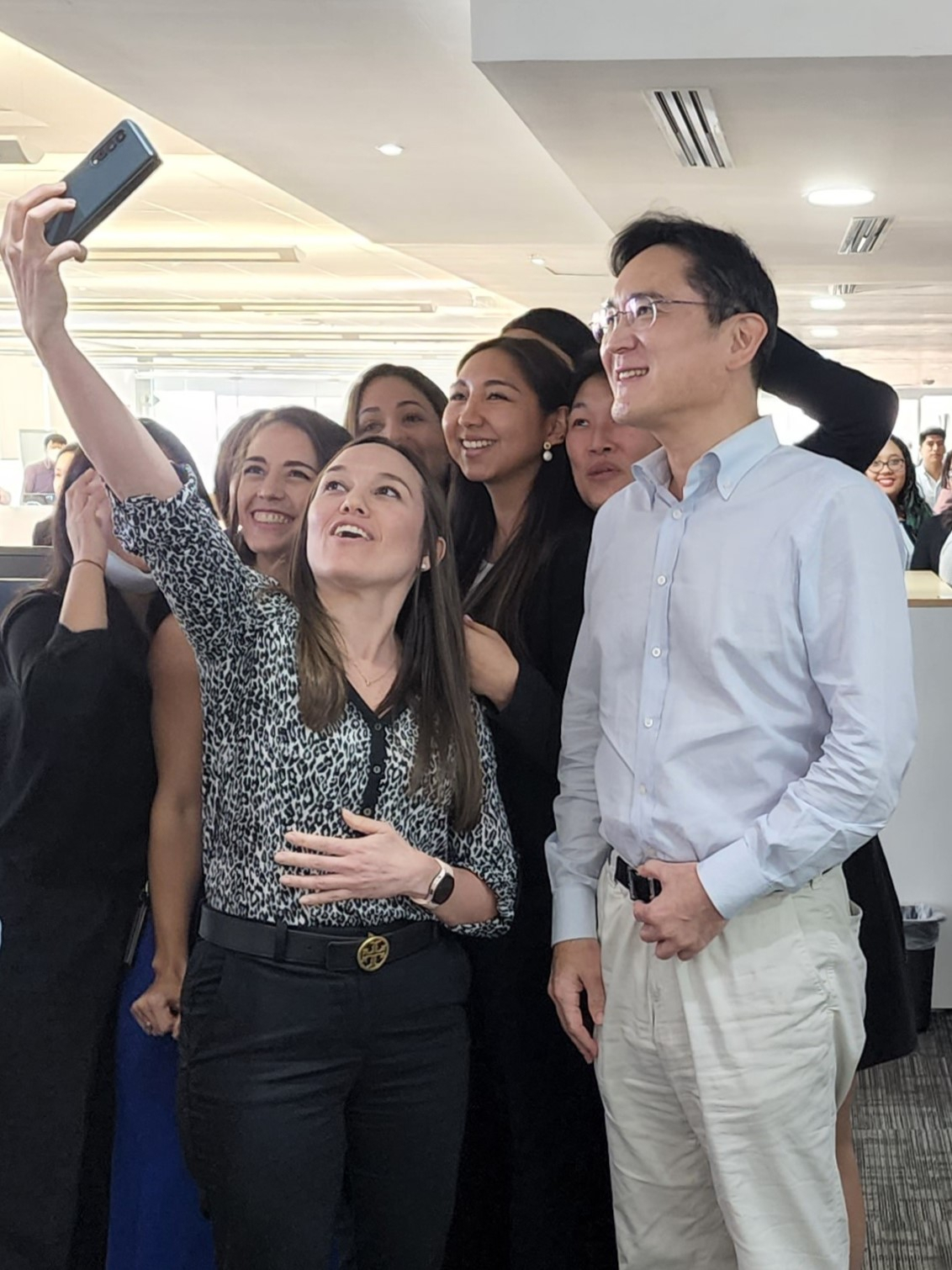 Regardless of whether the making of Lee's public image was part of an intentional strategy, the company already appears to be taking advantage of his growing fandom as he seeks to return to the boardroom, two years after his father's death.

Lee's public appearance in major Samsung locations at home and abroad -- including at chip plants, construction sites and offices -- have become more frequent, raising speculations that he might soon be promoted to chairman as early as November, in time for Samsung Electronics' 53rd anniversary.

These publicity stunts can offset the former image of chaebol, once considered a hotbed of corruption and unfair business practices, among other scandals. Lee was not immune to these past controversies, but members of the public – especially the younger ones -- are now more likely to sympathize with the powerful figure with a soft personality.

"Not many young people in Korea are aware of Lee's past projects like e-Samsung. That was when Lee was rather a hermit-like figure," Kwon of Hansung University noted.

"The public's affinity with Lee does not mean the public has already forgiven Lee's failures in the past. Tolerance will come when Lee sets up a new blueprint based on his recognition of his past trials and errors."

Although Lee's fresh public image indicates a decent start to the succession plan, this should not be where it ends, another expert noted.

"It is crucial for Lee's down-to-earth discussions with employees to trigger a change in corporate culture, so that open communication in the workplace can be normalized,” said Oh Il-seon, director of the Korea CXO Institute.

"Samsung puts openness and flexibility at the forefront of its business, but there are doubts about whether the driver for corporate change is as strong as it was in the past."