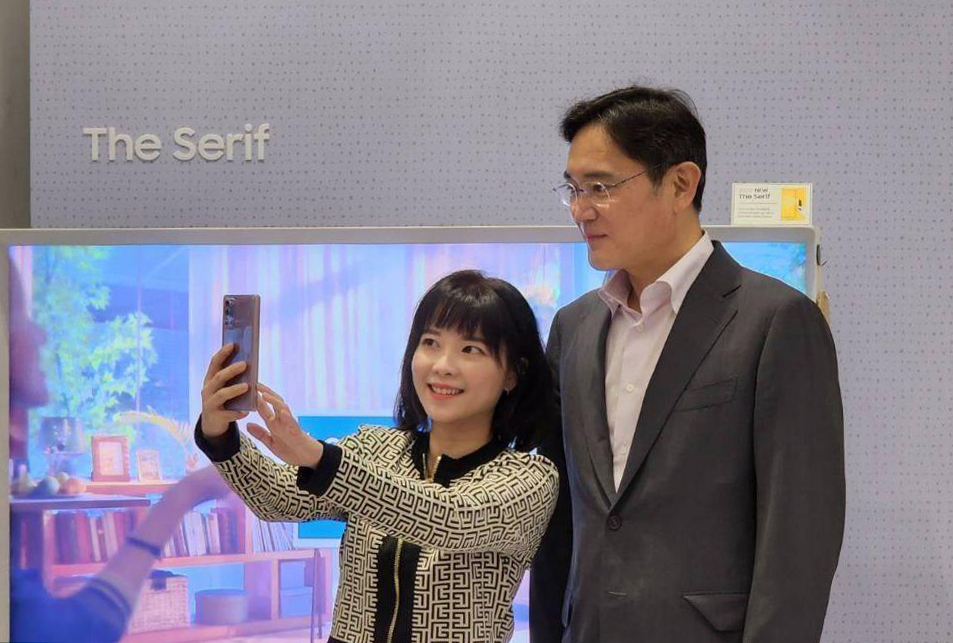 Samsung Electronics Vice Chairman Lee Jae-yong poses for a photo with an employee at a meeting with millennial and Generation Z staffers working at Samsung Digital City in Suwon on Friday. (Yonhap)
Samsung Electronics Vice Chairman Lee Jae-yong revealed that he recently went on a summer vacation with his mother for the first time in his life, local reports said Friday.

The notoriously private Samsung heir told his employees that his six-day trip with his mother involved watching a lot of TV shows. The 54-year-old added that he watched dramas she recommended and once stayed in for the entire day.

Lee was responding to questions from millennial and Generation Z staffers working at Samsung Digital City, its headquarters in Suwon, Gyeonggi Province, during a meeting Friday.

Lee’s mother, Hong Ra-hee, is the wife of Lee Kun-hee, the late Samsung Group chairman who died October 2020. Hong, 77, is the former director of the Samsung Museum of Art, known as Leeum, and the Ho-Am Art Museum before she resigned from the posts in 2017.

To a question on whether his mother also nags him, Lee replied that Hong expresses her concern by telling him “to take a lot of vitamins,” and “not drink too much beer.”

During the meeting, Lee was also briefed about products the firm’s visual display team are set to launch next year.

The meeting with millennial and Gen Z employees, or roughly those born from the 1980s to 2010s, is a rare move for Lee, who usually meets with key executives of his firm for briefings. He pledged earlier in June to “build a flexible office culture that can adapt to changes.”

Lee has been seen in high-profile interactions with employees starting with an appearance at the groundbreaking ceremony for the company’s research and development center at the Giheung Campus in Yongin, Gyeonggi Province, on Aug. 19. Lee also took pictures and talked with employees during his visit to Samsung Engineering headquarters in eastern Seoul on Wednesday, according to social media posts of those who attended the event.