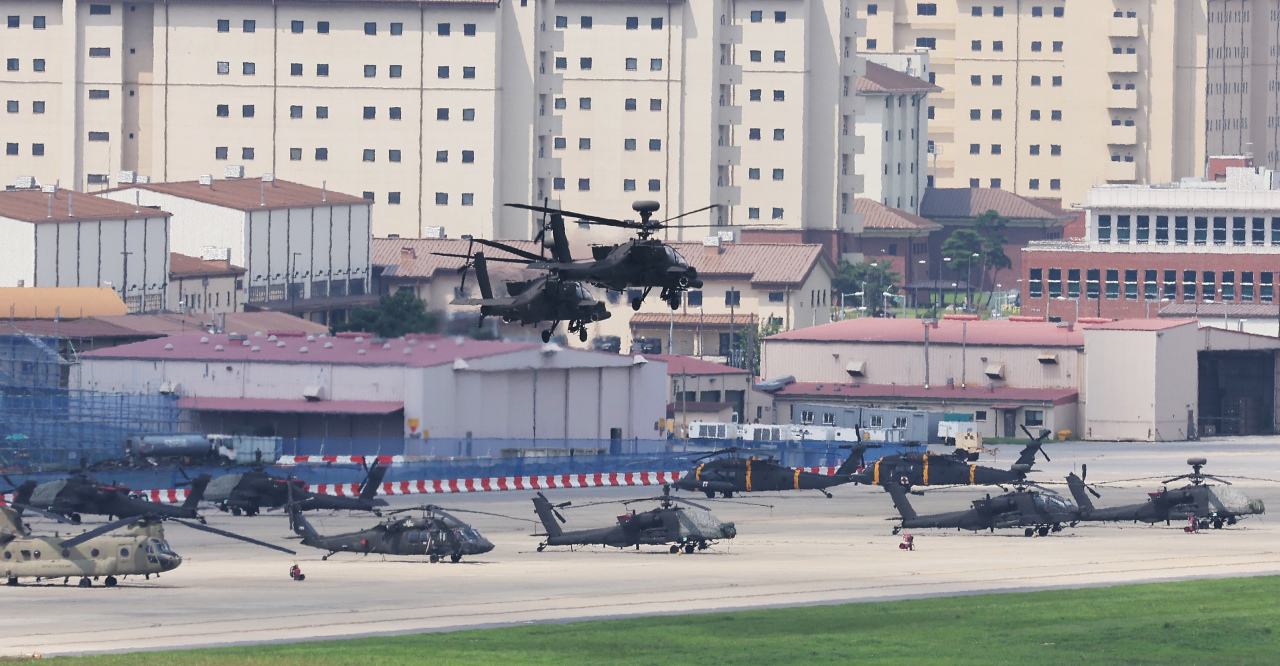 Apache attack helicopters fly at U.S. Army base Camp Humphreys in Pyeongtaek, 65 km south of Seoul, on Aug. 22, 2022, as South Korean and U.S. troops kicked off the Ulchi Freedom Shield exercise, their annual combined training involving field maneuvers set to run from Aug. 22 through Sept. 1. (Yonhap)
South Korea on Monday concurrently began conducting a major combined military exercise with the United States and civil defense drills based on real-world scenarios to prepare for full-scale war on the peninsula and local provocations by North Korea.

The two-week Ulchi Freedom Shield exercise between South Korea and the US is scheduled to be held between Aug. 22 and Sept. 1, according to South Korea’s Joint Chiefs of Staff.

The first session of Ulchi Freedom Shield aims to simulate entering into a state of war, repelling North Korean attacks and defending the Seoul metropolitan area. The second part seeks to practice counteroffensive operations, which attack the enemy’s weak points such as the side and rear of main forces, to secure the safety of the capital.

The South Korean and US forces plan to conduct 13 types of tactical-level and practical field training exercises, or FTXs, during Ulchi Freedom Shield to enhance interoperability. The FTXs include brigade-level training involving a high-tech combat simulation system and battalion-level training for weapons of mass destruction elimination operations.

The South Korean and US militaries seek to enhance combined operational capabilities and maximize the results of the FTXs by reinforcing the linkage between annual large-scale combined exercises and FTXs.

The combined military exercises are notably staged based on real-world scenarios, which reflect changing patterns of war that have emerged during the war in Ukraine such as drone attacks and cyberwarfare.

South Korea and the US also plan to conduct an assessment of the South Korean military’s Full Operational Capability during the Ulchi Freedom Shield exercise. The FOC assessment is the second part of the three-phase system required to transfer wartime operational control to South Korea.

This year’s Ulchi drills are set to be conducted from Monday to Thursday with the participation of around 4,000 government and civil organizations and 480,000 personnel.

Speaking at a Cabinet meeting, South Korean President Yoon Suk-yeol said Monday that the government has revived large-scale Ulchi drills that had been scaled back for the last five years.

“Ulchi drills would serve as a starting point for the government to newly build emergency preparedness corresponding to changes in war patterns,” Yoon said.

“Only exercises that are identical to an actual battle can firmly defend the lives of our people and the security of our nation. Our watertight security posture must serve as the basis to maintain peace on the Korean Peninsula.” 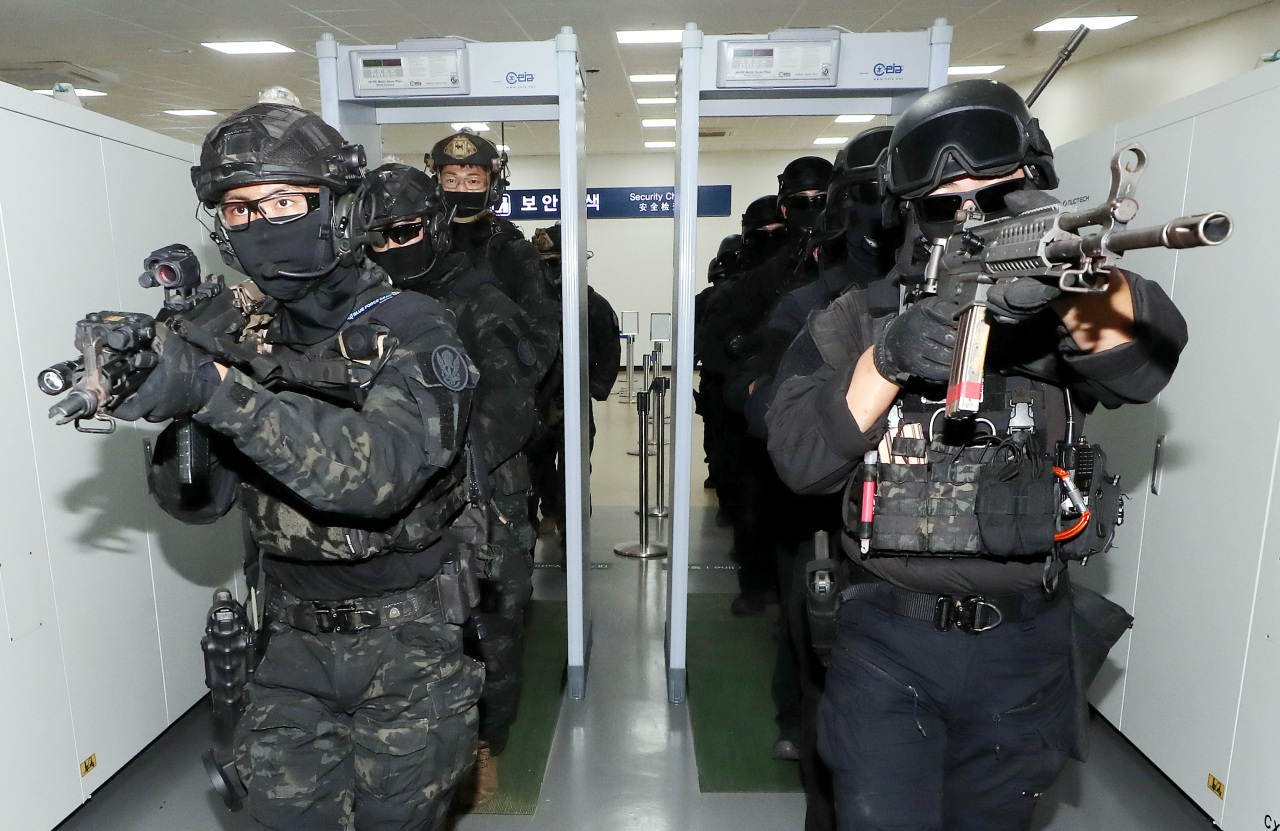 Soldiers simulate an operation to rescue hostages from terrorists as they take part in an anti-terror drill at a cruise terminal in the port city of Incheon, west of Seoul, on Aug. 22, 2022. (Yonhap)
Real-world scenarios
Yoon emphasized that South Korea should be prepared for real-life scenarios such as “cyberattacks on national key information and communication technologies facilities.”

Yoon also pointed out that South Korea should get ready for a situation in which an enemy “attempts to deal a blow to and neutralize South Korea’s warfighting capabilities.”

During the Ulchi drills, South Korea also practices intergovernmental procedures on emergency reconstruction and recovery to prepare for North Korea’s attacks on electrical, telecommunications and water infrastructure and other facilities, South Korea’s Ministry of the Interior and Safety said Sunday. The scenarios are covered in light of “threats posed by North Korea’s recent missile launches and pattern of terrorism.”

Training to combat cyberterrorism and the jamming of GPS and emergency evacuation training in case of artillery attacks are also staged during the Ulchi drills.

The JCS also underscored that this year’s integration of the civil defense drills and combined military exercise will enable South Korea to “master procedures to manage crises at the government-level and to support combined operations in the South Korea-US combined defense system.”

N. Korea’s response
North Korea has denounced the combined military exercises as a “rehearsal for a war of invasion against the country” and used the exercises as a pretext to heighten tensions on the Korean Peninsula.

South Korean Defense Minister Lee Jong-sup earlier this month repeatedly warned of the possibility of “North Korea making provocations” on the occasion of the military exercises.

North Korea fired two suspected cruise missiles from South Pyongan Province toward the western sea on Aug. 11, a day after South Korea and the US began four-day preliminary military drills in the run-up to Ulchi Freedom Shield.

North Korea’s Uriminzokkiri, an external-oriented propaganda outlet, underscored that “peace and war frenzy can never coexist” in a commentary issued Sunday, lashing out at the Yoon government’s recent move to enhance the alliance’s readiness against North Korean threats.

“No one can deny that the rattling of the US and its puppet South Korea that they harbor no hostility towards us is nothing more than puns full of lies and hypocrisy,” the commentary said.