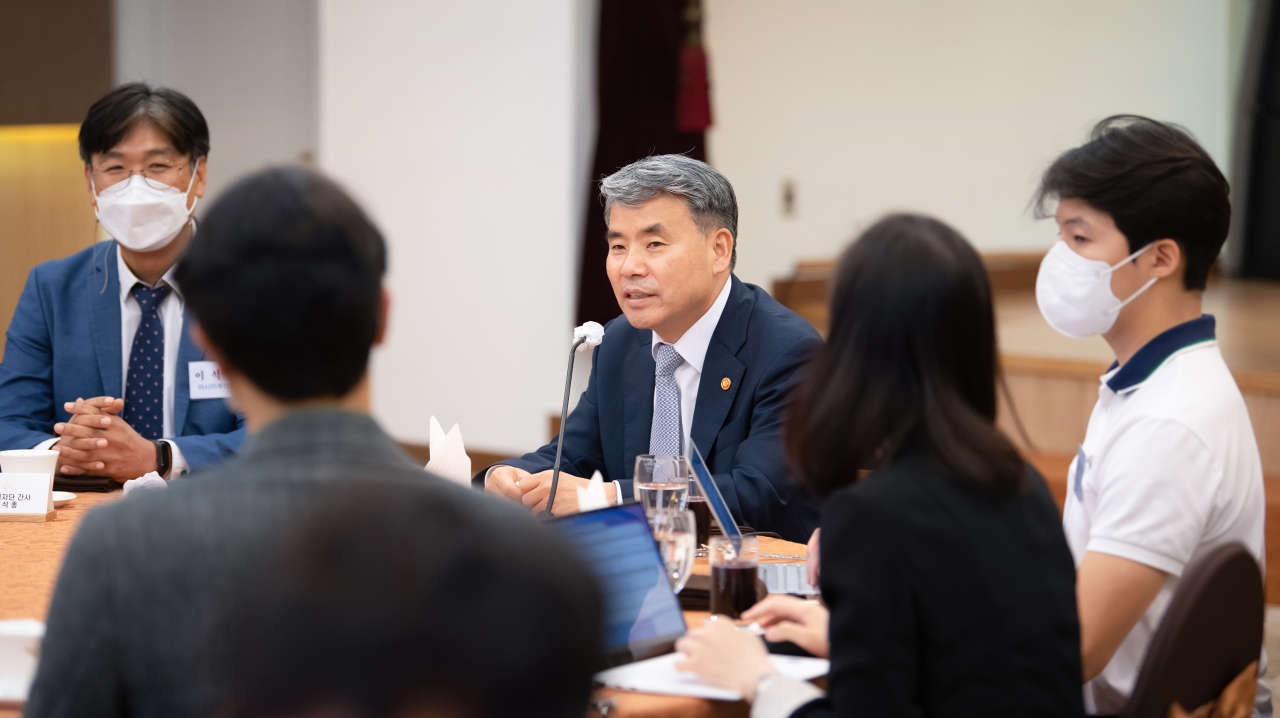 South Korea's Defense Minister Lee Jong-sup speaks at a news conference on Thursday. (Ministry of National Defense)
The South Korean defense minister said Thursday that he braced for the possibility of North Korea conducting local provocations for the foreseeable future, assessing that North Korea has sought to make a pretext of provocations.

Defense Minister Lee Jong-sup provided an affirmative response when asked if the statement by Kim Yo-jong, North Korean leader Kim Jong-un’s powerful sister, could be a foreshadowing of “imminent local provocations” during his first news conference.

Kim, who serves as a member of the State Affairs Commission in charge of inter-Korean and foreign relations, also blamed South Korea for spreading coronavirus through anti-North Korean propaganda leaflets flown across the inter-Korean border.

The South Korean defense minister assessed that North Korea “has moved to make up an excuse for making provocations,” adding that Kim Yo-jong’s statement has increased the likelihood of military provocation in that context.

“But our clear position is that the military will strongly respond to direct and tactical provocations (by North Korea),” Lee told reporters. “In case of strategic provocations, we have plans to counteract by employing the South Korean military’s independent capabilities and operating US strategic assets.”

But Lee underlined that the South Korean military will strive to reduce the risks of local provocations escalating into a military conflict.

The defense chief said the chances of conflict escalation will be slim as long as the South Korean military has sufficient capabilities to deal with North Korea’s local provocations and South Korea and the US firmly maintain a combined defense posture against North Korea’s nuclear and missile threats.

Lee also explained that North Korea has a track record of calibrating the timing of provocations to coincide with the South Korea-US combined military exercises. Pyongyang’s intent is to find an excuse and shift the blame to South Korea and the US.

But Lee declined to provide a direct answer when asked if he had detected any peculiar signs of North Korea’s potential provocations.

In that case, Lee said, South Korea will have no grounds for adhering to the military agreement that was signed in 2018 on the occasion of the inter-Korean summit to implement the Panmunjom Declaration. The agreement has served as a central instrument to prevent accidental clashes between Seoul and Pyongyang.

“The Sept. 19 military agreement is meaningful and will be maintained only when two Koreas comply together,” Lee said. “But if our side unilaterally abides by the agreement, the agreement will lose meaning and it will not last long.”

But Lee was reserved when asked if Seoul seeks to scrap the inter-Korean military agreement in case of North Korea’s seventh nuclear test. Lee said inter-agency consultation is necessary to make a decision.

South Korea and the US will take “tougher countermeasures in close coordination” should North Korea conduct a nuclear test.

Lee elucidated that the joint counteraction mainly aims to deter North Korea’s use of nuclear weapons by demonstrating the disadvantages and uselessness of possessing nuclear weapons as a means to achieve its goal.