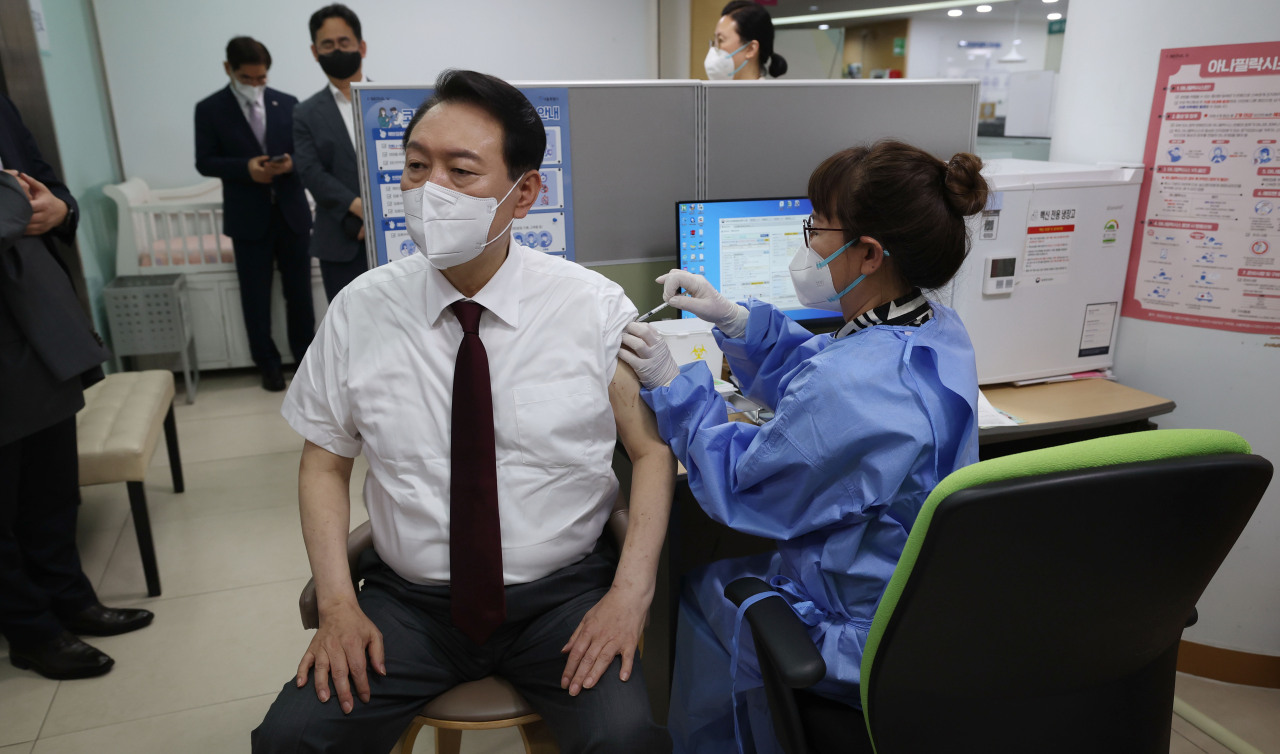 President Yoon Suk-yeol receives his second booster vaccination on July 13 at a public health clinic in Jung-gu, central Seoul. (Yonhap)
This spring, South Korea saw one of the highest case rates of the original COVID-19 variant omicron BA.1 and its “sibling” BA.2 in the world. Now the country is distributing a second round of boosters to fight the most recently dominant BA.5, another omicron subvariant.

The initial omicron surge that lasted from late January through April led to about 16 million cases here, peaking at a one-day high of 621,147 cases on March 17, according to the Korea Disease Control and Prevention Agency’s statistics.

At the time, only about 3 percent of people in their 60s and above remained unvaccinated, with most cases being “breakthrough infections,” meaning infection after full vaccination.

At the height of the BA.1-BA.2 wave from Feb. 27 to March 26, 7,179,059 people aged 12 and older -- the cutoff age for vaccination eligibility then -- were confirmed with an infection. Some 60 percent of them had been vaccinated with a third dose and 32 percent had completed their primary vaccine series.

The widespread presence of relatively recent omicron breakthrough infections in the population raises the question of whether a fourth dose of a vaccine based on the original Wuhan strain is justified, and if so, for whom.

The spread of BA.5 in South Korea seems to be sparing people with prior immunity, at least based on the KCDA’s early analysis.

The KDCA said 97 percent of infections that occurred in the first week of July were in people with no documented infection history, with the other 3 percent being reinfections. Similarly, in the second week of July, people who have never been infected before made up 96 percent of new infections.

As South Korea began distributing fourth doses in April, the KDCA said older adults were “recommended” to get boosted for the second time.

The recommendation has since subtly shifted to “it depends.”

According to the KDCA guidelines issued on July 28, boosters are optional for people who have been breakthrough-infected regardless of their age and risk profile. Anyone 50 and older are eligible to get a fourth dose, but only “if desired.”

In a phone call with The Korea Herald on Sunday, Kwon Geun-young, the director of KDCA’s vaccination management division, said that “the context has changed with fourth doses.”

“Unlike last year when we were distributing the first two doses and boosters, a lot more people have come down with an infection,” he said. “The basic premise of our second booster strategy is that it’s mainly for people who have never had COVID-19.”

Kwon said this was because infection, especially infection after full vaccination, was known to provide some protection.

“There is evidence that getting a second dose and finishing your primary series is helpful, even after infection. Whereas with a third or fourth dose, the evidence isn’t as clear that the additional vaccination would lead to a higher immunity in people who have had a breakthrough infection,” he explained.

He said the July 28 guidelines were based on deliberations by the national advisory committee on immunization.

And yet people who are at least 50 years old are still alerted to make their fourth dose appointments if their positive test was three months or longer ago.

The KDCA’s text alert does not clearly state the changed recommendations for people with past infections.

The alert, which is sent automatically to eligible people, reads: “As 120 days have passed from your third dose, you are due to receive your fourth dose.”

Some health care workers delivering vaccinations report they were not informed about the update. A primary care physician whose office is in Seoul said that he “wasn’t familiar with the differing recommendations based on infection history.”

On the confusion and mixed signals, Kwon said the KCDA “plans on working with municipalities to communicate the recommendation status better to the public.” 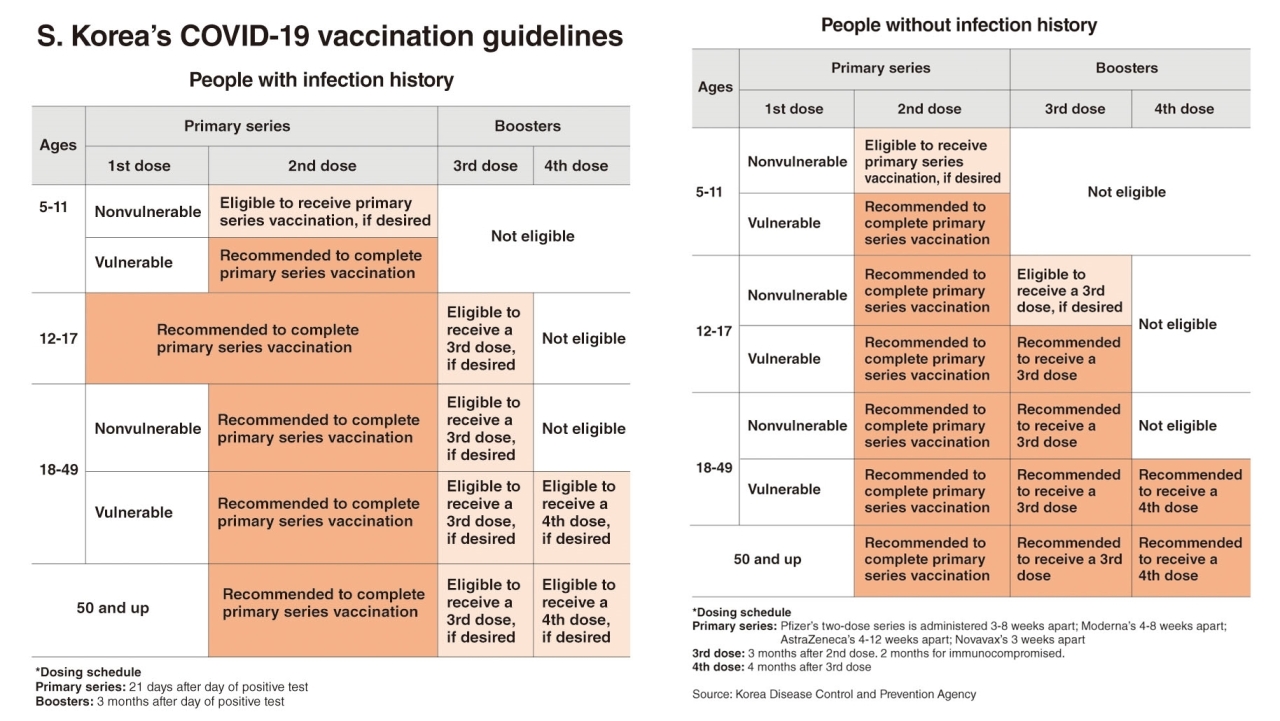 How beneficial would a fourth dose of the original Wuhan vaccine be against BA.5 for people who were breakthrough-infected with BA.1 or BA.2?

The KDCA said in reponse to The Korea Herald’s question on July 26 that no analysis has been carried out on that front yet.

Park Young-joon, the head of the KDCA’s epidemiological investigation team, said that an analysis of data from Feb. 16-April 30 showed fourth doses were about 50 percent effective in preventing severe outcomes for a sustained period of time.

Dr. Oh Ju-hwan, a public health policy professor at Seoul National University, said the changing cost-benefit assessment of the vaccine should be reflected in policy responses.

“If potential risks of vaccination remain the same, while the benefits that can be gained from vaccination are reduced as a result of a new variant becoming dominant, that would result in some changes in the cost-to-benefit ratio,” he said.

Oh pointed out South Korea has been “relying mostly on vaccination” to cope with its omicron phase of the pandemic.

“We are taking the same approach with BA.5 that we had taken with BA.1 and 2, based on the assumption that similar results could be replicated,” he said.

“There need to be efforts for adopting other interventions such as contact tracing that can complement the existing vaccines’ imperfect protection.”

He said that at the moment, the data weren’t robust enough to be able to derive a meaningful cost-benefit analysis. “For instance, we still don’t have enough understanding about the lingering impacts of COVID-19, or long COVID.”

Some concerns have also been raised about repetitive vaccination over a short span of time. In January, the European Medicines Agency had warned that frequent boosters could adversely affect immune response.

The short answer from Dr. Jerome Kim, the director-general of the International Vaccine Institute, is yes. “As Dr. Fauci (director of the US National Institute of Allergy and Infectious Diseases) said, ‘a live virus’ booster,” he said.

In an e-mail exchange with The Korea Herald, he said that getting infected with BA.1 and BA.2 “appears to confer some, incomplete protection against BA.4/BA.5 infection and mild disease.” Hybrid immunity “confers protection against severe disease, hospitalization and death.”

But neither would protect against the next infection.

“Prior vaccination plus BA.1 infection would not protect you from getting BA.5, although it would protect against the worst manifestations of BA.5 -- that is, disease and death -- at least over the short term,” he said.

That comes with several caveats, he added. The data suggesting cross-variant protection are primarily preprints and not yet fully reviewed, for one thing. The durability of that protection was not yet known, either. Then there were BA.2.75 and other worrying subvariants that bear watching.


To boost or not to boost

Given the number of people in South Korea who were boosted and were infected by omicron between January to March, the timing for boosting was right to prevent BA.5 from reinfecting “hybrid-immune” or previously vaccinated and then BA.1-infected people, the International Vaccine Institute chief said.

The remaining 60 percent of South Koreans who haven’t had a known infection also remained vulnerable. As of Tuesday, more than 20 million out of 51 million people here have had COVID-19 at least once over the course of the pandemic.

So who should be getting their fourth vaccination?

“If you are over 50 and or have underlying conditions, my opinion is yes, get boosted now,” Kim said. While there are new vaccines on the way, as the rollout is often not instantaneous, it is hard to know when they will be available in South Korea, he explained.

“At least based on what the FDA told Moderna and Pfizer, (the FDA) wants a Wuhan-BA.5 bivalent, not a Wuhan/BA.1. The doses of the latter had started manufacturing, but given the FDA’s position, the companies are getting the Wuhan/BA.5 ready. This will be available late in the year,” he said.

Health officials have vowed that omicron-adapted vaccines will reach South Korea over the remaining year. But out of the two updated vaccines in the pipeline – with one more up-to-date than the other -- it was uncertain which one the country will be getting.

“We’re trying to bring in both the BA.1 vaccine and the vaccine against BA.4 and BA.5. As of now we’re still discussing which vaccine would be the one we’ll be administering,” a senior KDCA official said in response to The Korea Herald’s question on Tuesday.


What happens with next variants?

BA.5 probably won’t be the dominant strain at the end of the year, but vaccines would still retain some levels of protection, said Kim of the International Vaccine Institute.

“We are relying on cross-protective immune responses. The original Wuhan-based vaccines have worked in alpha, beta, gamma, delta and omicron -- BA.1, BA.2, BA.4 and BA.5 -- to reduce hospitalizations and death through cross-protective responses,” he said.

That would likely be the case with future variants of concern as well.

“Given what we’ve seen regarding viral evolution so far, a bivalent Wuhan/BA.5 would give some level of cross protection against new isolates,” he said.

Kim said the two-component vaccine would be better than the existing monovalent Wuhan vaccine.

“If we look at the levels of inactivating or neutralizing antibodies against BA.5, the bivalent vaccine works better than the Wuhan one alone,” he said. “Whatever the next dominant strain -- whether it be pi or another subvariant of omicron -- it will likely be cross-neutralizable by the bivalent Wuhan/BA.5. So it will do well to prevent serious disease and death.”

According to Dr. Paik Soon-young, an emeritus professor of microbiology at Catholic University of Korea, natural infection with the virus in theory would offer a “more holistic immunity” than an artificial one.

“The vaccines elicit immune responses specific to the surface protein of the virus that is susceptible to mutations. Natural infection, on the other hand, prompts immune responses against other proteins where mutations seldom occur,” Paik said. “So hybrid immunity can be thought to be more resistant to variants.”