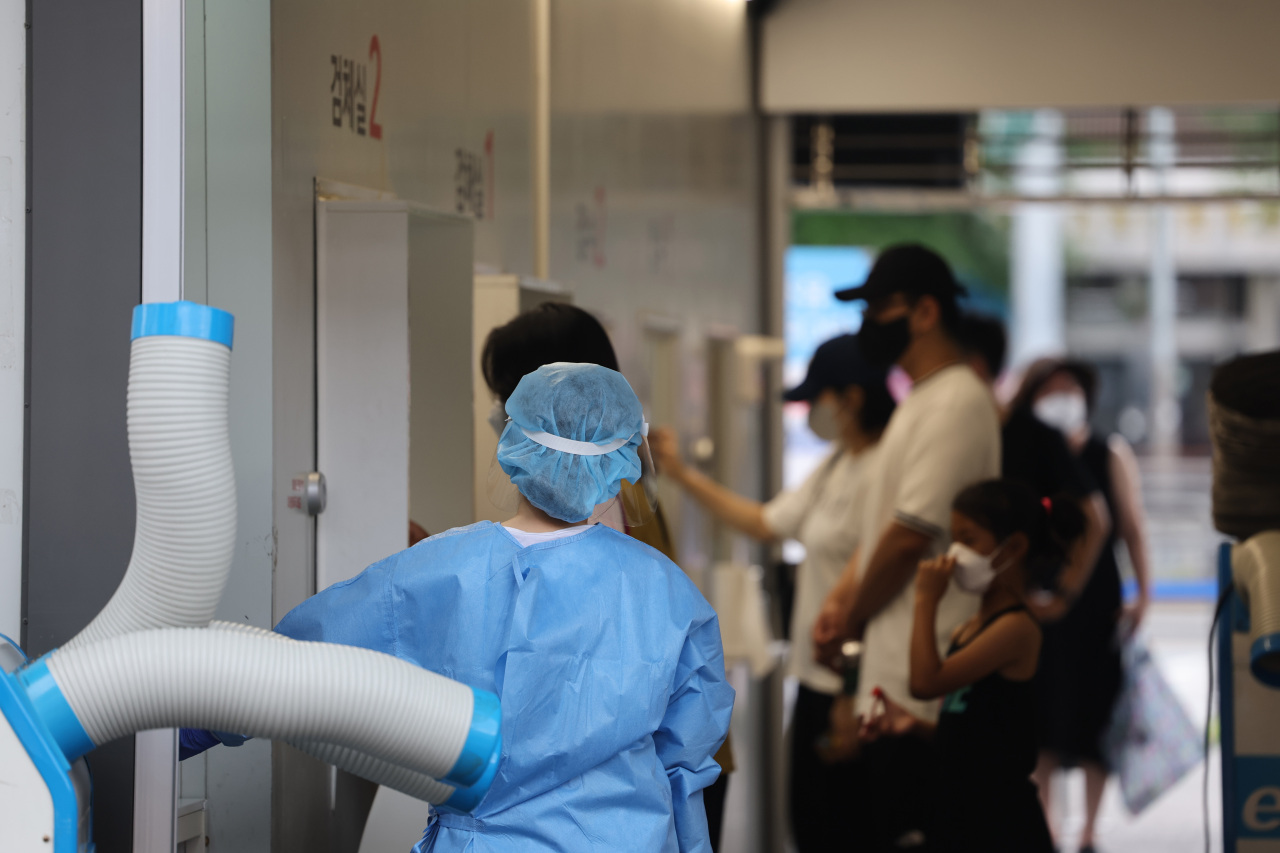 People wait to take COVID-19 tests at a testing site in Seocho, southern Seoul, on Sunday. (Yonhap)
South Korea is sticking to its monthslong “omicron response strategy” of barring most people from access to PCR testing, which experts warn could risk highly evasive subvariants such as BA.5 spreading untracked.

Since late January, PCR tests, considered the gold standard in COVID-19 diagnosis, have been offered only to people aged 60 and older. Residents and workers of nursing homes and congregate settings can get PCR tests as a part of regular screening.

Anyone who falls outside of these categories must present a positive result in an at-home rapid test or have “epidemiological ties” to a confirmed patient.

Otherwise, noneligible people are being charged about 50,000 won ($38) to take a PCR test, even if they have come into close contact with a patient in some circumstances. As contact tracing was ceased in February, proving exposure has become difficult.

The heavy reliance on rapid antigen tests for the majority of population will likely undermine the country’s ability to monitor COVID-19, according to Dr. Sung Heung-sup, a laboratory medicine professor at Asan Medical Center.

“RATs work best in people with symptoms, preferably at least a few days after exposure. But people are taking RATs regardless of their symptoms or point of exposure,” said Sung, speaking with The Korea Herald on Sunday.

“RATs aren’t designed to work on people with no symptoms. We’re doing it the wrong way,” he said.

Dr. Kim Woo-joo, an infectious disease professor of Korea University, pointed out that people in their 20s and 30s were accounting for more than a third of newly announced cases this month despite their limited access to testing.

“Younger adults have been testing positive for COVID-19 more than any other age group,” he told The Korea Herald. “As they are more likely to experience minimal or no symptoms, a lot more are probably not being picked up by the less sensitive RATs.”

Another problem with limited PCR testing is the exclusion of RAT-positive people in genomic sequencing, said Dr. Paik Soon-young, an emeritus professor of microbiology at Catholic University of Korea.

“With PCR tests, samples are delivered to labs, a small proportion of which are then sequenced for variant monitoring,” he said. “That’s not the case with at-home tests. The swabs are discarded right away.”

Paik said the country’s variant analysis “can only be based on samples from people 60 and older, and some travelers, although it’s the younger people who are driving the new infection rates.”

He slammed the “overall lack of transparency” in the Korea Disease Control and Prevention Agency’s data.

The KDCA stopped publishing test positivity rates starting March, as rapid tests were deployed to diagnose patients. The positive PCR and rapid tests are not counted separately in the tallies. The number of samples being sequenced each week is not disclosed either.

The existing PCR tests have been rendered less reliable by the new Ministry of Food and Drug Safety guidance, according to Dr. Hong Kiho, a laboratory medicine professor at Severance Hospital. Last week, the ministry OKed PCR tests targeting just a single gene, “which hurts their reliability as diagnostic tools,” he said in a phone call with The Korea Herald.

“Prior to this change PCR assays in the country were required to target at least two SARS CoV-2 genes,” he said. “Depending on which gene is mutated, the presence of a certain variant may not be identified in a PCR test. So naturally it makes sense to have tests with more targets.”

The ministry’s decision was “ill-timed, to say the least, as new variants continue to emerge,” and “one that greatly compromises our ability to keep track of not only omicron’s subvariants, but also possibly the next Greek alphabet variant of concern,” he said.

Although the ministry has explained that single-target tests do not deviate from the international standard, Hong said that was based on an outdated World Health Organization guidance issued in the early days of COVID-19 when variants had yet to appear.

Contrary to South Korea’s move, the US Food and Drug Administration said in a July 14 statement that tests with multiple targets were less likely to fail in detecting new variants than tests with single targets, he pointed out.

For the past seven days up to Sunday midnight an average of 64,283 cases and 18 deaths were announced here, which compares with 13,216 cases and six deaths seen in the first week of July, according to the KDCA situation report.

The latest available statistics showed that about 126,800 PCR tests were carried out a day in the third week of July, far below the touted daily capacity of 850,000. Only eight public testing sites were currently running across the country, with the KDCA vowing to add 60 more.