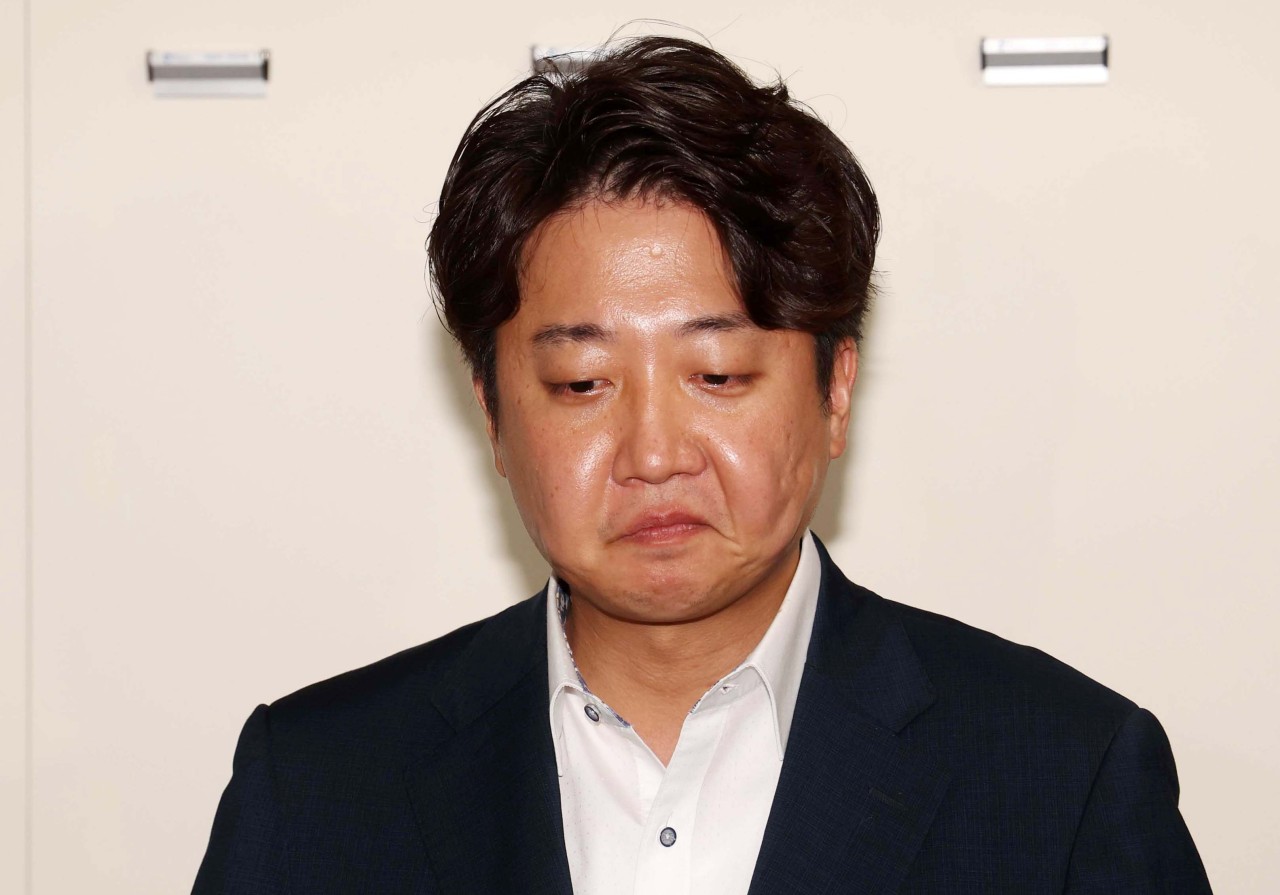 Lee Jun-seok is suspended from serving as People Power Party leader until January next year. (Yonhap)
A leaked text message conversation between President Yoon Suk-yeol and the ruling People Power Party floor leader Rep. Kweon Seong-dong has laid bare what appears to be a rift with Lee Jun-seok, the party’s leader.

The text messages were caught on camera by a reporter on Tuesday while Kweon was checking his phone during an interpellation session at the National Assembly in Yeouido, Seoul.

In the short exchange that was captured in the photograph, a contact shown as “President Yoon Suk-yeol” said: “Our party is doing better. It’s different now that the party leader, who was just picking fights within his own party, has changed.”

Kweon is currently filling in as the acting chair of the ruling party while Lee is in temporary exile over a sexual bribery scandal that is still being investigated by the police.

The day after the bombshell leak on Wednesday morning, Yoon dodged reporter questions, breaking away from his usual ritual of talking to reporters at the presidential office lobby on his way to work.

Speaking to reporters shortly after, Choi Young-bum, senior presidential secretary for public relations, said the buzz surrounding the text messages was a “misunderstanding.” “It’s regretful that a private conversation has been exposed, under whatever circumstances,” he added.

After staying silent for about half a day, Lee took to Facebook Wednesday morning and shared a message that appeared to be his response to the president’s text messages.

“On that island (of Yeouido), they glare and bully when the cameras are turned off. When the cameras are rolling, they smile and offer to shake hands,” he said. Lee, who is on a trip to Ulleungdo, an island county off the east coast, then said, “I like this island. Here, what you see is what you get.”

On the presidential office calling the reaction to the leak a “misunderstanding,” Lee told a news outlet that he “understand(s) exactly what the president meant in those messages.” “It’s baffling,” he was quoted as saying.

The pro-Lee faction within the party -- composed of Lee’s former colleagues at a minor conservative party and a handful of young male political rookies called the “Lee Jun-seok kids” -- came to his defense.

Yoo Seong-min, the now-defunct minor conservative party’s ex-leader whom Lee had interned for as a college freshman, Intagrammed a captionless photograph of the text message conversation on Tuesdayg. After losing the People Power Party primary for Gyeonggi governor in April, Yoo claimed he was “defeated by the Yoon” and not by the other candidate, suggesting he was not backed by the then president-elect.

Park Min-young, a 29-year-old who was picked as the People Power Party spokesperson through an audition staged by Lee, wrote in a Facebook post on Tuesday that he was “feeling unsure” about Yoon, whom he had “once trusted in.”

Friction between Lee and others in the party has been on open display over the past months.

More recently, Lee was seen being hostile to Bae Hyun-jin, the party’s supreme council member in the presence of the press. After fellow party Rep. Chang Je-won told reporters the bickering was not helping the administration and needed to stop, Lee shared the news article on his Facebook with a comment that read, “I didn’t take the bait and he (Chang) is opening fire himself.”

On the same night the ethics committee decided to suspend him, tearful Lee said he was “never congratulated for the presidential election victory.” “I was snubbed and there was no respect for me from anyone (in the party),” he said.

On several occasions Lee has publicly badmouthed Yoon, calling him “amateurish,” “clueless,” “behind the times” and “immature,” among other unflattering terms. Infamously, during an appearance on a news outlet’s YouTube segment in July last year, Lee had said: “If Yoon becomes the president, I would rather leave the earth.” At the time, Yoon was leading in the polls of preferred presidential candidates.

During the presidential race, Lee disappeared from public view from Nov. 29 to Dec. 3, in an apparent revolt against the Yoon campaign. Then on Dec. 21, he offered to step down from all campaign posts.

Yoon’s public remarks about Lee on the other hand have usually been on a positive note. He has said that the ethics committe’s decision to suspend Lee from the party was “unfortunate.”

Overnight the People Power Party’s online bulletin board was flooded with messages from supporters accusing the party leadership of “fueling an internal feud,” with some calling on both Kweon and Lee to resign.