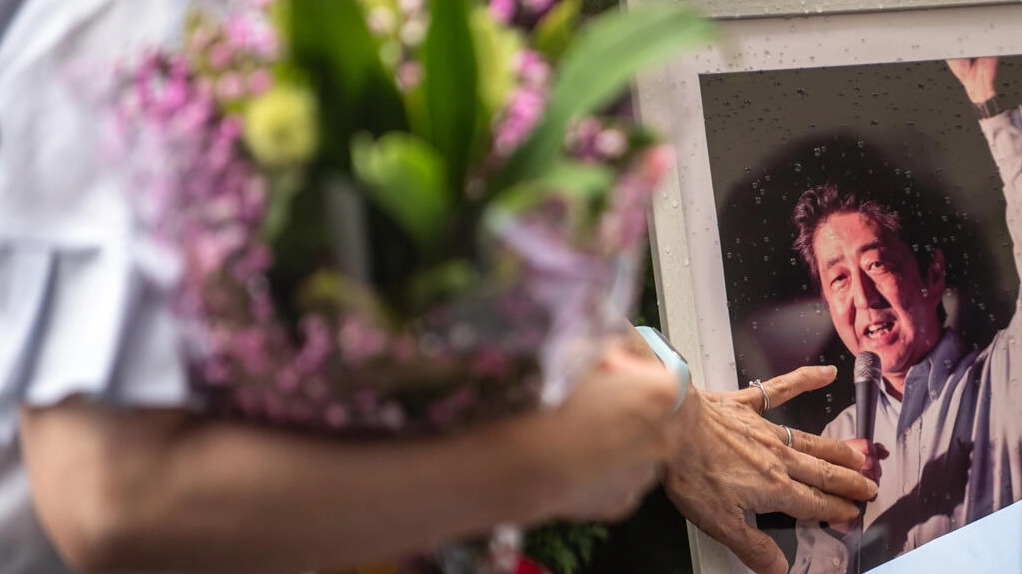 As bouquet after bouquet was placed on the table, it became a makeshift altar adorned by framed photos. (Philip FONG AFP)

NARA – A day after the assassination of former prime minister Shinzo Abe, a steady stream of mourners, many in tears, arrived at the scene of his murder in western Japan to offer flowers and prayers.

People from all walks of life formed a long line on Saturday on the otherwise ordinary street outside a train station where Abe was shot while campaigning ahead of weekend elections.

Afternoon downpours did not deter the crowds who came to offer condolences, some having traveled great distances like 51-year-old Yoshikazu Tokudome, who flew hundreds of kilometers from the Tokyo region to the city of Nara.

"I'm just in pain, and I thought the least I could do was come here and lay some flowers," the company worker told AFP.

When he heard about the death of Abe, Japan's longest-serving prime minister, "I could understand what was being said in the news, but I just couldn't accept it."

Visitors like Tokudome bowed deeply with their eyes closed, some weeping as they laid flowers on a table in a tent set up near Yamato-Saidaiji Station.

Friday's events unfolded rapidly, with Abe speaking confidently into a microphone before he was shot down and the suspect immediately tackled to the ground.

"It's just shocking and I'm so sad. I was feeling really restless at home," said Sumiko Hayashi, 50.

"I really liked him as a person, too," she said, especially "the way he looked so happy with his wife."

As bouquet after bouquet was piled onto the table, it became a makeshift altar adorned by framed photos and cartoon illustrations of a smiling Abe, who was forced to resign from office in 2020 due to poor health.

Cans of beer and other drinks were also placed on the table for the politician to enjoy in the afterlife, but the overriding mood was sombre.

Wiping away tears, 52-year-old Kayoko Ueda, from the neighboring region of Osaka, told AFP she was "distraught" and "couldn't believe something like this could actually happen in Japan."

Violent crime is very rare in the country, which also has some of the world's strictest gun laws.

The suspect has been identified as 41-year-old Tetsuya Yamagami, who footage showed approaching Abe from behind and then opening fire with an apparently handmade gun.

The killing has sparked scrutiny over whether security measures at the stump speech were sufficient, and some mourners told AFP more could have been done.

"Security was lax. It exposed, I think, how Japan was complacent in thinking everything is safe here," Ueda said.

"High-ranking officials from overseas, like prime ministers and cabinet members, often visit Japan under the assumption that this is a safe country," he said.

"But I think security should be strengthened much more in the future."

With tears in his eyes, Takahashi, who always thought highly of Abe, said that as he laid flowers, "I told him 'thank you for everything, and please rest in peace.'" (AFP)