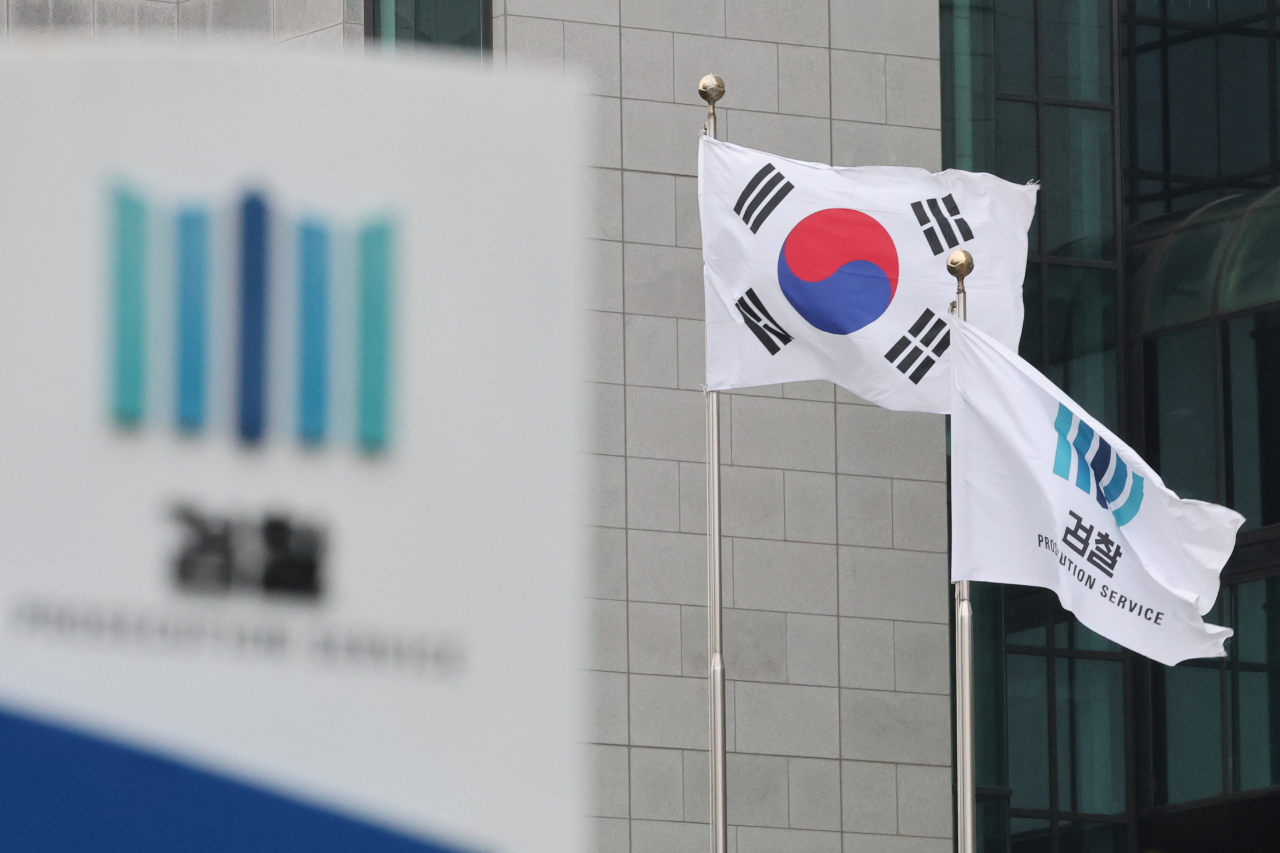 Flags flutter in the wind outside the Supreme Prosecutors’ Office in Seocho, southern Seoul. (Yonhap)
The family of Lee Dae-jun, a fisheries official killed by North Korean soldiers at sea in 2020, on Thursday called for arresting former President Moon Jae-in’s spy chief, Park Jie-won, who is already facing a criminal investigation after he was reported by the National Intelligence Service to the prosecutors.

The NIS on Wednesday filed a criminal report against Park, who served as its director for almost two years until the end of Moon’s presidency in May, alleging that he destroyed records related to Lee’s killing by North Korea.

Another former director of the NIS and Park’s immediate predecessor, Suh Hoon was reported on the same day for allegedly abusing his power to drop the investigation into the forced repatriation of two North Korean fishermen in 2019.

The lawyer working with Lee’s family, Kim Ki-yun, said in a phone call with The Korea Herald that “given the gravity of the allegations raised by the NIS,” they planned to ask prosecutors to arrest Park for investigation in a letter on Friday.

“It’s absolutely essential we find out whether the reportedly destroyed records can be restored to get to the truth about what really happened, and more importantly which records Park sought to have destroyed and why,” he said.

Kim said the family was also reporting Seo Wook, who was minister of defense, and Lee Young-chul, who oversaw the military intelligence management system as the head of the Joint Chiefs of Staff’s intelligence headquarters, to prosecutors on Friday for their possible roles in the alleged destruction of records.

The records Park is accused of having destroyed are believed to concern military intelligence.

“The NIS does not create but simply receives intelligence. Neither the service nor its director has the authority to order armed forces to get rid of records,” Park said in a radio interview Thursday morning.

“Even if I did try to delete any data it still wouldn’t be expunged completely from the main server, and all of those activities would have left tracks. There is no way I would take it upon myself to do something so foolish.”

In a Facebook statement, posted soon after the NIS announced its decision to report him Wednesday, Park denied all allegations, saying they were “fiction.” “Stop bringing politics into operations of the NIS,” he said.

The NIS said in a Wednesday message to reporters that an internal investigation in June found suspicions of wrongdoing by Park and others within the service in the handling of Lee’s case.

Lee Rae-jin, the deceased official’s older brother, told The Korea Herald that the news has left him “in shock.” “I knew my family was fighting against something big and powerful but I never imagined something of this magnitude would be involved,” he said.

The official of the Ministry of Oceans and Fisheries was fatally shot and burned by North Korean troops after going missing while on patrol duty. South Korean authorities at the time had said Lee appeared to have the intention to defect to North Korea -- a determination that was overturned by the Coast Guard recently.

The Supreme Prosecutors’ Office on Thursday morning said the public security team will be leading the investigations into Park.