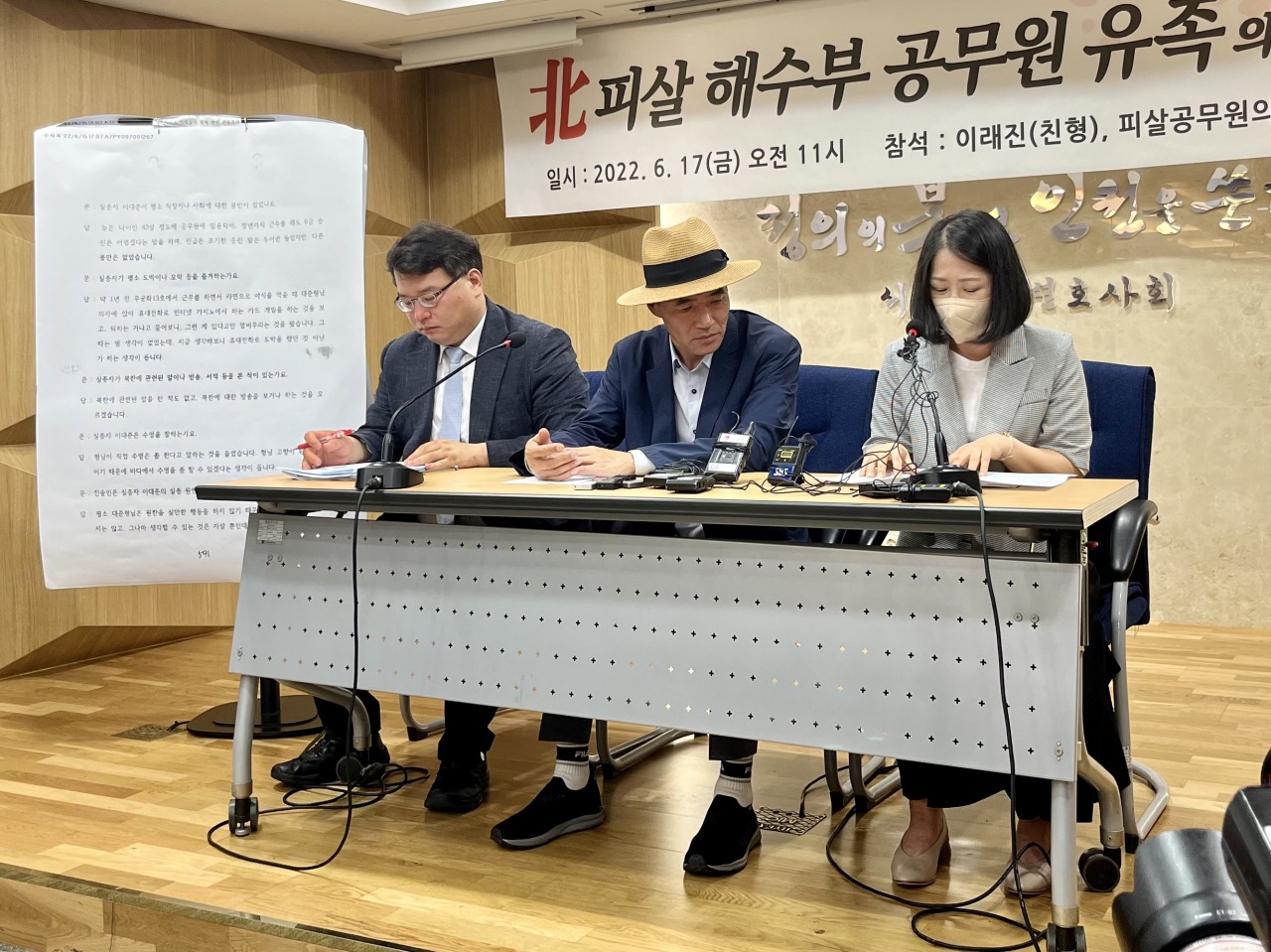 The family members of Lee Dae-jun, a South Korean fisheries official who was killed by North Korea in 2020, hold a press conference on June 17. From left, the family’s lawyer Kim Ki-yun, the official’s older brother Lee Rae-jin and his wife Kwon Young-mi. (Kim Arin/The Korea Herald)
Lawmakers of the main opposition Democratic Party of Korea are facing an inquiry over claims that they tried to cajole the bereaved family of Lee Dae-jun -- a fisheries official who was fatally shot by North Korean troops at sea in 2020 -- into admitting that he had attempted to defect to North Korea.

The National Human Rights Commission of Korea confirmed to The Korea Herald that it began an inquiry into the claims after a receiving a petition from a civic group last week.

The inquiry from the human rights watchdog comes months after Lee’s family came forward with the claims earlier this year.

During an April 19 interview with The Korea Herald, the deceased official’s older brother Lee Rae-jin claimed that back in September 2020, three Democratic Party lawmakers and then-Minister of Patriots and Veterans Affairs had pushed for him to accept that his younger brother had tried to defect to North Korea.

“From day one I was vocal about how impossible and improbable it was that my brother would defect to North Korea. Then they came to my office in Ansan with that suggestion right after I had my first conference with the foreign press,” he said.

“I of course rejected. They didn’t even have any evidence (that he defected). I told them that I want to know the truth, that I want to expose the truth and restore my brother’s honor.”

Lee asked not to publish their names at the time of the interview.

Another family member, the official’s widow Kwon Young-mi, told The Korea Herald on Monday that she remembers the phone conversation she had with her brother-in-law about the meeting.

“He called me and told me about what they said, and I remember telling him that he should not accept any offers,” she said. “I thought it was inconsiderate, preposterous and brazen of the lawmakers to approach the family like that.”

The claims resurfaced following Lee’s Facebook post on June 29 where he revealed the discussions that took place during the meeting with four Democratic Party figures.

In a phone call with The Korea Herald on Sunday, one of the lawmakers who met with Lee, Rep. Kim Young-ho, once again denied the claims, saying he has “very different memories of what went down that day.”

“We got an incredibly hospitable reception (from Lee),” he said. “I knew he did not agree with the government stance that (his brother) voluntarily defected to North Korea, so I thought that he might be upset. But on the contrary he was warm and courteous.”

In an April 19 phone call with The Korea Herald, Rep. Kim admitted that at the meeting in Ansan, there had been a talk of possibly awarding a scholarship to the official’s son, who was still in high school at the time.

When asked again on Sunday, he said, “That (scholarship) was discussed only briefly, and not at all as a form of compensation.” Asked if he thought the mention of scholarship might have come across as an attempt to cajole the family, he said, “We were just worrying about the kids. I don’t recall anyone being uncomfortable.”

He said as of Sunday he has yet to be contacted by the National Human Rights Commission.

Others who were present at the meeting with Lee have denied the claims as well.

At a press conference on June 29, Rep. Hwang Hee said, “I might have said that the deceased may become a symbolic figure that puts a stop to these tragedies between the North and the South, but I have not said that I would offer the family anything if they acknowledge that it was a defection.”

According to a text message conversation seen by The Korea Herald, Hwang told Lee a few hours before the press conference, “I don’t understand. Did you tell the press yourself that I pressured you?”

After attaching a link to a news article and a crying face emoji, the lawmaker then said, “I wish to remind you that whether it was a defection or not was the Ministry of the Defense’s opinion that we (the Democratic Party task force) received.”

This is not the first time an inquiry was launched into the possible violations of the rights of Lee’s family.

In July last year, the National Human Rights Commission said that South Korean authorities disclosing details about the private life of the official like his financial situation “violated the victim and his family’s rights to privacy and other personal rights.”

The Democratic Party leadership has hit back at the claims.

Rep. Woo Sang-ho, the opposition’s interim leader, told a press conference Sunday, “The possibility that (Democratic Party lawmakers) would push or cajole the family to admit that the victim tried to defect to North Korea is zero.” 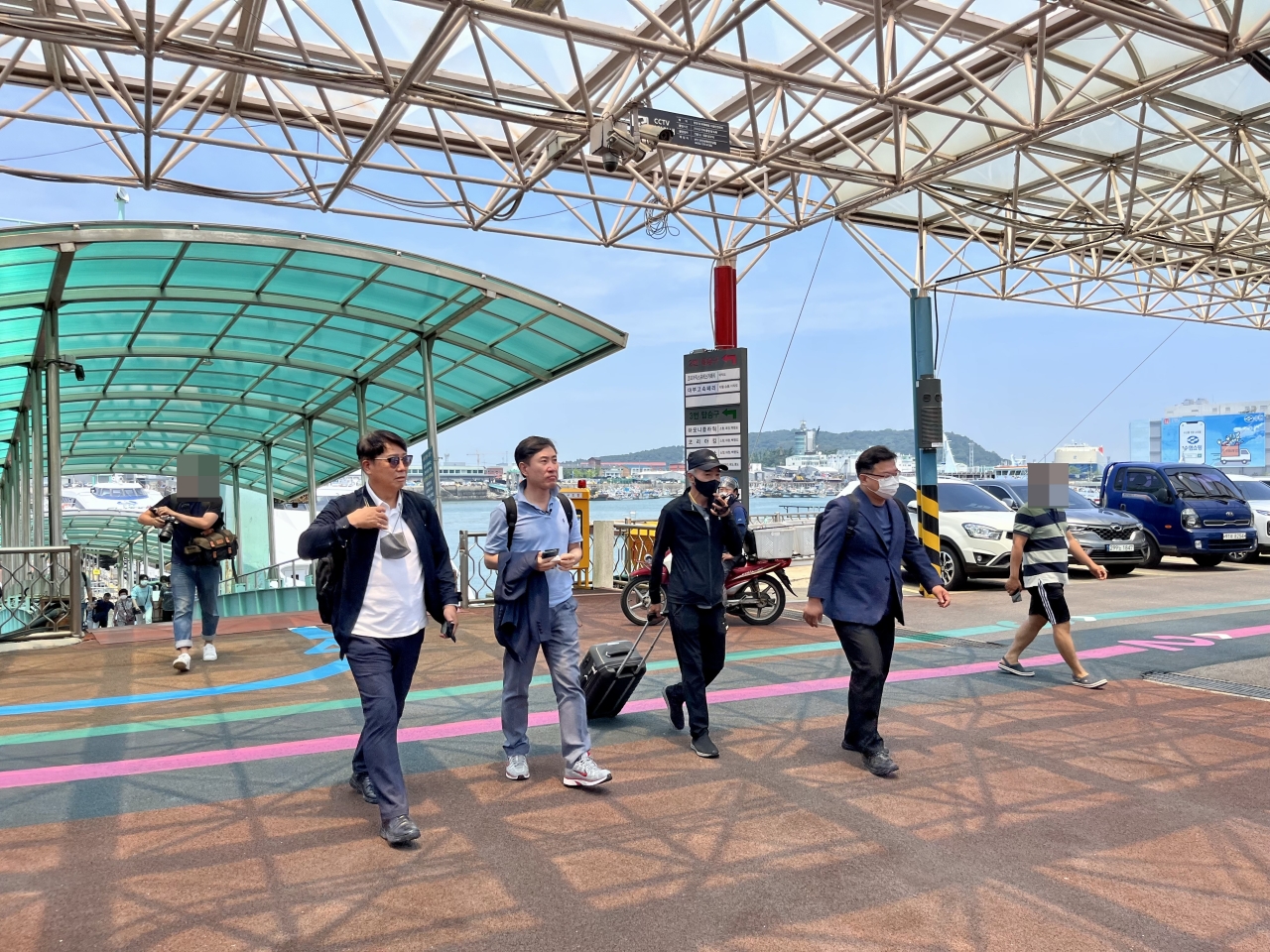 On Sunday an investigative returns from a trip to the site the slain fisheries official had first gone missing. From left, former chief of Cheong Wa Dae’s National Crisis Management Center, Kim Jin-hyung; People Power Party Rep. Ha ae-kyung; the fisheries official’s older brother Lee Rae-jin; and Lee family’s lawyer Kim Ki-yun. (Kim Arin/The Korea Herald)
Meanwhile, Lee family lawyer Kim Ki-yun on Monday filed for the Board of Audit and Inspection to look into what was communicated to the search squad by the presidential office and the government during the hours the official would still have been alive.

“We need to find out if and when Cheong Wa Dae and the Defense Ministry informed the search-and-rescue team about Lee’s exact location and the time of his capture, and what kind of orders were given by them,” he said.

Over the weekend, the family made a trip to the site near where Lee had gone missing in the company of the ruling People Power Party lawmaker Rep. Ha Tae-keung, two Oceans and Fisheries Ministry officials, and a former naval rear admiral, Kim Jin-hyung.

Kim, who helmed the National Crisis Management Center during the Lee Myung-bak administration, told The Korea Herald on Sunday, “From Lee’s disappearance to capture to execution, all of the events unfolded near the Northern Limit Line. Our authorities must have real-time intelligence about what goes on around that area.”

He said that as Lee is reported to have been killed about 3 kilometers north of the sea border, he would have been within the range of sight from the South’s waters.

“If our maritime and naval authorities were where they needed to be, near the NLL where the North’s troops would have been able to see them, I doubt that they would have dared to do something so atrocious to a South Korean public official,” he said.