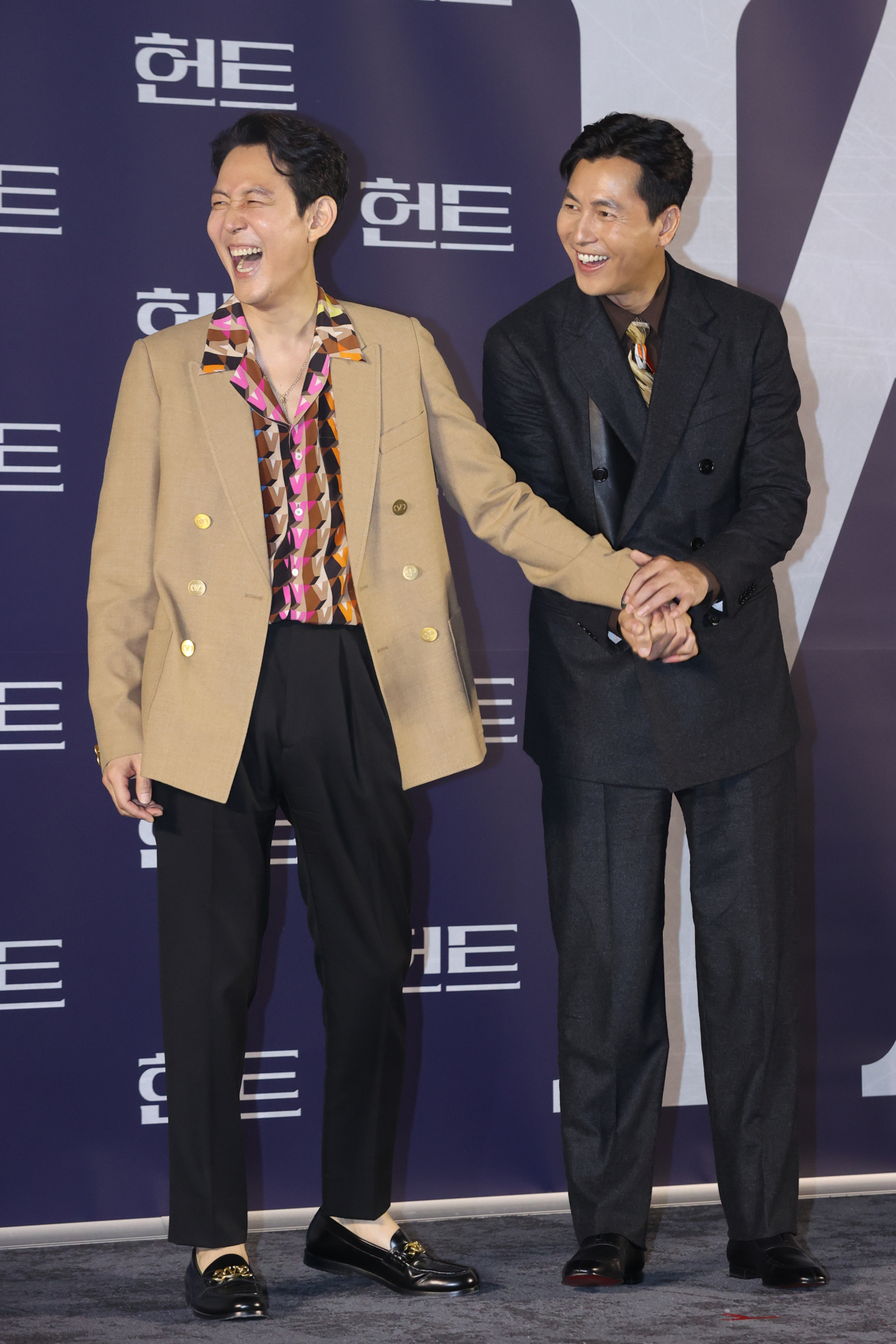 Not many people were surprised when it was announced that top Korean actor Jung Woo-sung would star in “Squid Game” lead actor Lee Jung-jae’s directorial debut feature.

The two top movie stars, who became close while filming “City of the Rising Sun” (1999), directed by Kim Sung-soo, have long been showing off their friendship on and off the screen.

At a press conference to introduce his upcoming “Hunt” at Megabox Seongsu in Seoul on Tuesday, Lee said he had to ask his best friend to take the role four times before he finally accepted.

At the press conference, Jung explained that he was careful about working with Lee again after more than two decades because he knew the public’s expectations would be high.

Lee and Jung both agreed that the original script, written four years ago, was not good enough, and lots of changes had to be made.

“I tried to read the script as objectively as possible. He (Lee) put a lot of effort into changing the script and felt like it was finally ready,” Jung said.

“Hunt” is set in the 1980s. Lee appears in the movie as Park Pyung-ho, an elite agent at the Agency for National Security Planning on the trail of a North Korean spy. During his chase, he becomes increasingly aware of his own country’s dark truths. Meanwhile, another elite agent named Kim Jung-do (played by Jung) starts to suspect that Park is a North Korean spy.

“I was so nervous handing the script to actors and asking them to join the project,” Lee said. “I wanted them to join because the work is good, not because of our friendship, so I was nervous.”

In the beginning, Lee said he only planned to be the film’s producer. When the actor found out that the project had hit obstacles, and that some changes had to be made to the original script, he started to consider directing. 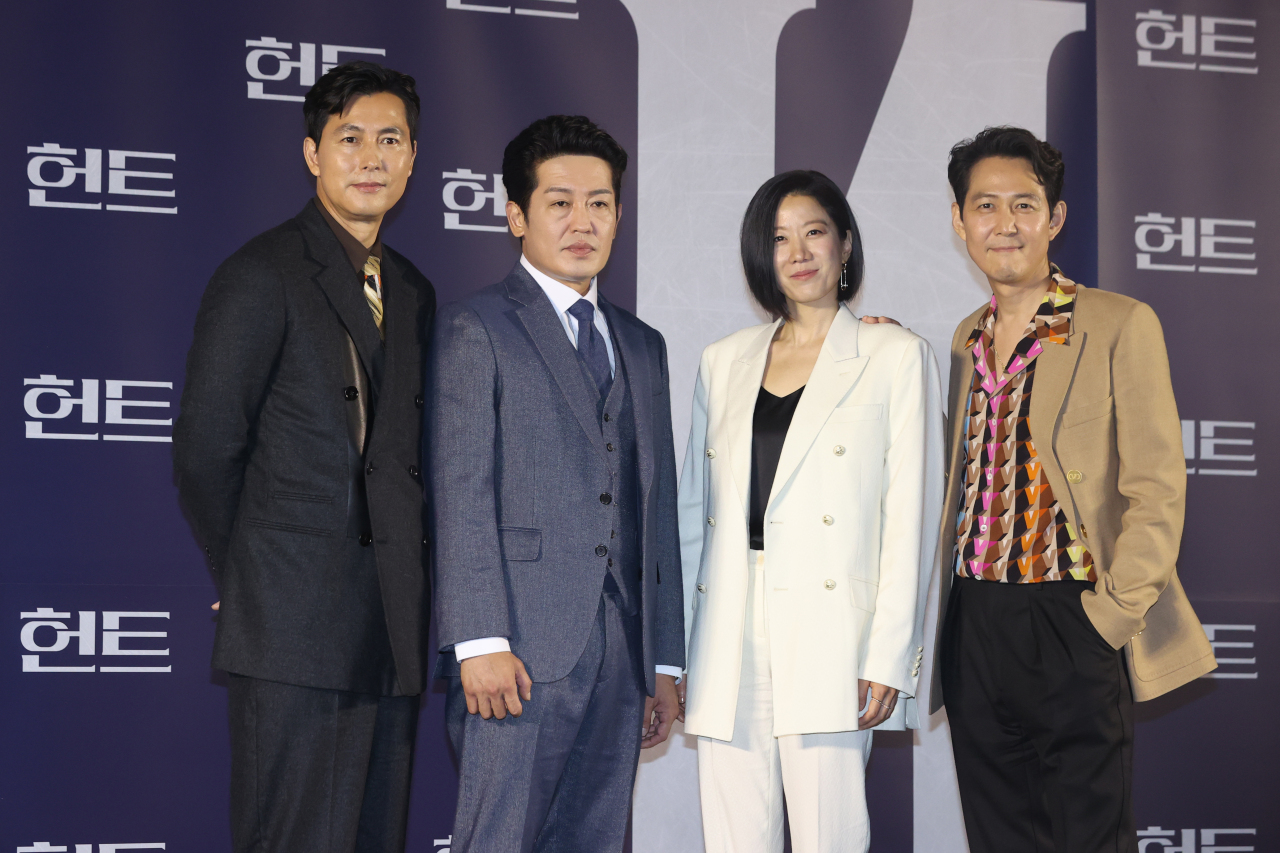 “I was not sure if I am qualified to be a director. I have been doing movies for a long time, but writing a script and directing was completely different. But I decided to muster up the courage and do it,” Lee said.

Jung said he closely watched Lee work hard on the new movie as both an actor and the director and thought, “My friend is going to die on the set.”

“He (Lee) was already tired after playing his character, but he still had to focus on work as a director. He was not done after filming his scenes, he had a lot of decisions to make and also prepare for the next shooting,” Jung said.

At the press conference, Lee thanked Jung for encouraging him while working on the set.

“Jung Woo-sung has experience directing ‘Guardian.’ He had some hard time back then and I gave him ginseng extract. This time, when we were working on ‘Hunt,’ Jung gave me wild ginseng extract,” Lee joked. “Guardian” is set to be released later this year.

Lee also talked about the film debuting as a midnight screening in the noncompetitive section of the Cannes Film Festival earlier this year.

“Cannes loves Korean movies, and it is a familiar film fest for Koreans. It was great that they invited my movie,” Lee said. “I talked about Korean films and promoted our film while I was there.”

“I remember meeting Lee Jung-jae for the first time on the ‘Squid Game’ set. It was in front of an elevator,” Heo, who also starred in “Squid Game,” said. “At that time, I did not imagine myself working with these two actors (Lee and Jung). I felt like I was dreaming of filming with them.”

Jeon said it was interesting to see both director Lee and actor Lee on the set.

“I could tell by his look,” Jeon said. “When he directed he wore sweatpants and sneakers. He wore the same thing all the time. And when he performed as Pyung-ho, his attitude totally changed. I could talk to director Lee very freely, but not Pyung-ho.”