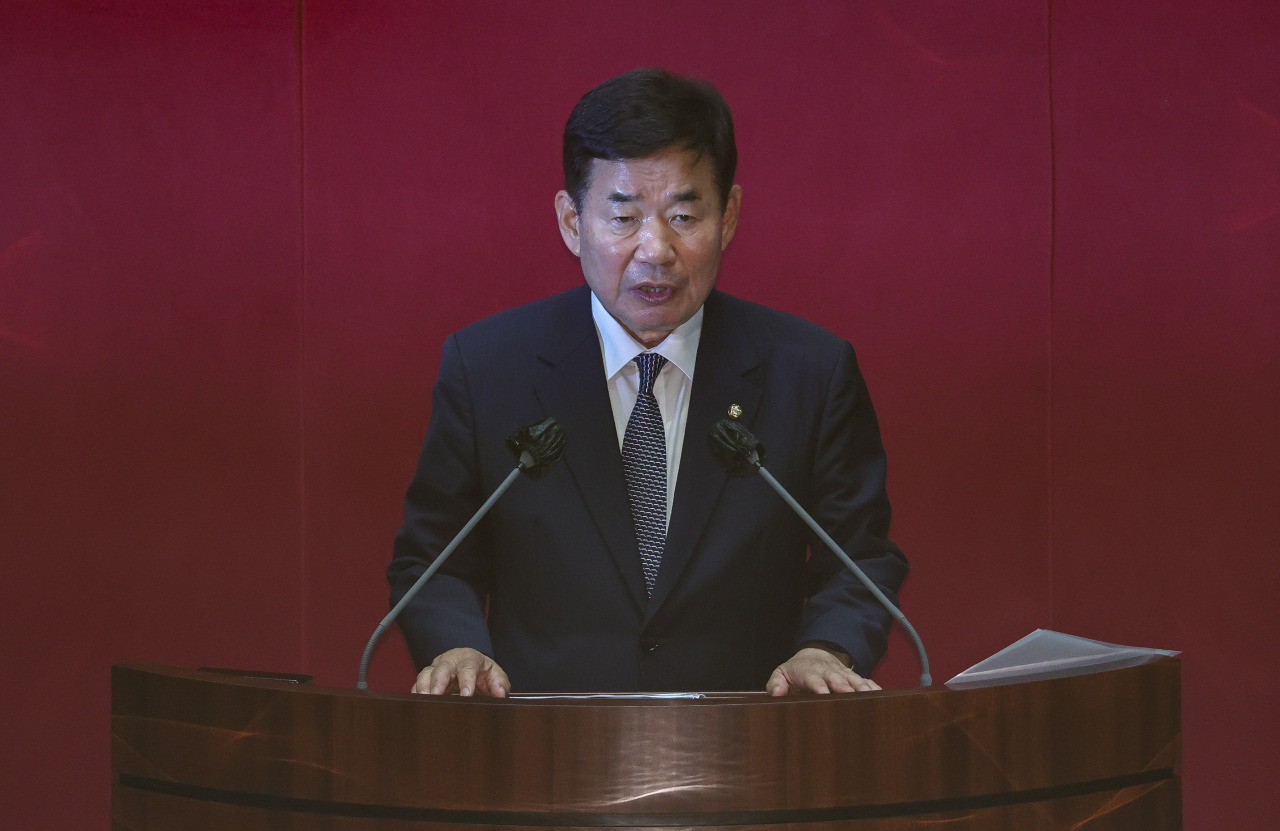 At a plenary session of this month’s provisional assembly held at 2 p.m. Monday, 255 out of 275 legislators present voted to elect Kim as the head of the legislative branch for the latter half of the 21st National Assembly.

The main opposition party controls 170 out of 300 legislative seats at the National Assembly. It chose Kim as its speaker candidate through an internal vote in May.

The five-term lawmaker represents a constituency in Suwon, Gyeonggi Province, and is a staunch member of the party. He previously served as finance minister in 2003 and education minister in 2005 during the Roh Moo-hyun administration.

The 75-year-old spent most his career as an official with the Ministry of Economy and Finance before entering politics. He served five consecutive terms as a legislator throughout his political career since winning in the 17th legislative elections in 2004.

The election came as the ruling People Power Party and main opposition Democratic Party of Korea succeeded in reaching a preliminary agreement on who will head which legislative committees.

Rep. Park Hong-keun, floor leader of the main opposition Democratic Party of Korea, said Monday afternoon that the party has decided to accept the ruling People Power Party’s terms offered less than an hour earlier and proceed to hold a plenary session to elect a new National Assembly speaker.

“To protect the lives of the people in face of this comprehensively threatening crisis, we can no longer wait to leave the National Assembly idle,” Park said in a meeting of the Democratic Party’s legislators.

“We will not start on our own but wait for a response from the People Power Party.”

Rep. Kweon Seong-dong, floor leader of the People Power Party, had earlier offered to join the Democratic Party’s move to elect a new speaker if the liberal party agrees to enter negotiations with the ruling party on naming new committee chairs.

“If the Democratic Party’s floor leader agrees to negotiate instead of unilaterally naming chairs for committees, we will cooperate to elect a new National Assembly speaker and deputy speakers,” Kweon told reporters after the meeting.

Kim’s election puts the National Assembly back to work after it was stalled for more than a month since late May. Delays in negotiations have prevented the National Assembly from holding confirmation hearings for President Yoon Suk-yeol’s Cabinet picks. More than 11,000 bills have also been sitting without review.

But chances remain for the trouble to flare up again, as parties have not made a final decision on committee chair picks. While the parties agreed to hold talks in naming chairs for the committees, the progress seen thus far has been anything but smooth and similar is expected for future talks.

The trouble started with the Democratic Party’s refusal to uphold the bipartisan compromise the two parties reached in July last year.

Under the arbitration of then-National Assembly speaker, floor leaders of both parties agreed in July last year to give 11 committee chair positions to the Democratic Party and the remaining seven to the People Power Party based on the number of seats each party held in the legislature.

The promise included the Democratic Party handing over the chair post for the Legislation and Judiciary Committee in July, when the latter half of the 21st Assembly starts for new chairs and the speaker is to be appointed.

Under Park’s lead, the Democratic Party refused to comply with last year’s deal, arguing the promise was an irresponsible move from negotiators of both parties. Since the People Power Party now stands as the ruling bloc, a new deal must be made, he claimed.

The Democratic Party then offered to let the People Power Party take the chair seat of the Legislation and Judiciary Committee, upholding the bipartisan compromise made in July last year. It instead asked the ruling party to agree to take part in the special committee on prosecution reform.

The People Power Party insisted the chair seat should come without any conditions, adding it cannot join the special committee. Kweon and other People Power Party legislators have said they cannot agree to any moves limiting the authority of the prosecution cannot be agreed upon.

The party later shifted its stance to agree to participate in the special committee on the condition that one of its legislators chair the committee, but the offer was met with fierce opposition from the Democratic Party just hours before the last minute agreement was reached to elect a new speaker.

The provisional assembly and Monday’s plenary session were scheduled due to the Democratic Party’s aim to unilaterally elect a new speaker and put the legislative branch back to work after negotiations continued without any solid progress.