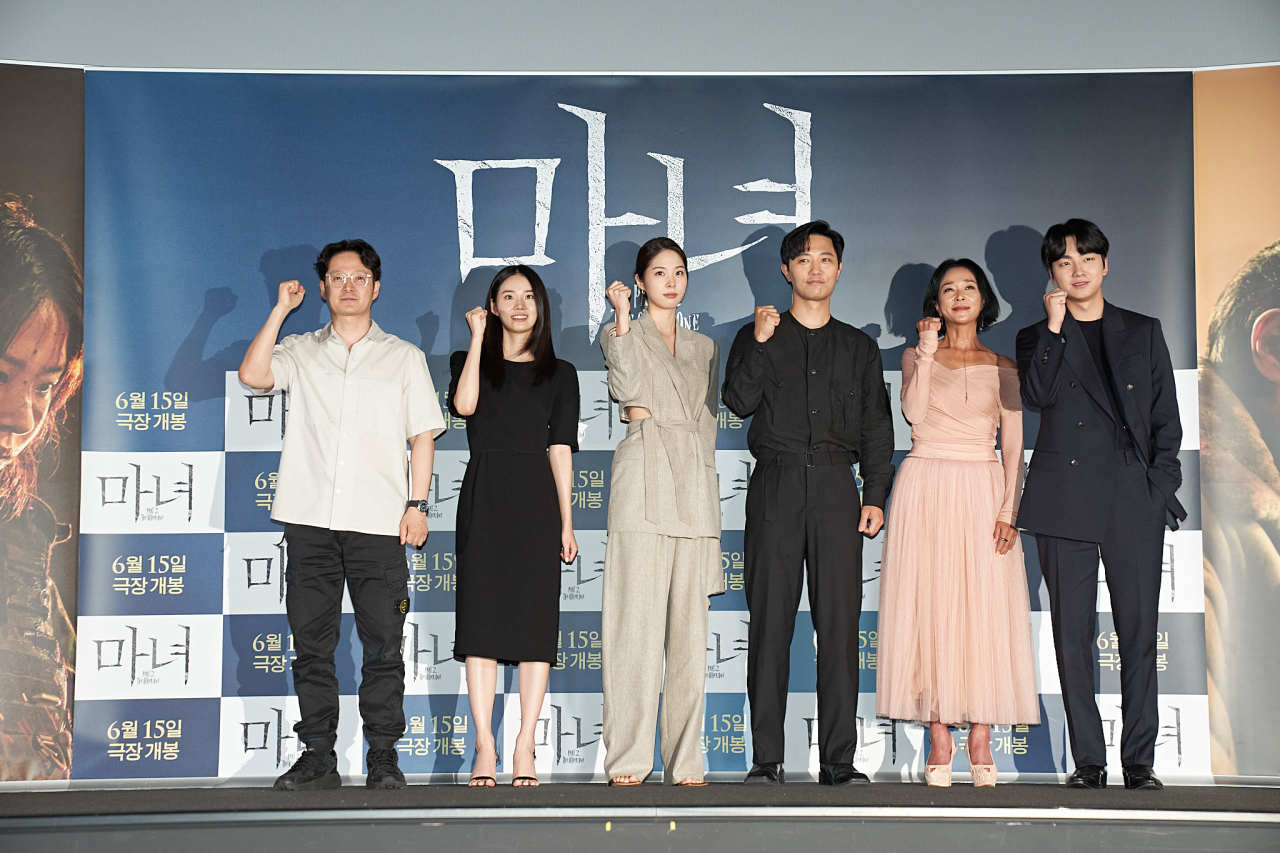 From left: Director Park Hoon-jung, actors Shin Shi-a, Seo Eun-soo, Jin Goo, Jo Min-soo and Sung Yoo-bin pose after a press conference for “The Witch: Part 2. The Other One” held at CGV Yongsan on Tuesday. (NEW)

Director Park Hoon-jung’s “The Witch” universe is expanding further with new characters, upgraded special powers and storyline in “The Witch: Part 2. The Other One.”

Park’s “The Witch”, released in 2018, features the story of a seemingly ordinary girl named Ja-yoon (Kim Da-mi) who wins top prize on a TV audition program. After her victory, a series of unusual people enter Ja-yoon’s life, including the mysterious scientist, Dr. Baek.

The sequel will introduce a new character, So-nyeo (Shin Shi-a), the lone survivor of a secret laboratory. In “The Witch: Part 2. The Other One”, So-nyeo will be chased by a series of different characters, including Dr. Baek, each with their own reason for pursuing the character.

The relationship between Ja-yoon and the new character will also unfold in Park’s upcoming film.

Park is one of the few Korean directors to create a sequel that expands the universe of their original movie. In a recent press conference held at CGV Yongsan, the director talked about the elements he sees as necessary to creating a film franchise.

Park also hinted that he hopes to create many more movies in “The Witch” series in the future.

“There are so many characters’ stories that I have yet to unfold. ‘The Witch: Part 2. The Other One’ actually tells the story that I initially wanted to tell in a third movie. So I think there should be a movie that features a story about what happened between the original film and the sequel,” the director said.

Actor Jo, who also starred in “The Witch: Part 1. The Subversion” as Dr. Baek, shared her excitement at being part of franchise films.

“I dare say that maybe we can also create a team like ‘The Avengers.’ I hope that happens. I want ‘The Witch’ to form a bigger universe with many more diverse characters in the future,” Cho said.

After the release of the first film, Kim, who played Ja-yoon, became a breakout star, something that Shin has said added extra pressure on her performance as So-nyeon.

“I was a fan of the first installment and Kim Da-mi’s performance, so I felt there was extra pressure on me,” Shin said.

Shin went on to say this pressure actually made her work harder on creating a character that is different from Ja-yoon.

The director also talked about the differences between Ja-yoon and So-nyeo. The director explained that his focus was on finding an actor that could play the innocent girl that Ku Ja-yoon seemed to be at the beginning of the first movie.

“When looking for an actor that can play Ku Ja-yoon, I focused on finding a person that can show both sides of the character and deliver a plot twist,” he said.

However, the sequel fully discloses from the start that So-nyeo has special powers. According to the director, an actor who could show that from the start was selected.

“I searched for an actor that looks similar to Da-mi but different at the same time,” the director said. “I think the way they move is different. Ku Ja-yoon moves more swiftly whereas So-nyeo moves more stiffly.“

Besides So-nyeo, another notable introduction in the sequel will be Jo-hyun (Seo Eun-soo), a trained agent with special powers who pursues So-nyeo on behalf of Dr. Baek. 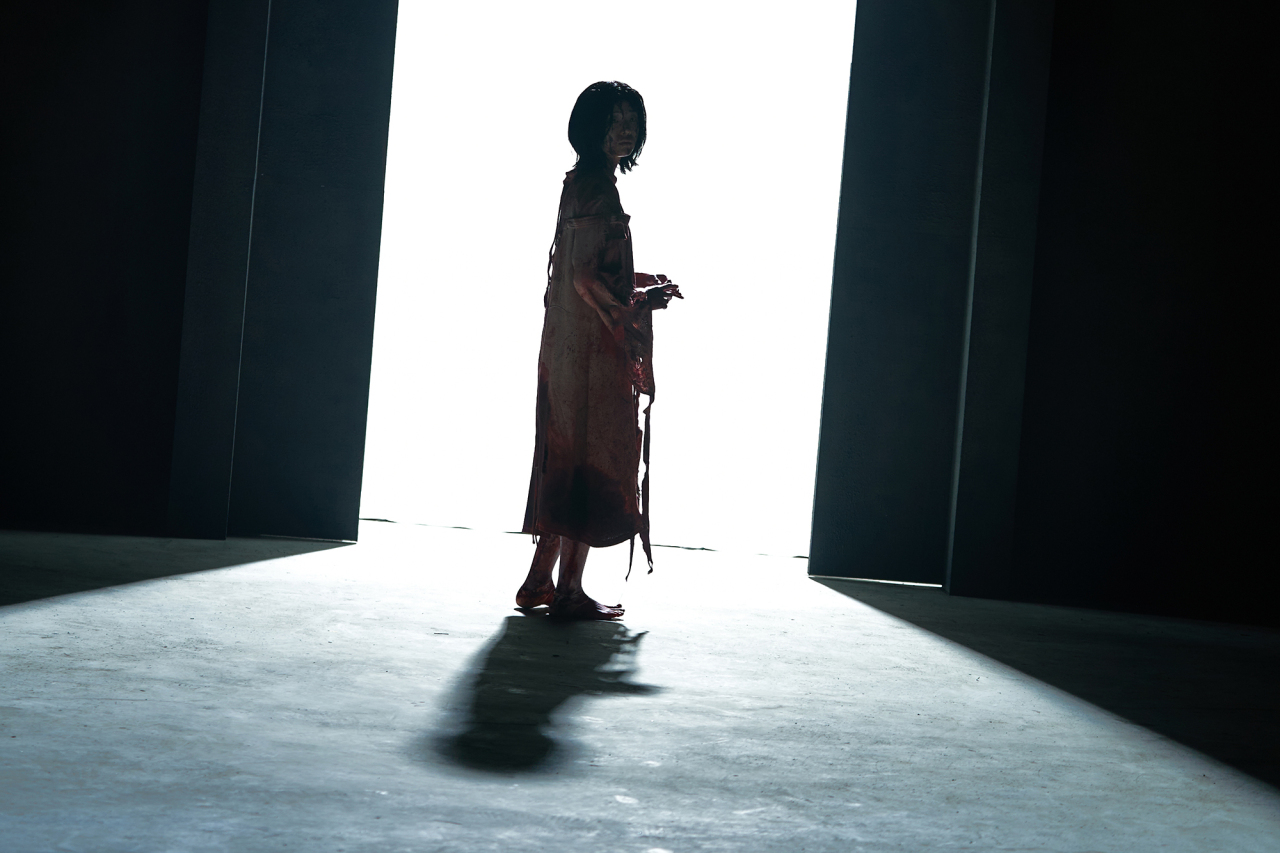 A scene from “The Witch: Part 2. The Other One” directed by Park Hoon-jung (NEW)

In the film, Seo had to perform mostly in English as she mainly worked with English-speaking subordinate agent Tom (Justin John Harvey).

“Before shooting the film, I had an English teacher. Once we started shooting on Jeju Island, I got help from Justin, who played Tom in the film,” Seo said. “If the lines were in Korean, I can adjust it a bit or improvise, but with English lines, it was not possible to do that.”

Seo added that she was later relieved by the director, who told her that her character is Korean so she does not have to be especially fluent in English.

Park‘s new film is set to be released on June 15.