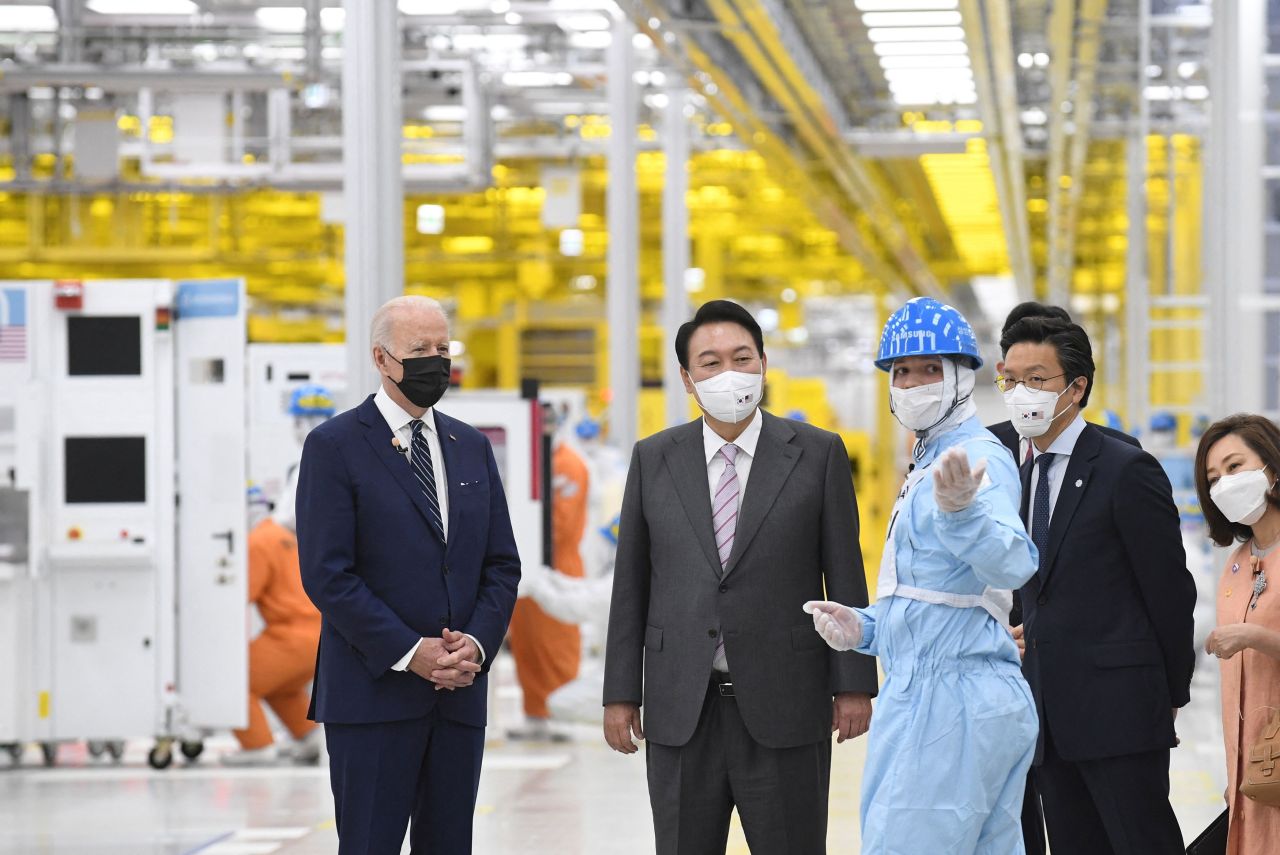 This can be achieved by strengthening collaboration with technology powerhouses in Asia’s fourth-largest economy, the summit between President Yoon Suk-yeol and Biden showed.

To this end, Yoon and Biden called on the need for more investment, research and people-to-people exchanges of experts to nurture innovative products and technologies from Korea and the US, including thinner semiconductor chips, the batteries that power electric vehicles, civil nuclear power reactors to cut carbon emissions, and more.

On Saturday, Yoon told reporters that the summit during Biden’s three-day visit to Korea marked an agreement “to step up (Korea’s) practical cooperation” in the fields of semiconductors, batteries, civil nuclear power, space development and cyberspace, adding these are a matter of “economic security.”

“As a first step, our offices will launch an economic security dialogue so that in supply chains, advanced science and technology, and other areas of economic security, our two countries can have timely communication and cooperation,” Yoon said.

“The tragedy brought on by Russia’s invasion of Ukraine must be resolved swiftly so that the people can return to their peaceful, normal lives.”

The decision comes against the backdrop of growing supply chain disruptions that are affecting the livelihoods of ordinary people and the overall national economy.

Korea has suffered supply shortages of critical materials and products, including consumer goods like cars as well as diesel exhaust fluid.

“Due to the COVID-19 pandemic and the formation of the blocks in the market, we see permanent risks when it comes to the supply chain,” Yoon said, adding the lapses in economic security could lead to threats to national security as well as to military security. 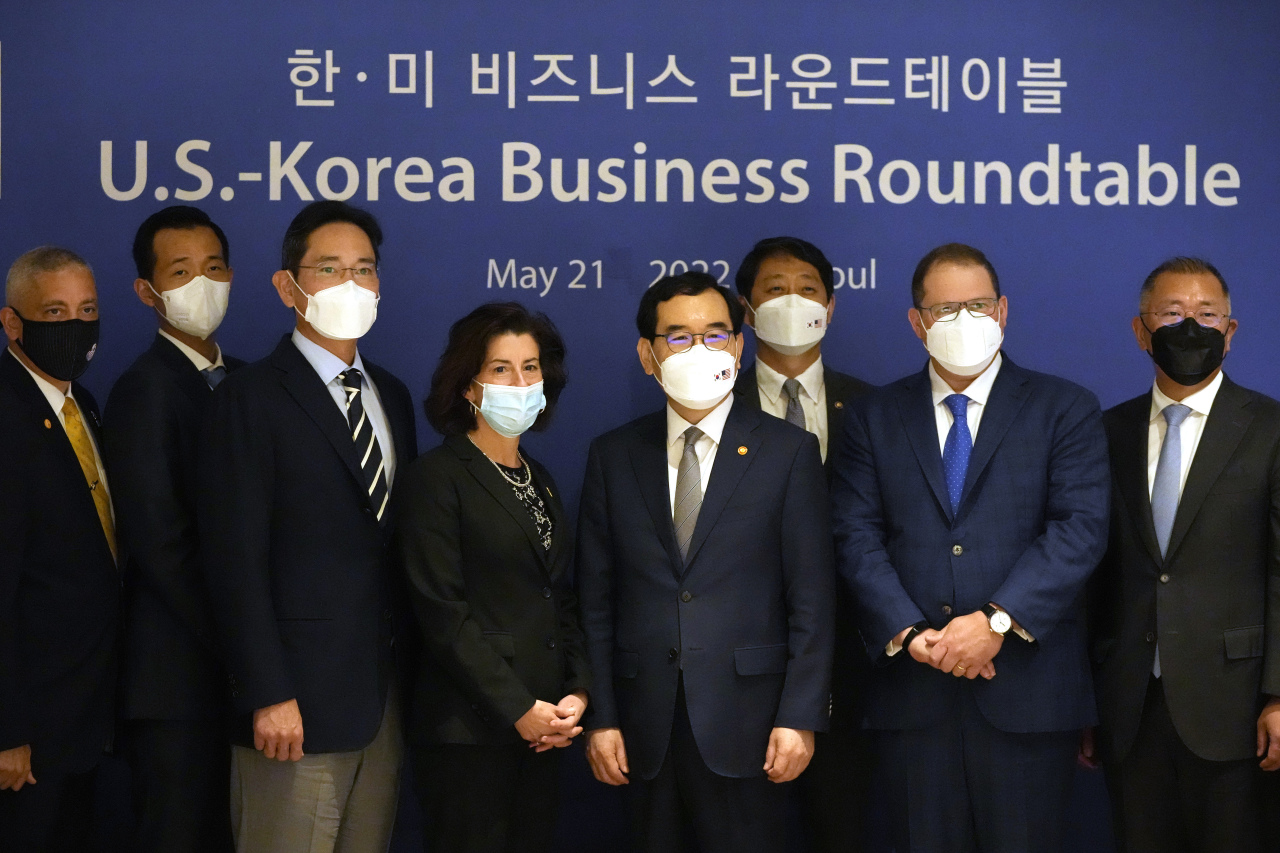 US Secretary of Commerce Gina Raimondo (fourth from left), and South Korean Minister of Trade, Industry and Energy Lee Chang-yang (fifth from left) pose with business leaders in Seoul, South Korea, Saturday. (AP-Yonhap)
This highlights the growing role of Korea in the Asia-Pacific region when it comes to addressing the supply chain challenges.

“Our two nations are working together to take on both the opportunities and the challenges of the moment, continuing to fight COVID-19, securing the supply chains, tackling the climate crisis, deepening our security cooperation to meet regional challenges and writing the rules of the road to ensure the Indo-Pacific is a free and open area,” Biden told reporters.

The summit suggested a regular ministerial-level Supply Chain and Commercial Dialogue between Korean Industry Minister Lee Chang-yang and US Secretary of Commerce Gina Raimondo, aimed at discussing the promotion of resilient supply chains of products including semiconductors and batteries, as well as critical minerals. Previously, the two nations had held working-level discussions for the matter.

Private companies in Korea have been moving in tandem.

Tech giant Samsung Electronics announced in November a $17 billion plan to build a foundry plant in Taylor, Texas, aiming to begin operations in 2024. Samsung has also reportedly filed for greater investment with authorities in the area -- the Taylor and Manor school districts in Texas -- and more tax breaks in return.

Samsung’s track record in the US was in the spotlight during Biden’s visit on Friday to a chip plant in Pyeongtaek, Gyeonggi Province, including the Texas chip plant and its battery affiliate Samsung SDI’s effort to build a battery factory with Stellantis through a joint venture announced in October.

Moreover, SK Group’s wafer production arm SK Siltron also unveiled in November a $600 million investment plan in the US to expand production capacity over the next five years. 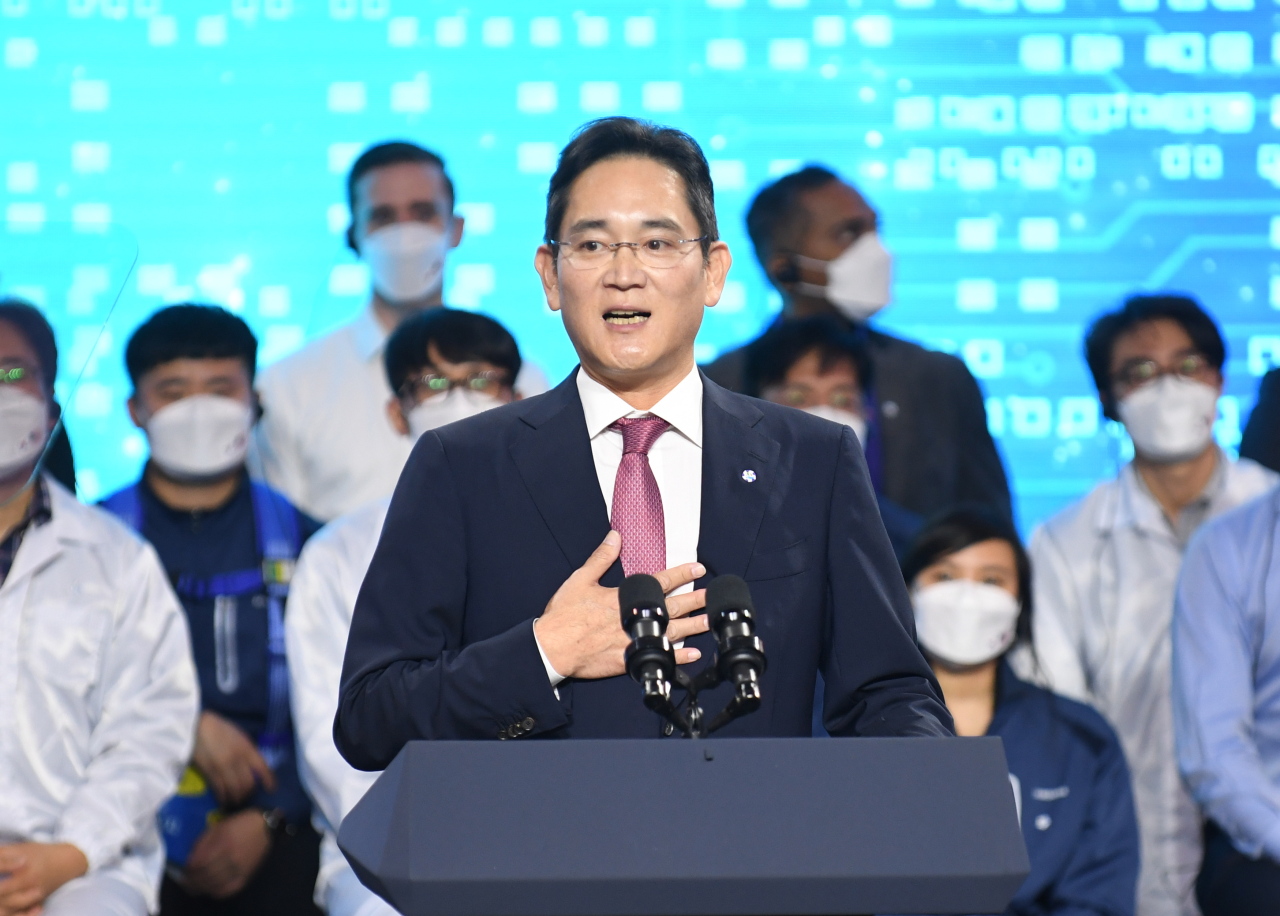 Samsung Electronics Vice Chairman Lee Jae-yong speaks during a press conference following US President Joe Biden's visit at the Samsung Electronic Pyeongtaek Campus in Pyeongtaek, south of Seoul, South Korea. (EPA-Yonhap)
The US is facing imminent pressure to stay in the global chip arms race amid China’s bid to expand chip manufacturing. In 2021 alone, Chinese firms announced $26 billion in investment plans through 28 projects across China, showed an estimate by the Semiconductor Industry Association, an advocacy group in the US.

Korea is projected to become home to the third-largest semiconductor chip production base. By 2030, Korean firms will be responsible for nearly 20 percent of total chip production, trailing China with 24 percent and Taiwan with 21 percent, according to a report jointly conducted by the SIA and Boston Consulting Group. US firms are projected to produce a combined 10 percent of chips globally in 2030.

On the electric vehicle front, automaker Hyundai Motor unveiled a combined $10 billion plan to invest in the US during Biden’s visit to Korea.

On Sunday, Hyundai Motor pledged a $5 billion investment in robotics, autonomous driving, air taxis and artificial intelligence, a day after it unveiled a $5.5 billion plan to build full electric vehicle and battery manufacturing facilities in Bryan County, Georgia, aiming to kick off in 2025.