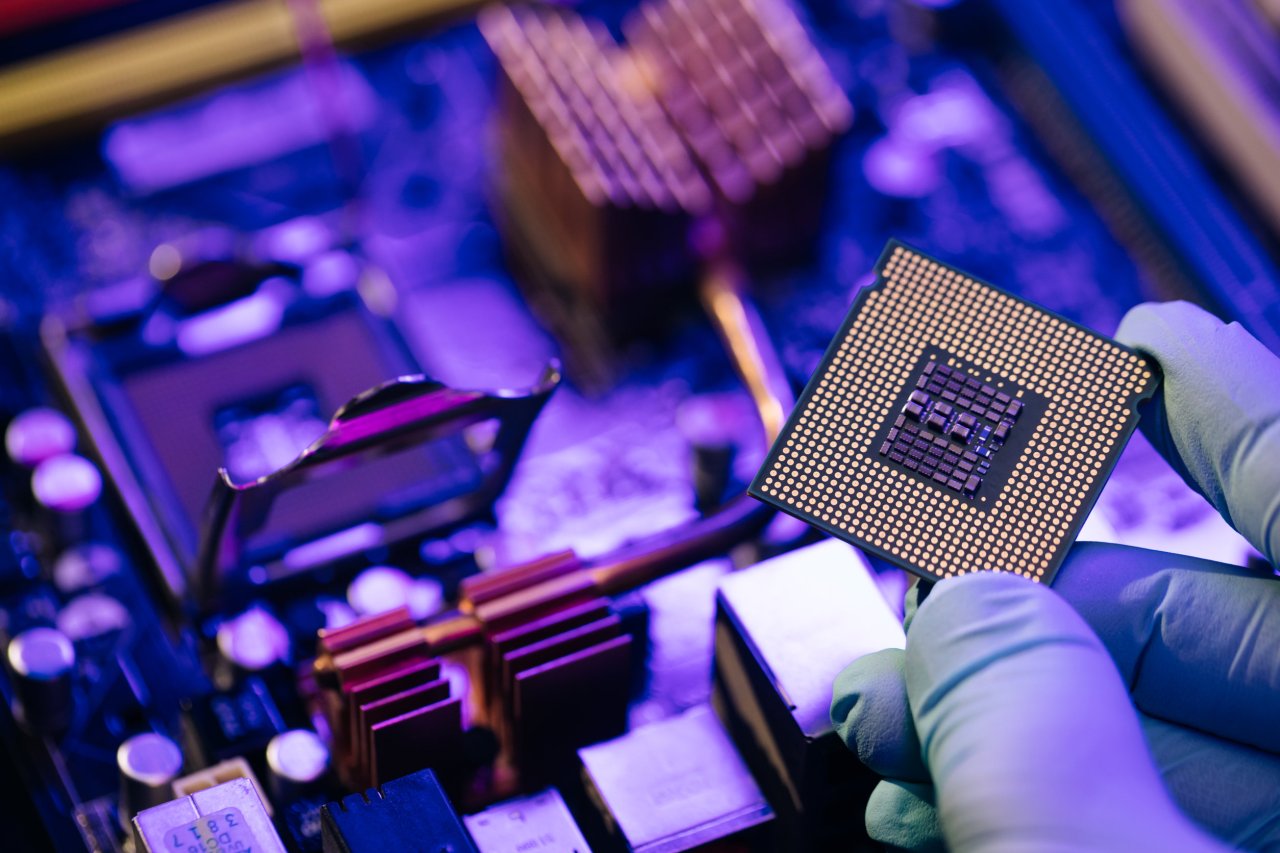 A microchip circuit board with microprocessor information on a computer motherboard in the foreground (123rf)
This is the first installment of a two-part series on Korea's Chips Act and controversies surrounding a law meant to support the local chip industry amid heated competition around the world. -- Ed.

In the wake of the global chip shortage, supply chain disruptions posed by the pandemic, and tensions between superpowers -- the United States and China -- governments around the world are scrambling to support and protect their respective semiconductor chip industries.

South Korea is one of the countries to do so with its own version of the Chips Act, which passed the National Assembly on Jan. 11. The new rules are meant to offer state support to the domestic chip industry currently led by Samsung and SK.

With the new special law, overseen by the prime minister‘s office, Korea is setting out a pangovernmental effort to minimize confusion often caused by regulatory overlaps. In addition, the government looks to offer tax incentives, an abridged feasibility study of chipmakers’ projects, indirect investment in promising chip companies, as well as measures to prevent trade secret theft.

But the rule, however, appears to be less enthusiastic than those of the rest of the world coming underway.

The US is now awaiting a passage of a $52 billion bill called the CHIPS Act, a short of Creating Helpful Incentives to Produce Semiconductors for America Act.

The bill supports increased federal government funding for research, which would lead to an estimated growth of the US gross domestic product by $161 billion and the creation of 500,000 jobs by 2029, according to US chip industry advocacy group Semiconductor Industry Association. The projection stems from SIA’s finding that each dollar invested by the US government into semiconductor research has increased overall GDP by $16.50.

The US CHIPS Act also supports up to 40 percent of investment tax credit for facility investments and purchase of chip manufacturing equipment, as well as a federal grant program to encourage private sector spending for new domestic chip production lines.

Meanwhile, China has come up with incentives to offer tax exemption to companies producing run-of-the-mill chips made with between 28 and 65-nanometer processes for the first five years, followed by up to 50 percent in corporate tax breaks for the next five years. The $1.4 trillion chip drive supports Beijing’s goal to meet 70 percent of domestic semiconductor needs by 2025 in the face of US sanctions, from 16 percent in 2020.

Europe is also looking to propose its own CHIPS Act in February, in hopes of quadrupling microchip production across the continent by 2030.

President Joe Biden leaves after speaking about Intel’s announcement to invest in an Ohio chip making facility, at the South Court Auditorium in the Eisenhower Executive Office Building on the White House Campus in Washington Friday. (AP-Yonhap)
Unlike those of the US, China and Europe, Korea‘s new law does not open numerical targets as to how much it would cost for the Korean government to carry out its plans and what the outcome would be in terms of economic growth or job creation.

Under the new rule, Korea’s large corporations such as Samsung Electronics and SK hynix will be subject to a 6-10 percent of a corporate tax break for facility investment and 30-40 percent of tax credit for research and development.

The smaller the companies are, the larger the degree of tax relief would be, up to 20 percent for spending in facilities and 50 percent for research.

This is a step up from the current rule, where large corporations are eligible for just up to 2 percent tax benefits on their investments in memory chip designs and manufacturing technologies. But the tax break suggestions are still considered small compared to superpowers.

Balancing act instead of winner-take-all

What has made Korea‘s chip act look less ambitious appears to have something to do with the government’s mantra in realization of equality and regional balance.

Unlike the drafts of the bill, large corporations would not be exempt from the 52-hour workweek regulation and the universities in the greater Seoul area would not be able to retain more talents into semiconductor-related colleges. Experts say requests from local industries and academic circles have been omitted or less reflected in the new law.

This is partly due to the overarching regulation to curb the expansion of the greater Seoul area for balanced economic growth across the nation, stipulated under the Seoul Metropolitan Area Readjustment Planning Act.

“The Chips Act could have solved the manpower shortage, had it permitted universities’ addition or expansion of semiconductor-related colleges,” said Park Jea-gun, semiconductor materials professor at Hanyang University. “No clause stipulates the exemption from regulation banning expansion of Seoul.”

Although the Korean Chips Act would be less ambitious than hoped, it will still lay the groundwork for the private sector to advance further.

“Korean semiconductor firms have faced manpower shortage and restricted use of land because their operations have been primarily located in the Seoul metropolitan area, ironically leaving them susceptible to regulation overlay,” Park said.

“Things would be different with the new law because the regulation overlay will give way to a new control tower.”

The new set of rules has effectively put Korea on a map of countries in a heated arms race to deal with the chokepoint in the supply chain, as semiconductor chips are becoming key components of gadgets, cars, home appliances and wireless networks infrastructure.

The time is ripe for government spending and actions, as the global chip industry is becoming too complex to rely on private-sector investment for growth, experts say.

“Countries around the world are beefing up governmental support for the semiconductor industry, and we would have been lagging behind in the race if we were not in time.” 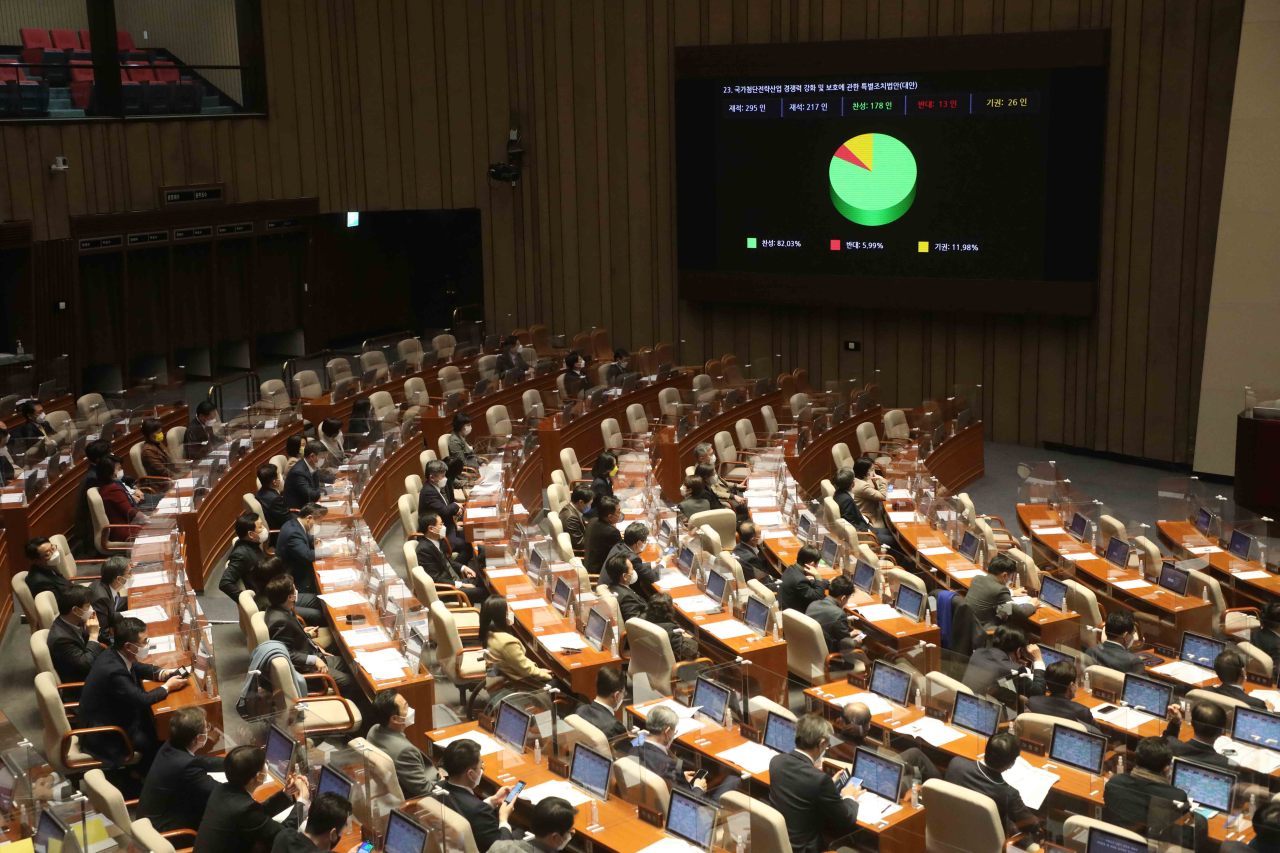 A view of a plenary session of the National Assembly in Seoul when Korea's Chips Act was passed on Jan. 11. (Yonhap)
The Korean government has so far unveiled plans to spend 880 billion won ($737.5 million) this year for financial aid, in the country where tech titans Samsung and SK hynix is poised to spend a combined 55 trillion won in 2022. It is unclear how much government spending would entail for future tax breaks starting next year.

Lee of Seoul National University said the law “will allow the experts to start a discussion on the future estimate of government spending, considering the binding forces of the law.”

“Without the law, (policies to support the semiconductor industry) have not been a priority in state budget planning and were prone to a withdrawal.”

Korea has sought to invest 510 trillion won by 2030 to secure a supply chain in a “K-Semiconductor Belt Initiative” unveiled last year, but the move lacked legal grounds.

The Korean equivalent to the CHIPS for America Act will go into effect starting July this year, and the new rule covers not only semiconductors but also other cutting-edge technologies, such as batteries and advanced materials.