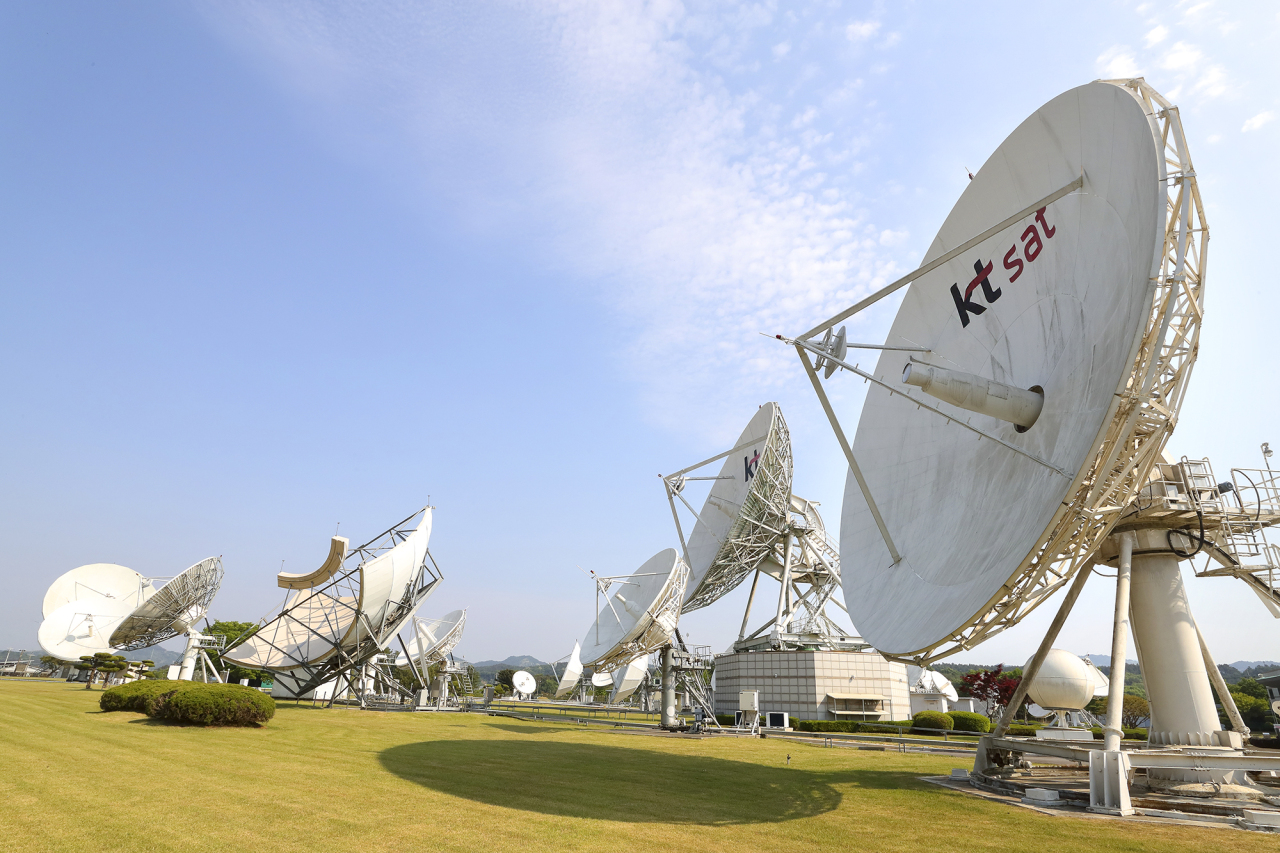 An exterior view of antennas at KT SAT Kumsan Satellite Service Center in Geumsan, South Chungcheong Province (KT)
GEUMSAN, South Chungcheong Province -- As the world shifts toward the next generation of connectivity for more immersive experiences and real-time communications, more sophisticated satellite connections will be needed, as simple single-orbit approaches are likely to struggle with the data processing in the future.

KT SAT, a South Korean satellite communication services provider, was the latest to express a bid to implement a multiorbit strategy -- combining geostationary and lower-Earth orbit satellites -- taking a leap forward from its single-orbit approach.

“KT SAT aims to add more high-throughput satellites and at the same time satellites at the lower-Earth orbit, in order to achieve a level of connectivity that powers artificial intelligence and internet of things.”

According to the company, the multiorbit strategy is key to enhancing the data throughput and widening the geographical coverage to meet 6G requirements, given the limitations of terrestrial infrastructure.

Geostationary Earth orbit satellites orbit at an altitude of some 36,000 kilometers at a speed that matches the Earth’s rotation, meaning that they stay in the same position above the Earth’s surface.

On the other hand, the lower-orbit satellites must travel faster to keep themselves in orbit. Without a high travel speed, the Earth’s gravity will pull them out of orbit.

Meanwhile, these low-flying satellites are believed to be capable of handling communications for high-performance computing, once there are enough of them to provide global coverage.

While KT SAT plans to send up one more high-altitude satellite by as early as 2024, it is now looking for partnerships to run the constellation of lower-Earth orbit satellites it thinks will be needed for 6G. 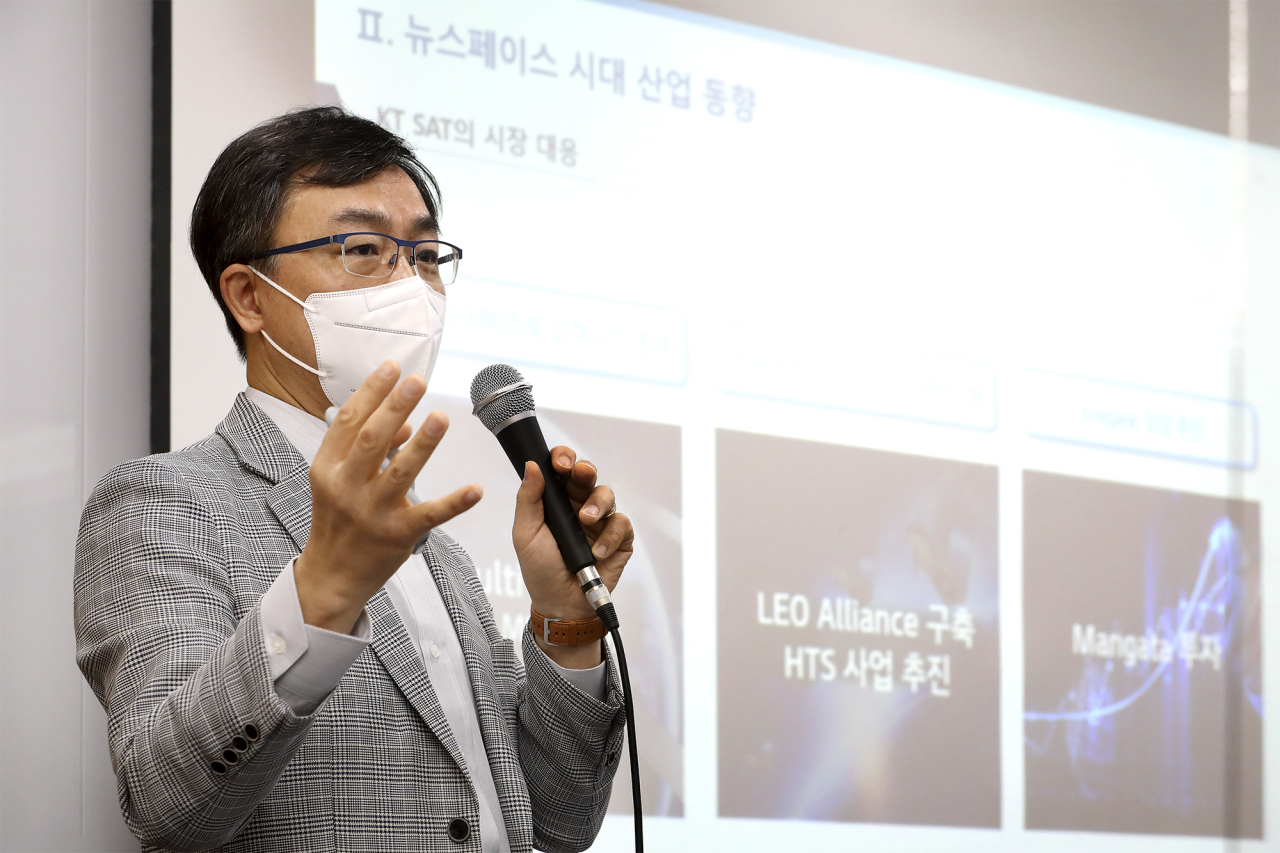 KT SAT Chief Technology Officer Choi Kyung-il (KT)
“We are open to collaborating with low-Earth orbit satellite operators that are willing to take advantage of our satellite services that use geostationary satellites,” Choi said.

Choi added the company is already in talks with undisclosed partners about using low-Earth orbit satellites that could provide global coverage.

This, according to Choi, is an extension of a proposal by KT SAT Chief Executive Officer Song Kyung-min to forge a low-Earth orbit alliance with regional satellite service providers at World Satellite Business Week hosted by Euroconsult in Paris, France, late last year.

The company also took part in a $33 million fundraising of US multiorbit startup Mangata Networks in January, in the funding round led by US venture capital firm Playground Global. Magnata Networks is dedicated to fostering a mid-Earth orbit constellation with over 30 satellites, according to Choi.

“Considering the cost burden, no single entity can build a constellation of satellites alone. We are ready to enter this new business if the situation allows us to,” Choi said.

In addition to the low-Earth orbit satellites, KT SAT is looking at other ways to leverage its communication capacity. It launched a service offering optical, radar and thermal satellite imagery in May. It is also looking at multiaccess edge computing solutions, and services to allow better communications between satellites and terrestrial networks.

The venue of the briefing, Kumsan Satellite Service Center, is the first satellite ground station in Korea established in 1970.

The teleport in Geumsan, which houses 45 satellite antennas, is one of the four teleports run by KT SAT -- along with ones in Yongin, Gyeonggi Province; Cheonan, South Chungcheong Province; and Singapore.

KT SAT has been dedicated to satellite services such as mobile telecommunication, satellite television, maritime communications and government projects such as satellite-based augmentation systems for road navigation.