[ The Korea Herald – Send E-mail ]
[From the Scene] KT SAT aims to connect flights, ships around the world
45 high-spec antennas installed at its Geumsan teleport reach out to over 7,000 customers
By Song Su-hyun
Published : Jun 7, 2018 - 17:24
Updated : Jun 7, 2018 - 17:24
GEUMSAM, South Chungcheong Province -- On a vast landmass of around 61,000 square meters in Geumsan County in South Chungcheong Province, a total of 45 satellite antennas have been erected to communicate with five KT SAT-owned satellites revolving in an orbit.

These antennas are there to enable 510 vessels in waters and 333 aircraft flying over the sky to stay connected with onshore areas, providing secured communications and remote management and control of the ships and flights.

Established in 1970, the KT SAT Geumsan Satellite Center had served as a regional teleport with limited coverage of up to the Philippines. KT SAT is a subsidiary of South Korean mobile carrier KT. 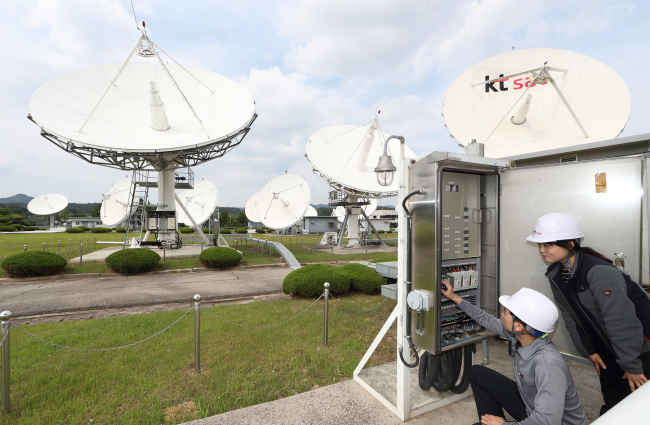 An engineer checks a satellite antenna at KT SAT Satellite Center in Geumsan, South Chungcheong Province, Thursday. (KT)
However, with the latest launches of Mugunghwa 7 and 5A Satellites last year, the company has significantly expanded its coverage to nearly the whole world, including all oceans and bay areas, to play a pivotal role as the biggest teleport in Asia, according to the company.

Located on an overlapping point of the Pacific and Indian oceans, the teleport is geographically advantaged to cover nearly all parts of the world, including offshore areas and remote valleys in mountainous regions, said Han Won-sic, president of KT SAT.

With the latest launch of the Mugunghwa 5A Satellite in Florida in October, the company has been able to provide satellite services covering the Korean Peninsula, the Philippines, Indochina, the Middle East, Mongolia, South Asia, and the oceans including the East Sea, the Southeast China Sea, the Bay of Bengal and Arabian Bay.

“Thanks to the new satellite launch last year, we are emerging as a real global satellite business, and we are trying to transform from a middlemen business into a service platform business,” said Han. 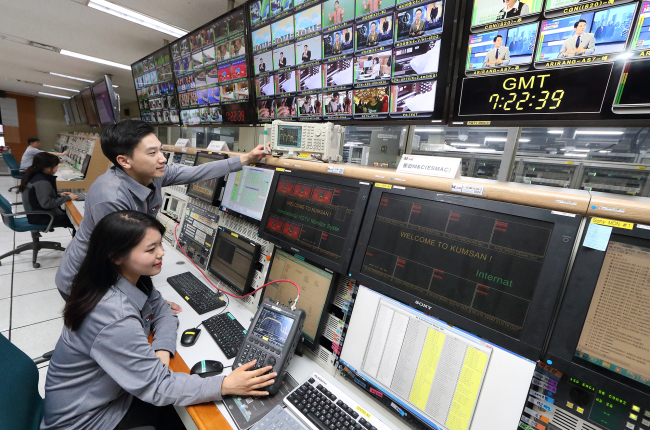 Engineers monitor telecommunications systems for the Marine Very Small Aperture Terminal service that enables telecommunications and data transmission for sailing vessels at KT SAT Satellite Center in Geumsan, South Chungcheong Province, Thursday. (KT)
Satellite Over Things can be likened to the internet of things service on land, which KT SAT is designing to build a system for remote management of sea fleets in deep waters.

For the Connected Ship service, the company has been developing an autonomous sailing system for vessels in partnership with a renowned university with an aim to launch the first autonomous ship model soon, the president said.

MVSAT is currently available for ships, offering the 2 Mbps communications service for over 500 ships, while its IFC service is being provided for around 330 flights.

Han expects the number of flights with internet available through KT SAT’s IFC service to exceed 5,000 by 2025.

The upcoming services will be much more secure as the company is working to apply quantum cryptographic communications technology and private blockchain technologies for perfect data security of its customers, the company said.

This year, eyeing Southeast Asian markets, such as Indonesia, Pakistan, Myanmar and Thailand in particular, the company aims to reach 20 billion won ($18.7 million) in overseas sales, which would account for 46 percent of expected annual sales.

“Not only the Southeast Asian region, but also North Korea could be our next market where we think we can contribute to the upbeat mood for reunification by helping establish satellite-based telecommunications infrastructure,” Han said.