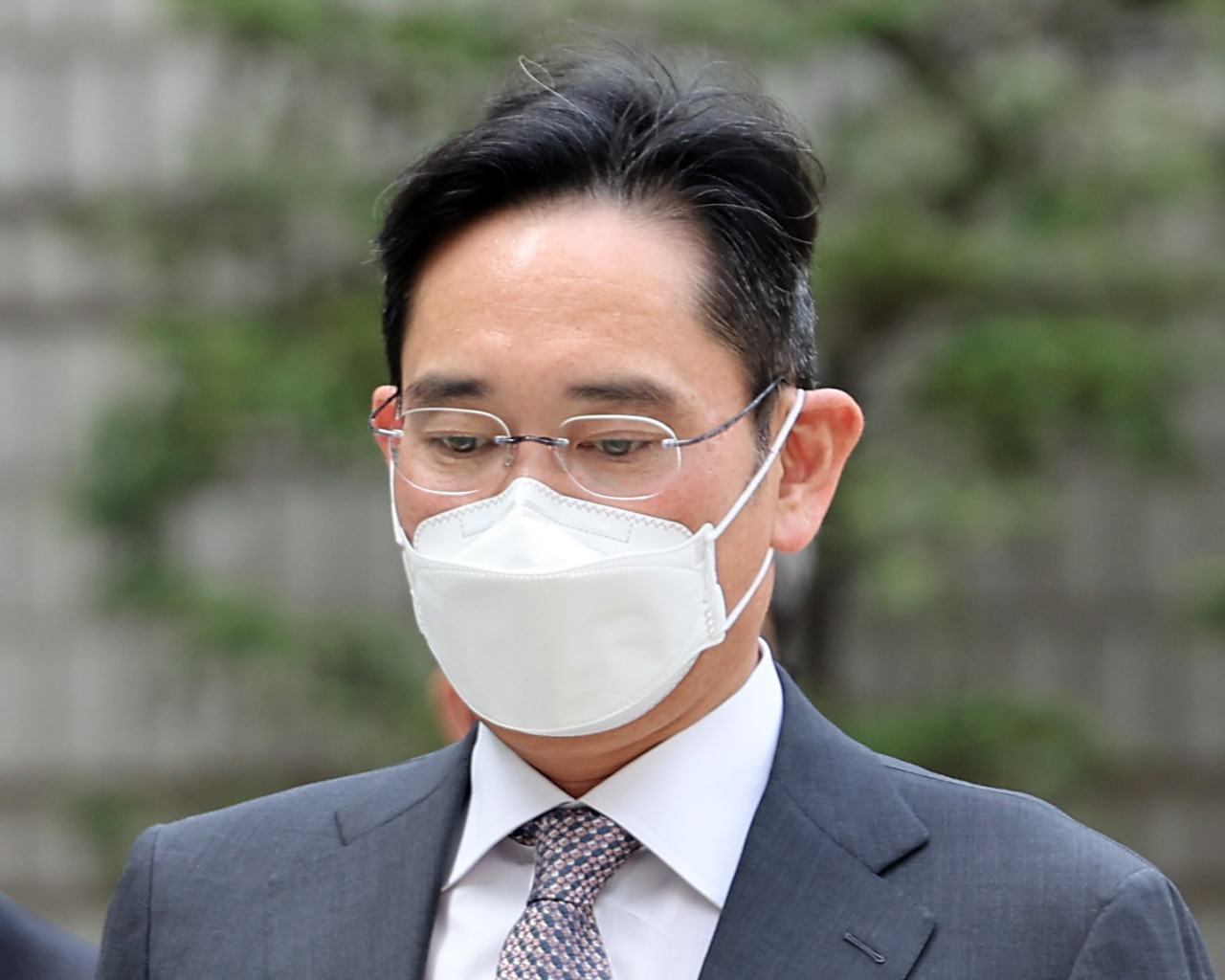 In this photo taken Thursday, Samsung Vice Chairman Lee Jae-yong attends a trial over his alleged influence over the Samsung merger case in 2015. (Yonhap)
Five South Korean lobby groups on Monday called for a presidential pardon to be issued to Samsung Vice Chairman Lee Jae-yong, the de facto leader of the family-owned electronics giant, with businesses saying the leadership void is taking a toll on the group even after Lee was released from prison on parole last year.

The plea for Lee’s clemency was submitted to Cheong Wa Dae and the Justice Ministry, in hopes that it would make it onto the list of incumbent President Moon Jae-in’s last presidential pardons. The announcement falls on Buddha’s birthday in May, just before Moon’s term concludes May 9.

The nation‘s biggest lobby group, the Federation of Korean Industries, did not take part in the joint statement.

A presidential pardon is the only legitimate way that would allow Lee to return to office. Under the Act on the Aggravated Punishment of Specific Economic Crimes, those convicted of a financial crime involving at least 500 million won ($400,000) are subject to restrictions from returning to the workplace immediately.

In Lee’s case, the 53-year-old successor is not eligible to return until 2027, as he is subject to a five-year ban imposed by the Justice Ministry effective after his jail term ends in July. Lee, who has been on parole since August 2021, was convicted of offering a combined 8.6 billion won in bribes to previous President Park Geun-hye in exchange for favors regarding a controversial merger case between Samsung C&T and Cheil Industries in 2015 -- a move that laid the foundation for Lee‘s stronger grip over Korea’s largest business group.

With Lee’s absence in the office, Samsung has largely kept a low profile in moving forward with major investments, which could have allowed Samsung to navigate external uncertainties in its key businesses including semiconductor chips, business lobbies said.

Even if Lee is pardoned during Moon‘s term, he is unlikely to steer clear of legal risks, as he is currently on trial over his alleged influence over the controversial merger of key affiliates into the group‘s de facto holding company.

Along with Lee, the five groups representing business circles in Korea also called on Moon to pardon Shin Dong-bin, who chairs Korean-Japanese business group Lotte. Shin received a suspended sentence on charges of 7 billion won in bribes to Park, who was impeached in 2017 and received a presidential pardon earlier this year from Moon.