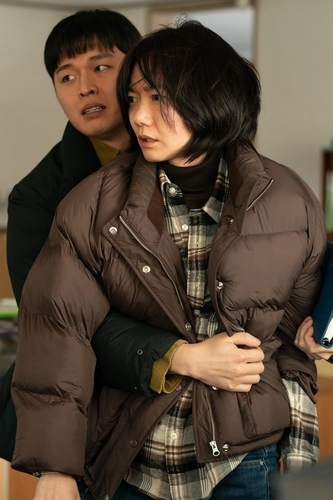 ”Next Sohee“ directed by Jung July (Twin Plus Partners)
“Next Sohee,” starring Bae Doo-na, will close Critics’ Week, a sidebar event dedicated to showing directors’ first and second films alongside the Cannes Film Festival, from May 18 to 26.

“I am grateful to screen the film, in which all the staff and actors worked together last winter, on a splendid spring day. We are proud to introduce our precious actors to audiences around the world,” the film’s director Jung July said in a statement.

“From the moment I first read the script for ‘Next Sohee,’ I was convinced that it was a film that can resonate (with people) around the world, so I am so happy as an actor that we are screening the film for the first time at such an honorable place,” Bae said.

The film is the second that director Jung and Bae worked on together, following 2014’s “A Girl at My Door,” which was invited to screen at the Cannes Film Festival.

In Jung’s film, So-Hee is a high school student working at a call center. One day, detective Yoo-jin (Bae) becomes suspicious of an incident that unfolds at the call center.

A total of 11 Korean films, including “Christmas in August” directed by Hur Jin-ho, “Happy End” directed by Jung Ji-woo and “Bedevilled” directed by Jang Cheol-soo, have been screened at Critics’ Week, an event that began in 1962.

“Next Sohee” is the first Korean film to be selected as a closing film.

Meanwhile, Busan International Film Festival’s chief program director Huh Moon-yung was appointed as one of the jury members for this year’s Critics’ Week.