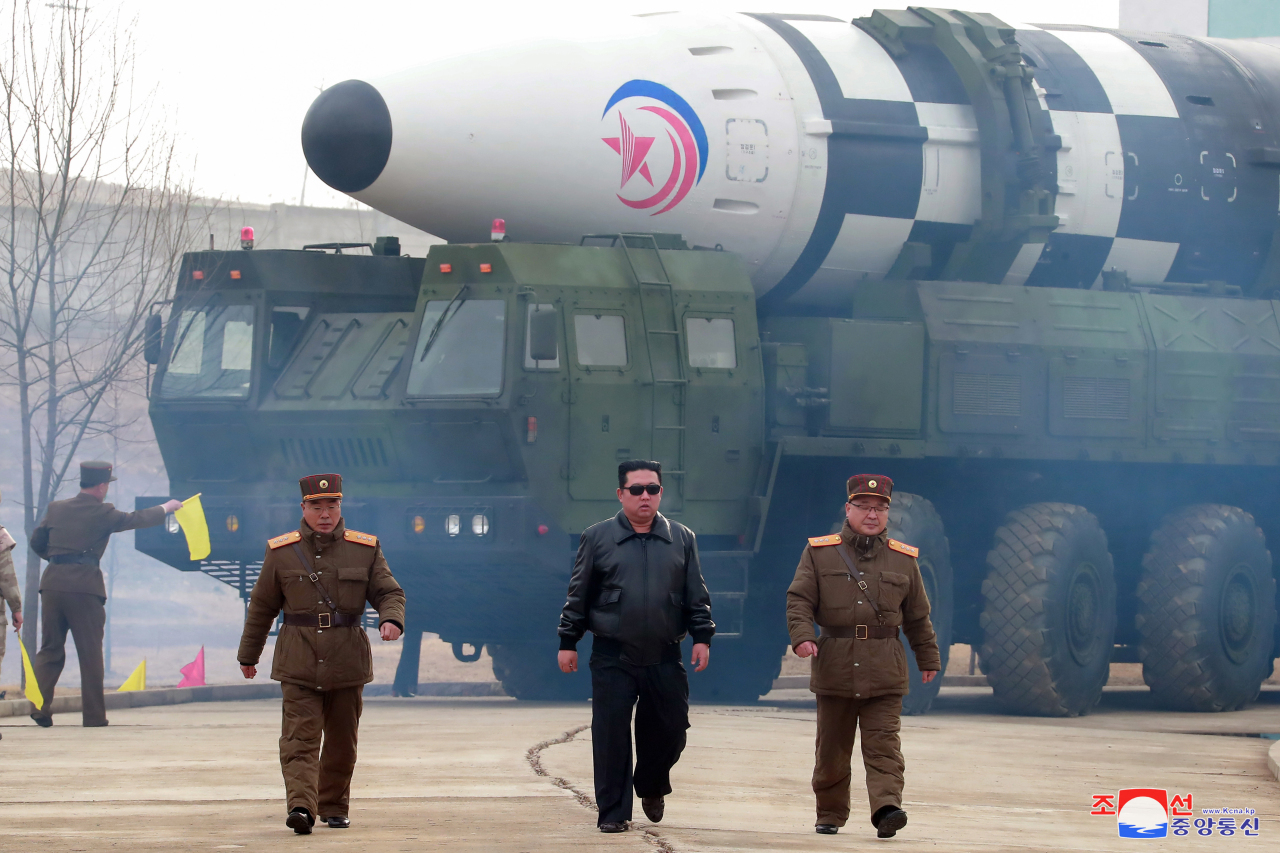 North Korean leader Kim Jong-un (center), accompanied by Jang Chang-ha (left), chief of the North`s Academy of National Defense, and Kim Jong-sik, the deputy director of the Munitions Industry Department, visits Pyongyang International Airport on Thursday to inspect the launch of a Hwasong-17 ICBM. (KCNA-Yonhap)
North Korea confirmed Friday that it test-fired a new type of intercontinental ballistic missile the previous day under the order of leader Kim Jong-un, who vowed to boost its nuclear deterrent and prepare for a “long-standing confrontation” with the US.

Thursday’s test was the first full ICBM test by the reclusive regime since 2017, marking the end to the regime’s self-imposed moratorium on testing long-range missiles. The missile, known as Hwasong-17, flew higher and longer than any of the regime’s previous tests.

It traveled a maximum altitude of 6,248 kilometers and a distance of 1,090 kilometers before “accurately hitting the pre-set area in open waters” of the East Sea, according to the Korean Central News Agency. The North’s previous Hwasong-15 ICBM reached an altitude of about 4,475 kilometers and flew about 950 kilometers when it was tested in November 2017.

Leader Kim personally oversaw the launch, with the KCNA publishing photos of Kim, wearing his signature black leather jacket, smiling and applauding to celebrate the test with military officials, and walking across the tarmac in front of a large missile on a Transporter Erector Launcher vehicle.

Kim said the new ICBM would “creditably perform its mission and duty as a powerful nuclear war deterrent” against the nuclear war threats and challenges against the country, according to the KCNA.

“The new strategic weapon of the DPRK would make the whole world clearly aware of the power of our strategic armed forces once again,” Kim was quoted as saying. DPRK stands for the North’s official name, the Democratic People’s Republic of Korea.

“He stressed that our national defense forces would possess formidable military and technical capabilities unperturbed by any military threat and blackmail and keep themselves fully ready for long-standing confrontation with the US imperialists,” it said.

Thursday’s weapons launch drew condemnation from the US, Japan and South Korea, as it is seen as major escalation by the North. The regime’s resumption of banned ICBM test for the first time since 2017 presents major headache for US President Joe Biden who is fixated on Russia’s invasion of Ukraine, as well as a challenge to South Korea’s incoming Yoon Suk-yeol administration.

President-elect Yoon on Friday warned Pyongyang that it will gain nothing from provocations and that Seoul will safeguard freedom and peace by building a stronger security posture.

Following the launch, the US imposed fresh sanctions on five entities based in Russia and North Korea on Thursday, accused of “transferring sensitive items to North Korea’s missile program,” according to the State Department.

“These measures are part of our ongoing efforts to impede the DPRK’s ability to advance its missile program and they highlight the negative role Russia plays on the world stage as a proliferator to programs of concern,” State Department spokesperson Ned Price said in a press release.

The UN Security Council is set to hold a public meeting on the North’s missile launches on Friday in New York. The latest session was requested by six countries, including the US, Britain and France.

South Korea plans to join the meeting as well as a directly interested party, although it is not a member of the council.

All eyes are on whether the UNSC could adopt a resolution or issue a joint statement. But observers say condemnation or fresh sanctions could be difficult, as Russia and China, which are the North’s close allies, could refuse the measure.

The UNSC held emergency meetings for the recent tests by the reclusive regime, but all had failed to take a joint action, on Russia and China’s opposition.

North Korea has conducted 13 rounds of weapons test this year, an unprecedented frequency that indicates the regime’s determination to bolster its arsenal while diplomacy with Washington remains stalled.