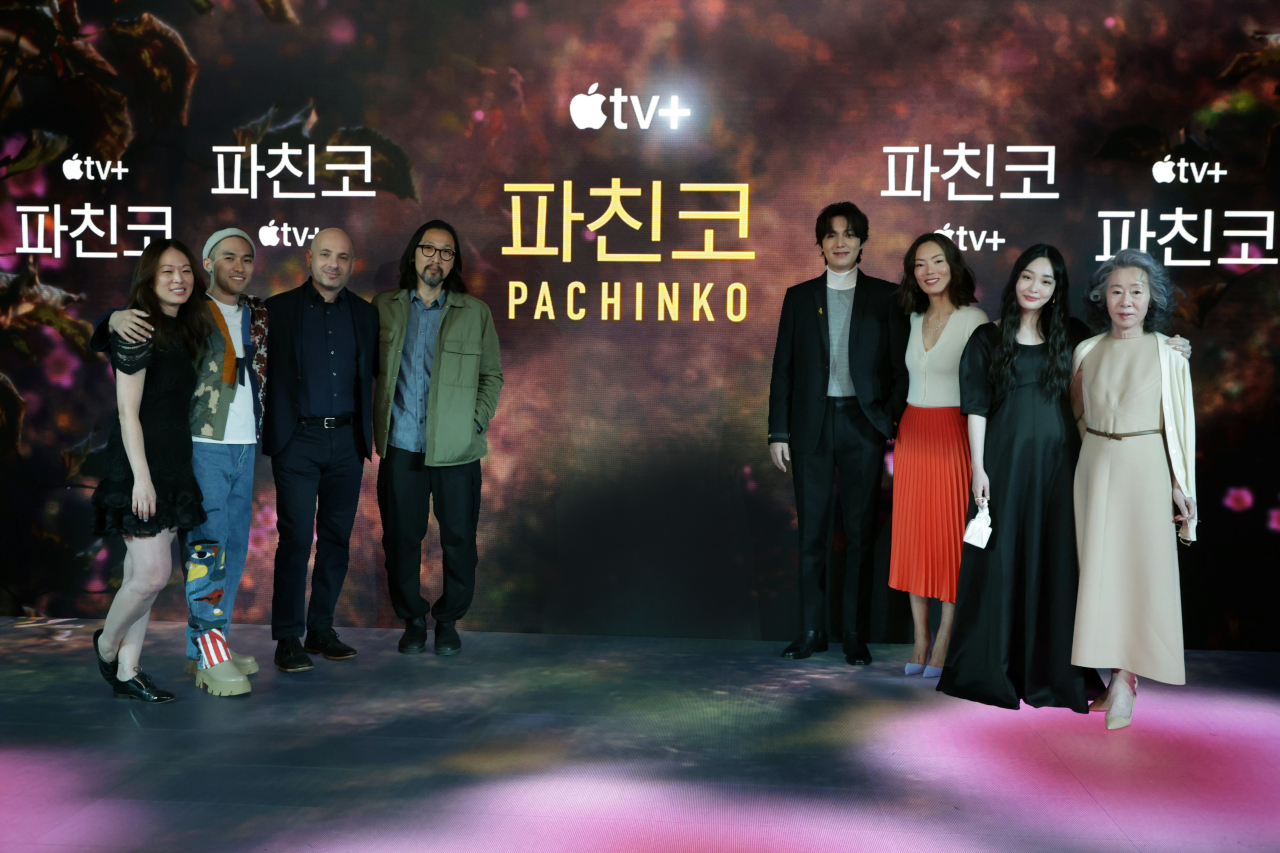 “I think this story is specific to Korean history but also deeply universal,” Kogonada said during an online event with Korean media from Los Angeles on Friday. “Even today, we know that people are being displaced, and families are having to make choices on how to survive. And this is a common story throughout history. So we knew that this would be a story for everyone because it‘s an ongoing quest for perseverance and endurance as a family.”

A scene from Apple TV+ series “Pachinko” (Apple TV+)
Based on the novel by Korean American author Lee Min-jin, “Pachinko” chronicles the hopes and dreams of a Korean immigrant family across four generations. The show center around the life of Sunja, a woman born to a poor family in Busan in the early 1900s who had to move to Japan during the Japanese colonial period.

The eight-part series’ screenwriter Soo Hugh also added that she wrote the script intending to deliver emotion that audiences can resonate with like love and maternal love.

“We never wanted the show to be a history book,” Hugh said.

Korean star actor Lee Min-ho, who played Hansu, a Zainichi Korean merchant who falls in love with young Sunja in the TV series, also sees that the new drama has elements that people from all around the globe can resonate with.

“This story will impress all people regardless of their nationality and language,” Lee said. “I hope this show will resonate with many people.”

During the press event, Oscar-winning actor Youn Yuh-jung, who plays the older Sunja in “Pachinko,” said that she had some worries about bringing a 490-page novel to life on a small screen.

“I was worried because the drama had so many flashbacks. In the novel, the events can take place chronologically but in the show, it goes back and forth,” Youn said.

A scene from Apple TV+ series “Pachinko” (Apple TV+)
The Korean veteran actress said her worries disappeared when she watched the final version of the drama.

“They all say Apple, but I don’t care apple or pear,” Youn joked. “But when I watched it, the cinematography was really good.”

She also went on and talked about Kim Min-ha, who played Sunja in her early twenties.

“I also had worries about young Sunja because she does not have much acting experience. I am old so I worry about all sorts of things,” she said. “She (Kim) appears from the second episode and she did a great performance. I gave her advice to fix her way of walking and a few other minor things but I really enjoyed her performance.”

The 74-year-old actor also added that she learned about Zainichi people in Japan, who are ethnic Koreans that moved to Japan mostly during the early 1900s before the Korean Peninsula was split into South and North at the end of World War II, through the show.

“I didn’t know about the life that they lived,” Youn said. “They are people that the Korean government did not take care of after the country became independent. I wanted to portrait their life properly.”

She added that it would be nice if Korean audiences can also learn about their lives through the show.

The first three episodes of “Pachinko” will premiere next Friday on Apple TV+. The remaining five episodes will be released one by one every subsequent Friday.