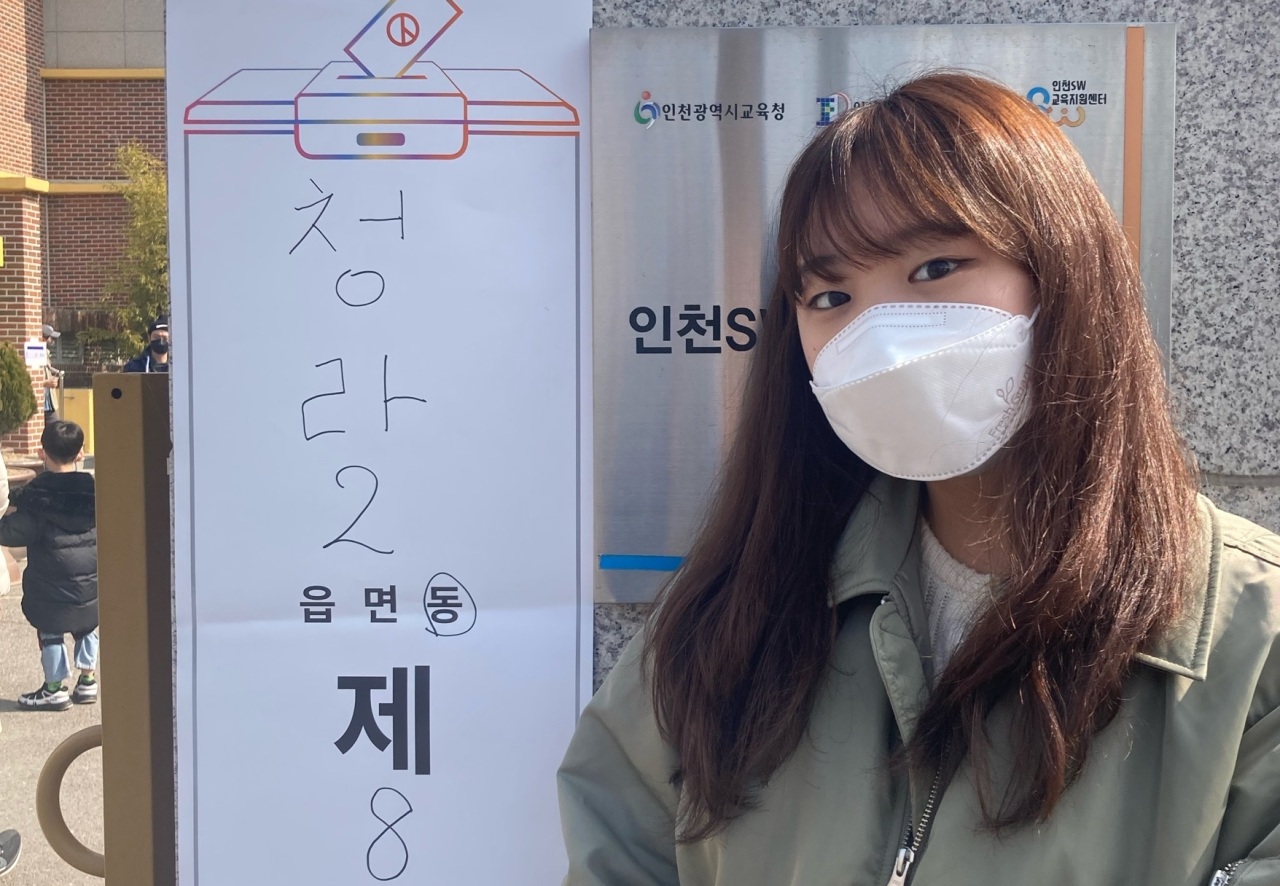 Cho Hyeon-seo, 18, poses in front of a polling station sign in Incheon on Wednesday. (On courtesy of Cho)
Kim Ji-su, who turned 18 in January, cast her first ballot in a presidential election on Wednesday with a sense of excitement.

“Adults think we are too young (to vote), but we are also citizens of this country. I am glad that I can vote to choose the president who will lead the country for the next five years,” Kim, a senior at Munjeong High School in Seoul, told The Korea Herald.

This year’s presidential election marked a milestone in Korean politics, as the first time in history with 18-year-olds – legally minors under Korean law - voting to choose the country’s next president, after the National Assembly passed an amendment to lower the voting age to 18 in December 2019. Those born before March 10, 2004 are eligible to vote.

According to the National Election Commission, the number of voters between 18 and 19 years old is 980,000, making up about 2.2 percent of the total electorate of 44.19 million.

Seo Ye-rim, who cast her ballot in the early voting period on Saturday, said the election felt like “a rite of passage” to becoming an adult.

“People usually say you are an adult when you can start drinking legally. But it was actually the moment I cast my ballot that I felt like I became part of society,” said Seo, who turned 18 in August. She graduated from Ogeum High School in February and has just started university.

But, excitement and a sense of growing up is not all that younger voters took away from participating in the election. The cohort is also serious about choosing the country’s next leader.

For Seo, the candidates’ pledges related to the pandemic recovery, and also financial support for those running their own businesses were key factors she looked into, because her father is self-employed.

“From the news, I also saw that prices are increasing quickly, and I want the next president to be able to stabilize it,” Seo said. 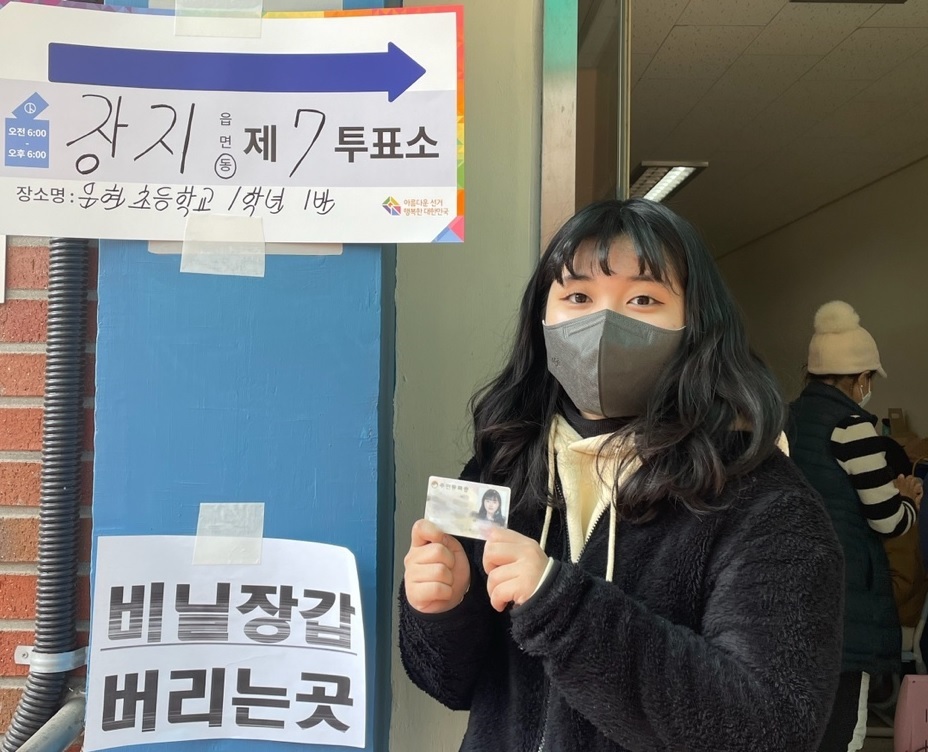 Kim Ji-su, 18, holds up her ID card and poses in front of a polling station sign in Songpa-gu, Seoul on Wednesday. (On the courtesy of Kim)
Kim Zi-won, 18, said that for her, the legitimate use of presidential authority is the most important factor in deciding who she was going to vote for, as she was greatly disappointed by power abuse scandals involving former presidents.

“Trust has been lost from the misdeeds of the former presidents. I believe the president should not abuse the many authorities given to them for their selfish interest. The power should only be used rightfully for the people,” Kim said.

Pointing out that many pledges laid out by the candidates are focused on the needs of the established, and older people, Cho Hyeon-seo said she wants to see more policies that can support the youth and guarantee diversity.

“I also want to see the candidates care about diversity in society. No one should be discriminated against for who they are. Also, I want to see a leader who can resolve social conflicts, like the gender dispute,” Cho added.

Another area where the interests of 18-year-olds overlapped was the presidential hopefuls’ pledges on Korea’s diplomacy, as they raised concerns about the crisis in Ukraine.

“It is alarming to see a war breaking out between Ukraine and Russia. So I also had to consider the diplomatic policies when I was choosing among the candidates,” Seo Ye-rim said.

Kim Ji-su also said she wants a decisive leader who can protect the country’s sovereignty.

“I think there have been cases where Korea’s diplomacy was dispirited (by other countries). I want our next president to be able to Korea’s own voice in the world,” Kim said. 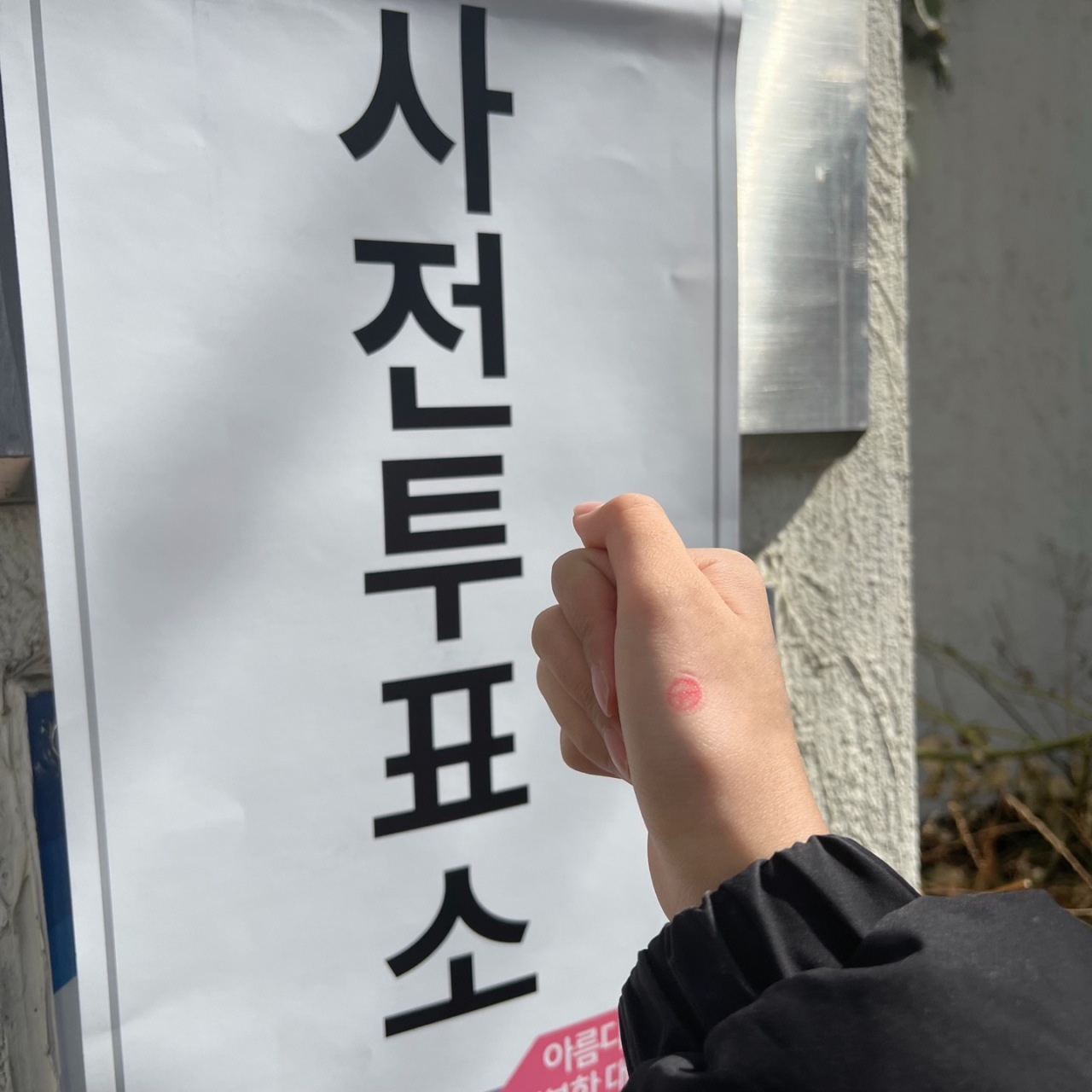 A proof shot provided by Seo Ye-rim, an 18-year-old voter who cast her ballot in Seoul on Saturday. (On the courtesy of Seo)
Call for proper education

In recent years, the political circle has made great changes to open its doors to students.

Since the National Assembly passed the amendment to change the voting age, lawmakers in 2021 also lowered the age of candidacy for parliamentary and local elections from 25 to 18.

This means politicians as young as 18 can throw their hats in the ring for local elections slated for June.

While barriers to entry are going down, politics has often been an area laid aside by more urgent matters in schools, such as getting good scores for the college entrance exam.

To many in education, it has also become an uncomfortable subject to handle, as there are concerns that teachers may infuse biased ideas to young students, who are still forming their own ideas and political beliefs.

But the 18-year-old voters that The Korea Herald spoke to said they want schools to come up with better ways to educate students on politics, so that they can be better educated voters.

“My school does not have politics in its curriculum, so I had no idea how an election was held. I believe there are many voters who are willing to vote, but cannot even distinguish between conservatism and liberalism in politics, because they were never taught,” Seo Ye-rim said.

She said she looked up on YouTube and through the printed pamphlets sent to her house from the National Election Commission to learn about the candidates and their pledges.

Kim Ji-su’s school distributed explanatory notes on the process of the election, but Kim believes it was not enough to help students really understand politics.

“I chose a politics class for my elective subject and it helped me a lot in understanding the candidates and their policies. But most others do not choose it as an elective class, which means they received no education on politics, at least from school,” Kim added.

A high school teacher in Seoul, who asked to go by the pseudonym Lee Yu-mi, agreed that schools are not doing enough to educate students on politics. Lee feels like the topic of politics is taboo in the classroom.

“(Talking about politics in school) may be likened to sex education. The current education system does not include political education, and lack of discussion is misleading the students obtain information from online communities often filled with incendiary content,” Lee told The Korea Herald.

Contributing to the negative sentiment towards the subject is a law that prevents teachers from speaking about politics.

“More discussion will be needed to find a way for schools to provide proper education on politics. Still, I am glad that students who are 18 are given the right to vote. From my experience of teaching, I am sure that these students are capable of making their own judgments.”