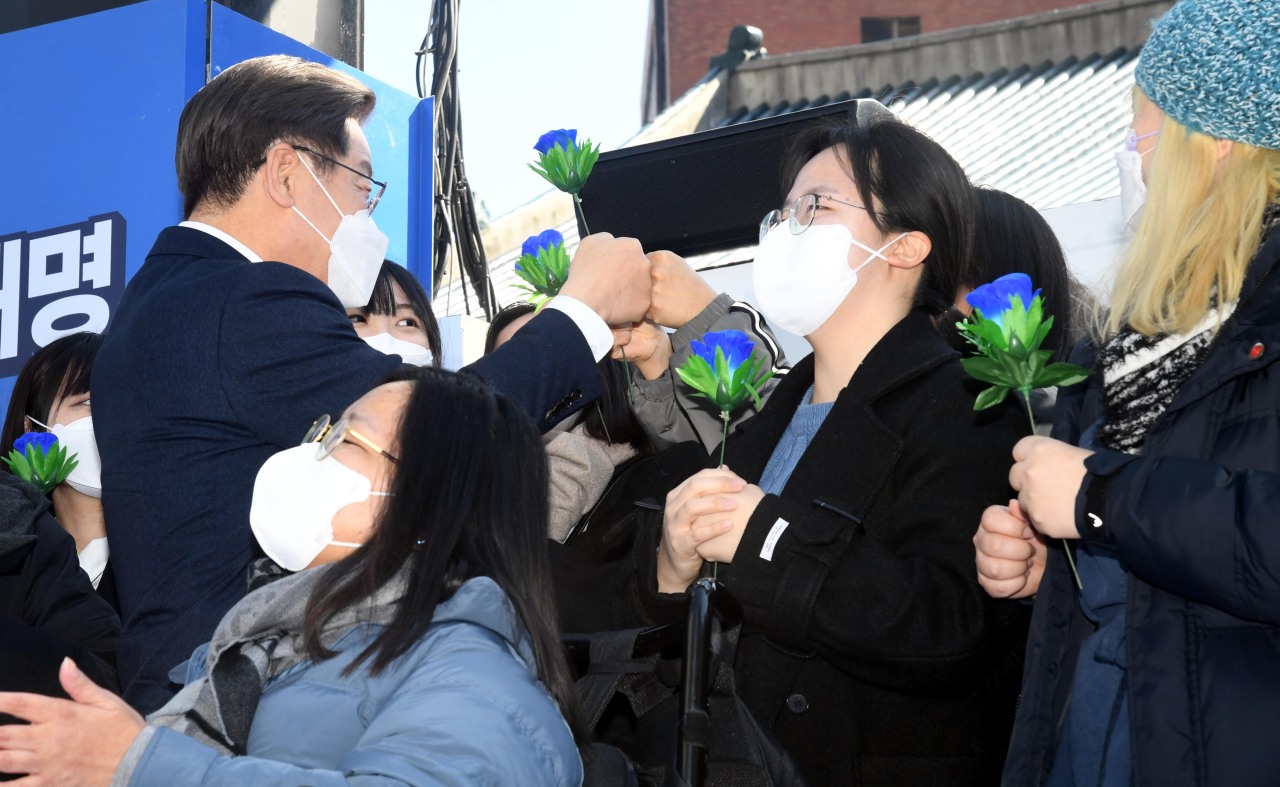 Presidential candidate Lee Jae-myung of the Democratic Party of Korea greets his supporters at a rally in Seoul on Thursday. (The National Assembly‘s photo press corps.)
“What do you think is feminism?”

This question, put to conservative candidate Yoon Suk-yeol by his rival Lee Jae-myung of the Democratic Party of Korea, was one of the highlights of the final TV debate on Wednesday.

“I think feminism is a kind of humanism, respecting women as human,” Yoon answered as Lee pushed back, “It’s a movement that accepts the gender discrimination and inequality that women face as reality and seeks to tackle them.”

Their exchange on the definition of feminism made headlines in local media and was followed by debate among ordinary voters as to what to make of the two frontrunners’ answers.

Such is the current political climate. The two leading candidates -- both men who were born in the 60s -- faced criticism for pandering to young men voters for months during this election cycle. But as Election Day approaches and the race is locked in a dead heat, they are now trying to court young women voters - the biggest swing voting bloc in this election, according to multiple polls.

On social media, both candidates have refreshed their appeal to women.

“I, Lee Jae-myung, will tackle the systematic gender discrimination in society and provide a better life for women as the ‘women safety president,’” he said in a Facebook post on Thursday.

Yoon also wrote, “A Republic of Korea that is safe for women” and declared a “war on sex crimes.” 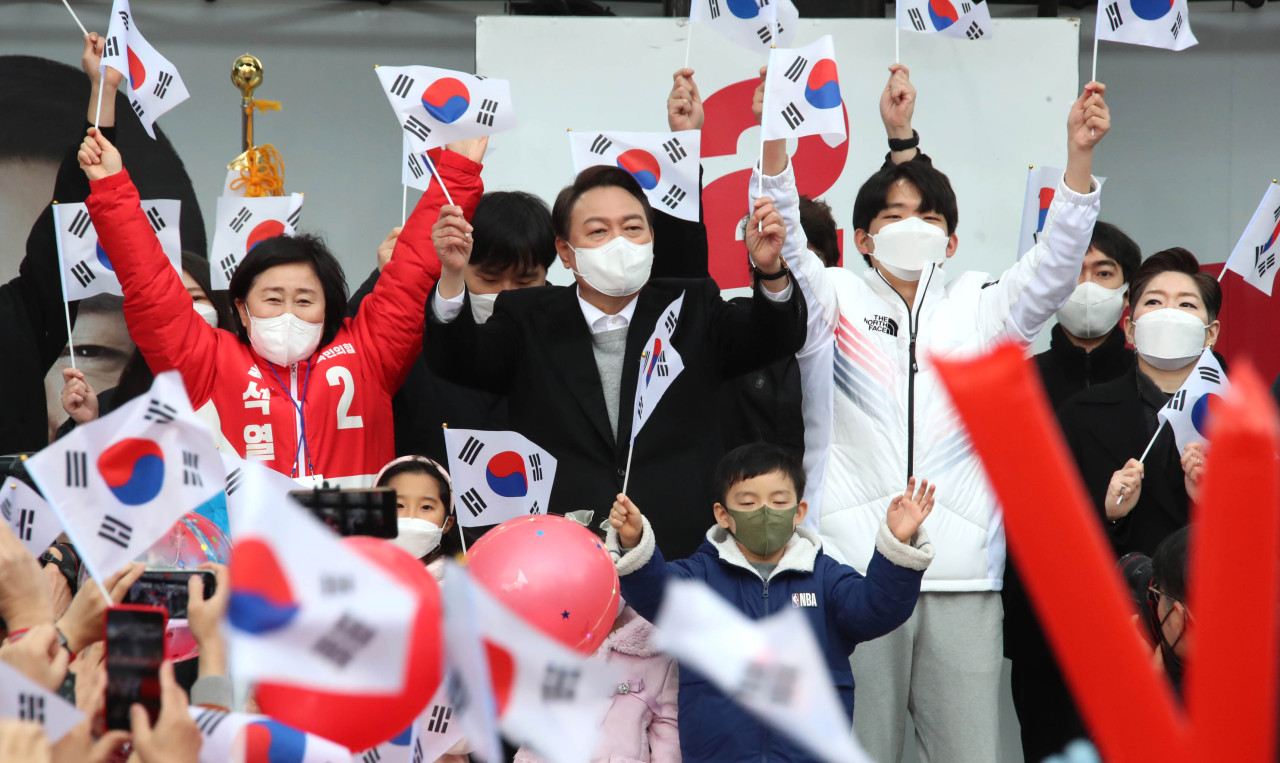 Presidential candidate Yoon Suk-yeol of the People Power Party speaks at a canvassing event on Thursday in Sejong. (Yonhap)
Compared to Yoon, who has promised on multiple occasions he would abolish the Gender Equality Ministry when elected, Lee appears to have a polling advantage when it comes to this particular demographic group.

On Thursday, Lee’s election campaign team held a rally in Seoul for women featuring speakers including Park Ji-hyun, the vice chairwoman of Democratic Party of Korea’s women’s committee. Park was part of a group that helped expose the “Nth Room” case - a criminal case involving blackmail and cybersex trafficking via the Telegram app that had over 1,000 victims.

Though young female voters were neglected at the beginning of the campaign, things have changed, said Lim Yoo-jin, a 39-year-old woman at the event.

“It’s true that as Lee Jun-seok won the leadership of the main conservative People Power Party who has strong support from young men, his base received more attention at the beginning.”

But she said women voters have now emerged as the “casting vote.”

“With Ahn Cheol-soo merging his bid with Yoon, I think, women in their 20s and 30s think they have become the casting vote,” she said.

According to a survey by Realmeter commissioned by OhmyNews released on Thursday, 8.5 percent of women aged between 18 and 29 said they had no favored candidate, while another 8.5 just said “don’t know.” More importantly, 16 percent said they would vote for Ahn, who withdrew from the race to endorse Yoon, late Thursday. This means up to 33 percent could be swing votes.

Among men however, Yoon led Lee by over 16 percent, with the candidates garnering 46.8 percent and 30.1 percent among the group, respectively.

Overall, Yoon was in the lead among under 30, as well as across all age groups.

Kim Yoon-seon, a 40-year-old woman who is also a Lee supporter, said she feels men in their 20s were “used.”

“A lot of young women around me don’t look at what policy politicians have only for women but what they have for young people in altogether, without differentiating men and women.

Both Yoon and Lee have made campaign pledges largely seen as pandering to male voters. But it was Yoon who really clicked with the so-called “angry young men,” by promising on multiple occasions he would abolish the Gender Equality Ministry when elected and by saying there is “no structural discrimination” against women in Korean society.

“Various groups should be represented, yet representation has been disproportionately skewed. Women have been erased during this election,” said Justice Party Rep. Jang Hye-young during an interview with The Korea Herald in January. “It’s not very democratic.”

But some surveys have indicated that gender equality and feminism may not be high on the agenda of all women. The perception of the Gender Equality Ministry is also contested among women.

One survey conducted by Embrain Public at the request of Munhwa Ilbo in October, 54.8 percent of women in their 20s and 54.7 percent of those in their 30s are against abolishing the ministry. 45.2 percent and 45.3 percent of each age group agreed however, respectively.

Both men in their 20s and 30s were strongly against the government department with over 90 percent saying it should be abolished.

When it comes to feminism, 90 percent of men in their 20s held a negative view while 57.7 percent of women in the same group held a positive view, the survey by the local daily newspaper showed.