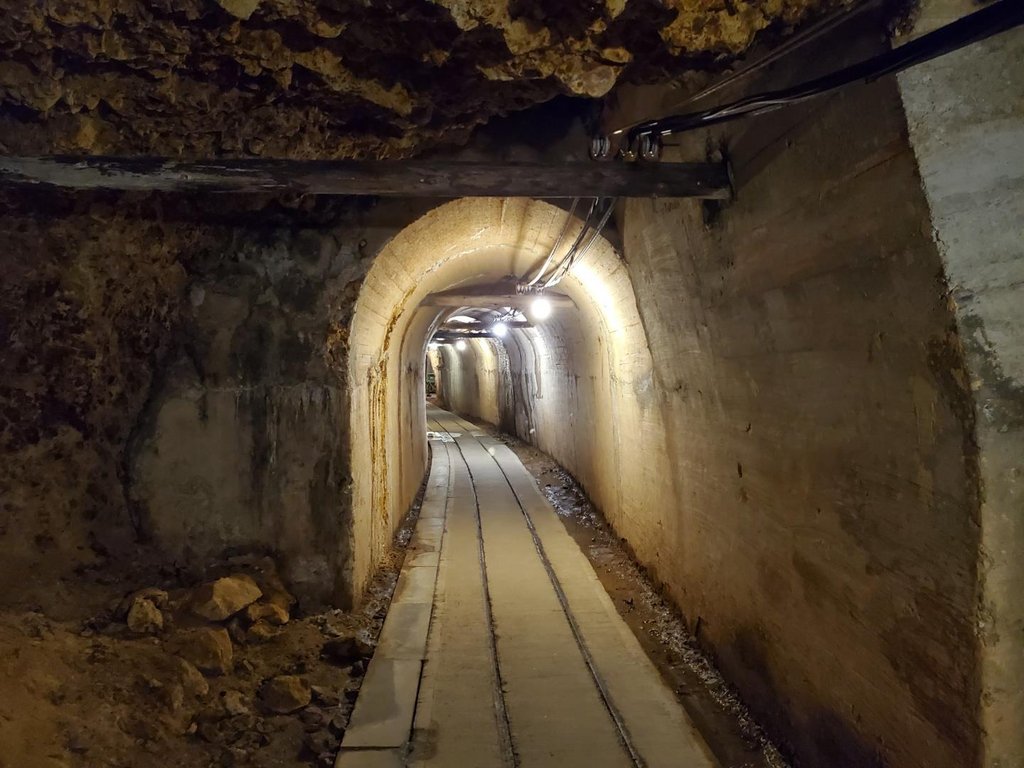 Tracks inside the Sado mine in Niigata Prefecture, Japan. (Yonhap)
Japan’s decision to recommend a disused gold and silver mine as a UNESCO World Heritage site has drawn backlash in South Korea, with observers accusing Tokyo of trying to distort history by nominating the mine, which was the site of forced labor in the early 20th century.

Located on Sado Island in Niigata prefecture, the mine highlights outstanding mining technology development before and after the industrialization, becoming one of the world’s largest sources of gold in the 17th century, according to the prefecture. Japanese Prime Minister Fumio Kishida touted Sado as valuable in the country’s industrial history, when announcing the decision to nominate the 400-year-old mine on Jan. 28.

But the mine is one of Japan’s many industrial sites that bore the scars of the country’s brutal colonial rule of the Korean Peninsula from 1910 to 1945. At least 1,500 Koreans are said to have been coerced to work at the mine during this time, according to historical documents.

Tokyo, however, has left out mention of the forced mobilization in its recommendation to the UNESCO. Instead, it specifically designated the time frame of the mine’s activities to the Edo period (1603-1867), skipping the period of the Japanese occupation of Korea. Observers have described this as an apparent attempt to whitewash history and cover up the more harrowing aspects of its past.

“This is not just about designating the site as a cultural heritage,” Jung Hye-kyung, a researcher at the Study Group of Japanese Forced Mobilization and Peace, told The Korea Herald. “Japan is using the UNESCO listing to distort history at the global level, by focusing on only a part of the history and not the whole picture that includes the use of forced laborers.”

Hisamoto Kobayashi, an official at the Network for Research on Forced Labor Mobilization, echoed a similar stance in a report released at a recent forum organized by the Northeast Asian History Foundation, accusing Japan of “historical revisionism” and politicizing.

“(The Japanese government) is distorting the residents’ hope of making Sado a world heritage site, using it for politics by calling it a ‘historic war,’ and has tarnished it as a diplomatic problem,” said Kobayashi.

This is not the first time Japan has snipped out a part of its colonial history from its site on the UNESCO list. In 2015, when Tokyo registered 23 sites of the Meiji Industrial Revolution to the World Heritage, Seoul initially opposed the designation as Koreans were coerced into labor at seven of those facilities, including the notorious Hashima Island, better known as the Battleship Island here.

Eventually, Seoul agreed to the inscription after Tokyo pledged to take measures to allow an understanding that Koreans and others were “brought against their will and forced to work under harsh conditions.”

This included installing an information center to commemorate victims of forced labor and providing a full account of the sites’ history. But the new center, which opened in 2020, only highlighted Japan’s industrial accomplishments and omitted the fact that Koreans had worked on the island.

Kang Dong-jin, a professor at Kyungsung University, said he sees a parallel between the Sado mine listing bid and Japan’s 2015 Meiji-era sites designation.

“Many people had opposed the Sado mine nomination based on scientific and ethical point of view,” said Kang. “But Japan decided to go forward with the listing using the similar method it used for the Meiji-era sites. This could be only explained that there must be a political motive behind it.”

Kishida had initially been reluctant to nominate the Sado mine this time and was considering delaying it, as not to further exacerbate already strained relations with Seoul, especially before the March 9 presidential election.

But in a sudden change of heart, Kishida decided to push for the recommendation, apparently caving into growing pressure from hard-line conservatives of the ruling Liberal Democratic Party, especially former Prime Minister Shinzo Abe, who reportedly accused Kishida of being weak for yielding to Seoul’s demand.

Abe said the recommendation could not be avoided as South Korea waged a “history war” on Japan, and called to “fight back with facts.” Sanae Takaichi, policy chief of the LDP and Abe’s protege, said the Sado issue concerned the “dignity of the nation.”

Analysts say Kishida, who is seen as relatively dovish in the LDP, had to push for the nomination as he could not risk political ramifications ahead of the parliament’s upper house election in July.

“From the perspective of Japan’s domestic politics, the push for the Sado mine listing, could be used as Japan’s feat on the international stage, and also consolidate the conservatives for the election,” said Choi Eun-mi, a Japan expert at the Asan Institute for Policy Studies, adding that the Kishida administration will likely maintain its hard-line stance on Seoul until the July election.

The Sado mine is but the latest in a series of issues that bedevil already fraught relations between Tokyo and Seoul, due to disputes stemming from Japan’s colonial past, including the use of forced laborers and “comfort women” -- a euphemism for women who were forced to work at Japanese military brothels.

The Foreign Ministry here said it was “deplorable” that Tokyo is pushing for the listing, and called for an immediate retraction.

South Korean Foreign Minister Chung Eui-yong remained apart with his Japanese counterpart, Yoshimasa Hayashi, over the matter during their first-ever meeting in Hawaii earlier this month.

Chung voiced “deep regrets” and lodged protest against Tokyo’s Sado mine push, urging Japan to first fully implement the follow-up measures that it pledged when it listed the Meiji-era sites in 2015.

In turn, Hayashi said Seoul’s objection to the listing is “unacceptable and regrettable,” adding that Tokyo, however, is open to talks with Seoul over the issue.

The renewed bilateral spat over history raises concern that it could put a strain on Washington’s endeavor to cement three-way ties with its key Asian allies, in the face of an assertive China and nuclear-armed North Korea.

Earlier this month, Washington announced its Indo-Pacific strategy, putting tighter cooperation among allies and partners in the region as the key pillar, including trilateral relations with Seoul and Tokyo.

In the coming days, Washington could add pressure on the bickering neighbors to bury the hatchet and move forward, as the ongoing feud could distract from the region’s more pressing concerns.

US Secretary of State Antony Blinken said in Hawaii after the three-way meeting that Washington is committed to help Seoul and Tokyo “work through challenges in their relations.”

Following up on Japan’s nomination on Feb. 1, the UNESCO’s advisory body, the International Council on Monuments and Sites, or ICOMOS, will carry out on-site surveys of the complex in the fall and decide whether to recommend the complex for the inscription.

Based on the recommendation, the World Heritage Committee will then make the final decision at a meeting around June or July next year.

A majority of at least two-thirds of the World Heritage Committee members have to agree in order for the site to be officially inscribed. South Korea is not a member of the 21-country committee this round, while Japan is.

This means, Seoul has to muster diplomacy and get the member countries on its side if it wants to stop the listing. Observers say this could be a tough battle.

“It is hard to expect the outcome. Even if the ICOMOS defers the decision or decides to oppose the inscription, the World Heritage Committee can still vote at the meeting,” said Jung, the researcher. “Experts do say the Sado inscription is less likely considering sound judgement. But when politics enter the scene, we don’t know what will happen.”

She said South Korea needs to gear up for a “lobbying war” against Japan, who is a member of the committee and wields substantial power at the international organization as the second-largest contributor to UNESCO’s budget, after China.

As part of Seoul’s diplomatic push, Foreign Minister Chung is scheduled to meet with Audrey Azoulay, director general of UNESCO, on Tuesday in France, with the Sado mine issue expected to top the agenda.

Going forward, Jung called the need for Seoul’s systematic approach, by accumulating the related data, collecting testimony of the victims and nurturing more experts on preserving cultural heritage and history.

“South Korea has to come up with a consistent and long-term policy in regard to issues around Japan’s UNESCO push, and not regard it as a one-off issue,” said Jung. “Sado mine is not the last site that Japan will use to distort history. There are plenty more and Japan has been preparing for it for a long time.”

Meanwhile, there is another strategy that Seoul can utilize to its advantage, which is the new system the UNESCO adopted in 2021 for the organization’s separate program, Memory of the World Register. Under the new regulation, a candidate document will not gain approval if a concerned country raises an objection.

This very rule was requested by Japan, which objected China’s application for records related to the 1937 Nanjing Massacre -- the mass murder of Chinese civilians by Japanese troops -- to be recognized by the UNESCO’s Memory of the World program.

While the World Heritage program, which Sado is up for, doesn’t have a similar rule and does not require consensus among related countries, observers say Japan could be accused of “double standards” if it goes ahead despite Seoul’s opposition and without sufficient consultation.

“The rule cannot be applied equally for the World Heritage program, as it is for the Memory of the War program,” said Kang. “But considering both programs are related to UNESCO, there could be room for applying similar standards to the Sado mine.”

In response to a media inquiry by The Korea Herald, a UNESCO official said the body “never comments on ongoing proceedings.”

“It is necessary to wait for the World Heritage Committee to render its decision, which may be a favorable decision, an unfavorable decision or a request to the member state to rework the project to apply for registration again the following year,” the official said.