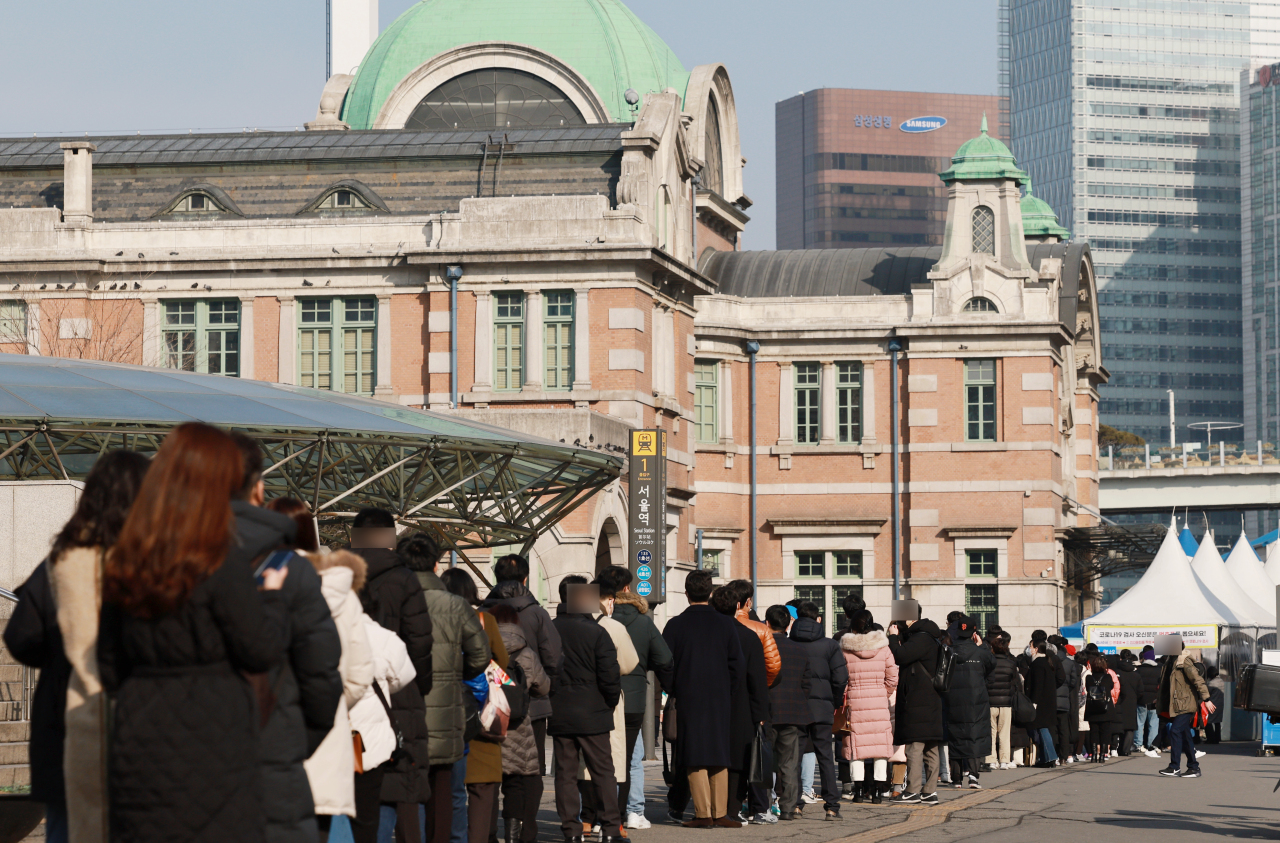 People line up outside a testing clinic near Seoul Station on Thursday. (Yonhap)
Health officials in South Korea say omicron is no cause for alarm, as the newly dominant variant smashes case records.

The country saw 14,518 cases on Thursday, replacing the record of 13,012 cases set the previous day, when the daily count rose into five digits for the first time.

Son Young-rae, the Ministry of Health and Welfare spokesperson, said Thursday that fears over omicron were unjustified and possibly disruptive.

“Omicron is only one-fifth as severe as delta. About half of omicron infections are symptomless,” he said.

“When people are overly afraid, the demand for testing and other medical services could soar unnecessarily, and that can disrupt our abilities to respond efficiently,” he told reporters in a closed-door briefing.

In a briefing held the previous day, Son urged people to “trust the science that health authorities provide, and don’t panic over the numbers.”

“Cases will continue to increase for the time being, but we believe that our response system can minimize the damages,” he said. He added that cases among older people were falling, and critical care hospitalizations have dropped to about a third of the levels seen in early December.

According to a government analysis Tuesday, omicron is twice as transmissible as delta but only about one-fifth as deadly. The fatality rate for omicron was analyzed to be 0.16 percent, while for delta it was 0.8 percent, the analysis said. Vaccines continued to protect against hospitalizations with omicron, although they were less effective at preventing infections.

Against this backdrop, Korea is switching to focused protection, also called the omicron response strategy, rather than sticking to the rigorous 3T model of “test, trace and treat,” the ministry spokesperson said.

“Social distancing comes with high socioeconomic costs. So far the course of the omicron wave, though it remains to be seen, does not warrant such a restrictive approach. Going back to social distancing will be a last measure,” he said.

Despite saying as recently as Tuesday that abandoning the present restrictions may be risky, the ministry announced that the new omicron-attuned strategy would be expanded all across the country starting Saturday. The quick reversal follows calls from President Moon Jae-in for a swift transition.

The ministry had previously said that an omicron-focused strategy that moved away from the 3T model would “compromise the abilities to detect and treat cases among people who aren’t a high priority, and weaken control over the spread.”

Under the new strategy, access to PCR testing, oral treatments and other resources will be primarily given to people deemed to be high priority. On who would qualify as high priority, Son said that the criteria is age 60 or over, expanded from the initially announced 65. People of other ages with vulnerabilities are not considered a priority at the moment.

Omicron was officially declared the dominant virus here on Monday. Sequenced positive samples from the week of Jan. 17-23 showed omicron represented over 50 percent of the cases.