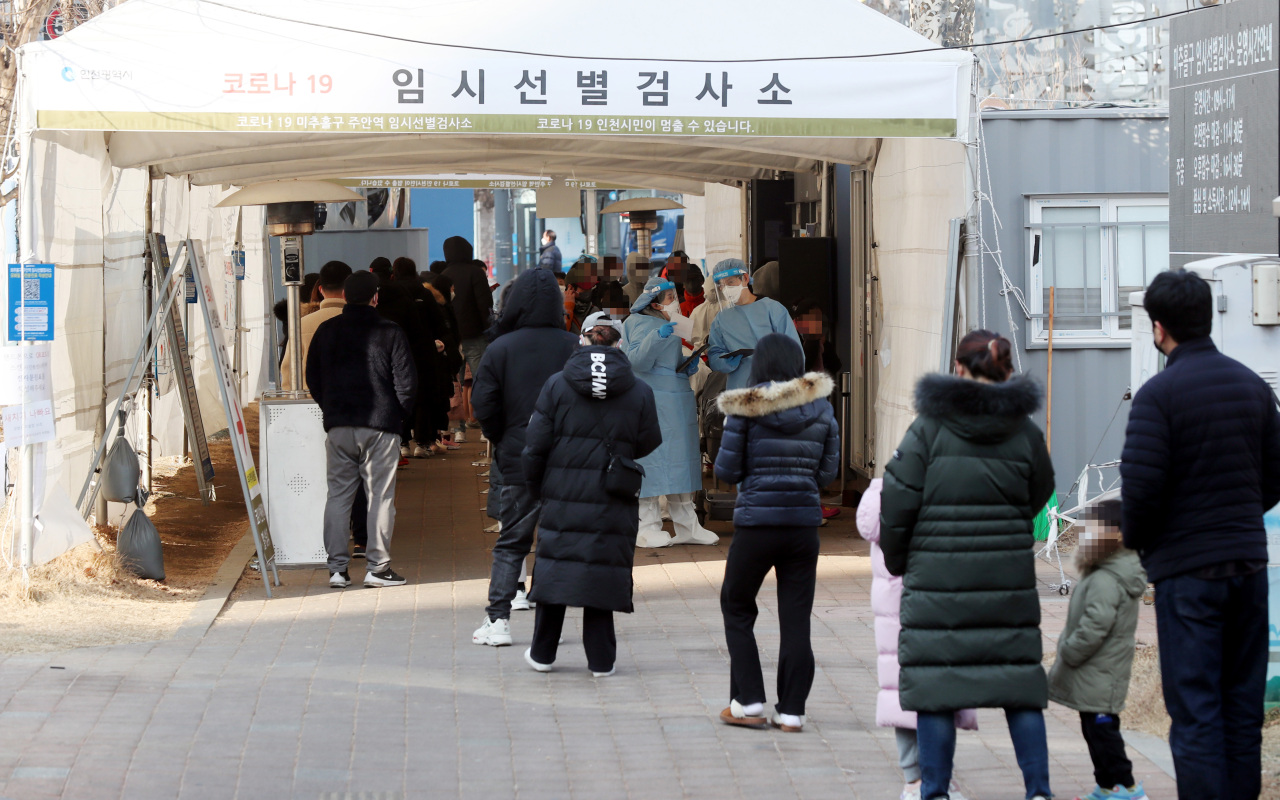 A long line of people waiting to take COVID-19 tests is formed at a temporary testing booth in front of a subway station in Incheon, 40 kilometers west of Seoul, on Thursday. (Yonhap)
South Korea's daily COVID-19 cases hit over 14,000 on Thursday, breaking the record for a third consecutive day as the highly contagious omicron variant spreads across the country at an unprecedented speed.

South Korea posted the first five-digit daily tally of 13,012 on Wednesday, following the previous record high of 8,570 on Tuesday. The per day counts have nearly quadrupled since early last week, when the figure had hovered around 3,800.

The number of critically ill COVID-19 patients was 350, down 35 from the previous day.

Under the regime, rapid antigen self-tests replace polymerase chain reaction tests at testing sites, except for those aged over 60 or high-risk groups. Local hospitals and clinics will administer diagnostic tests and treat patients starting Feb. 3.

The KDCA said the revised regime is designed to minimize critical cases and deaths, while preventing an overload and collapse of the medical system.

The system, currently being applied in parts of the country, will expand nationwide after the three-day Lunar New Year holiday running till Feb. 2.

The government ruled out reinforcing social distancing to rein in the omicron wave, citing relatively fewer numbers of serious cases and deaths.

It also noted the potential negative social impact if the distancing was further tightened.

"Distancing is a measure that incurs high socioeconomic costs," Sohn Young-rae, a senior health official, said. "We still need to look at the situation further, but we're not at a point where the rapid increase in infection cases is affecting the ratio of serious cases or the operation of the medical system."

Currently, private gatherings of more than six people are banned. Businesses are subject to a 9 p.m. curfew. This scheme is due to end on Feb. 6 and the government is set to decide the next phase of virus curbs.

Of the locally transmitted cases Thursday, Gyeonggi Province that surrounds Seoul reported 4,738 new COVID-19 cases, followed by Seoul with 3,385 and the western port city of Incheon at 1,010.

As of Thursday, 26.04 million people, or 50.7 percent of the country's 52 million population, had received booster shots, the KDCA said. The number of fully vaccinated people came to 43.90 million people, accounting for 85.6 percent. (Yonhap)