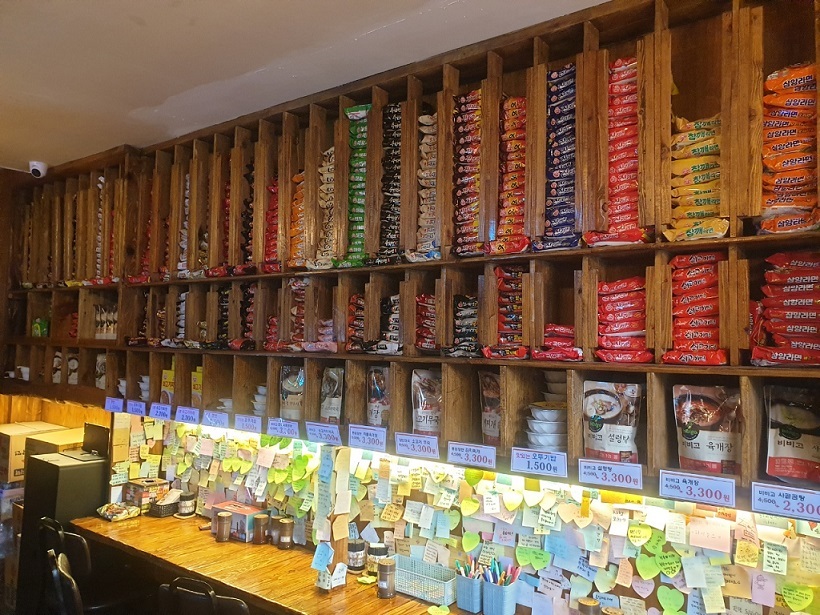 An unstaffed ramen convenience store near Jongno 3-ga Station is open 24 hours. A wall shelf is stacked with packaged instant noodle products of different brands. (Choi Jae-hee / The Korea Herald)
Packaged instant noodle products of different flavors, from spicy beef broth to stir-fried black bean sauce and kimchi soup, are stacked on a shelf covering about two-thirds of the store’s wall on the right. On the left, a row of automatic machines to pour hot water into paper cups and boil it at the touch of a button are ready to cook the noodles.

After buying a packet of ramen through a self-ordering kiosk, all you need to do is open the bag and put the dried noodles in the paper container together with the seasoning powder. Many of the seats face the wall, ideal for solo diners.

With just 2,500 to 3,000 won and a couple minutes’ wait, you get a steaming hot bowl of “ramyeon,” as the common instant noodle dish is known in Korea. 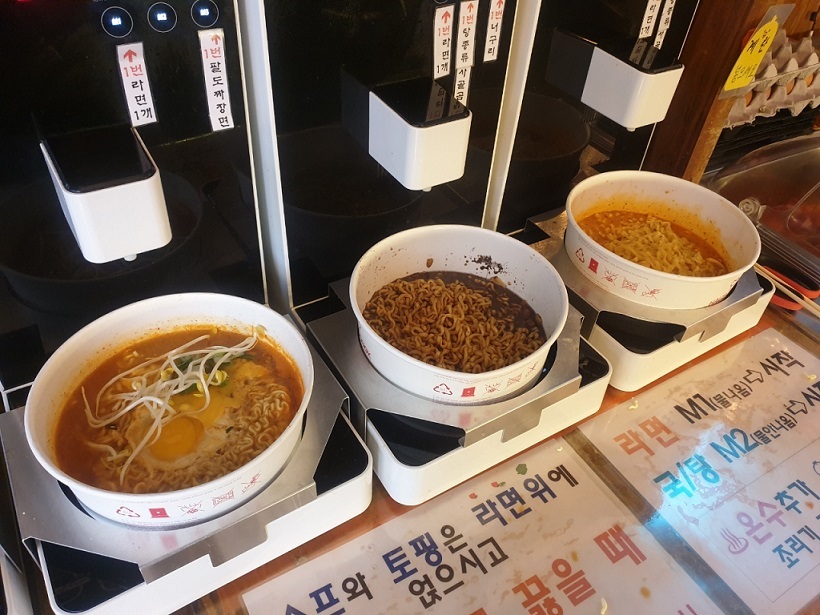 Instant noodles in three different paper containers are placed in specialized cooking machines. (Choi Jae-hee / The Korea Herald)
Having opened in February last year near Jongno 3-ga Station in Seoul, the store is among an emerging number of unstaffed convenience stores in Korea.

Boosted by the contactless trend amid the protracted COVID-19 pandemic, the small self-servicing shops have caught the eyes of Koreans, especially solo diners and some who still remain unvaccinated, as they find it harder to enter multiuse facilities including restaurants and cafes under the governmental vaccine pass mandate.

One solo diner surnamed Jeong at the Jongno 3-ga location said the place is suitable for solo diners working in a crowded city.

“I enjoy eating alone while reading webtoons. I don’t really want to make lunch plans with someone else amid the virus resurgence. But sometimes I feel embarrassed to eat alone as most of the restaurants near my office are packed with customers during lunch hour,” she said.

There were times when she felt restaurant owners or servers did not welcome her coming to eat alone.

“This self-service diner has a lot of single seats,” said the 32-year-old office worker at a medical devices company in central Seoul.

For some ramen lovers, the store is like a food lab, where they can experiment with new ways of enjoying the noodles, like mixing two or three different brands.

“Instant noodles are usually sold in bundles, so it’s difficult to have a wide variety of ramyeon at home. It’s nice that I can blend popular noodle labels at ramyeon convenience stores. My favorite combination is a mix of Nongshim‘s Chapaghetti and Neoguri, said Kang Ho-min, a 24-year-old student at Kyung Hee University.

While the convenience stores still require the minimum effort of guests to prepare the noodles, vending machines offer a full prepared dish in about three minutes. 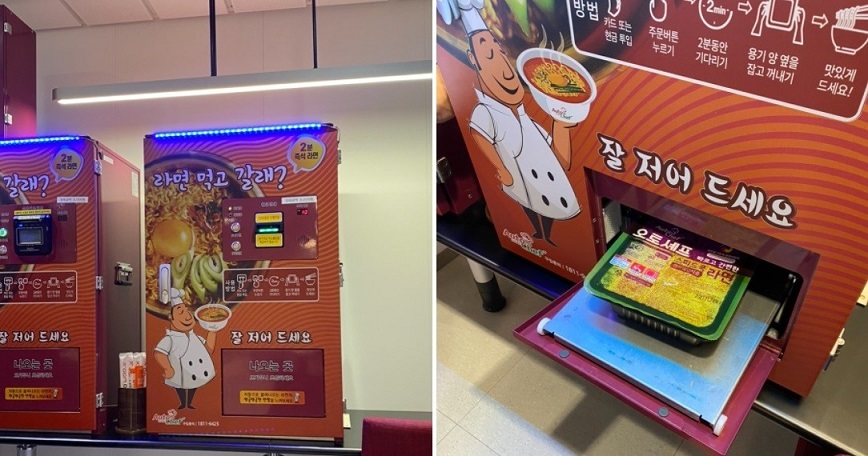 Data shows Koreans’ unwavering affection for ramen. According to data from the World Instant Noodles Association, Koreans consume an average of 80 packets of instant noodles per year, which marked the highest figure among 15 countries surveyed by the organization, including the US, Japan, China.

Meanwhile, riding on the spread of Hallyu, Korea’s own ramen has gradually expanded its global reach.

The country’s outbound shipments of instant noodles reached an all-time high of $607.9 million in the January-November period of 2021, up 10.6 percent from the same period of 2020, Korea Customs Service data showed Monday.

China was the largest overseas market for Korean ramen in the cited period, with exports posting $133.42 million. The US came next at $70.76 million, followed by Japan with $58.77 million, Taiwan with $29.18 million and the Philippines at $25.96 million.