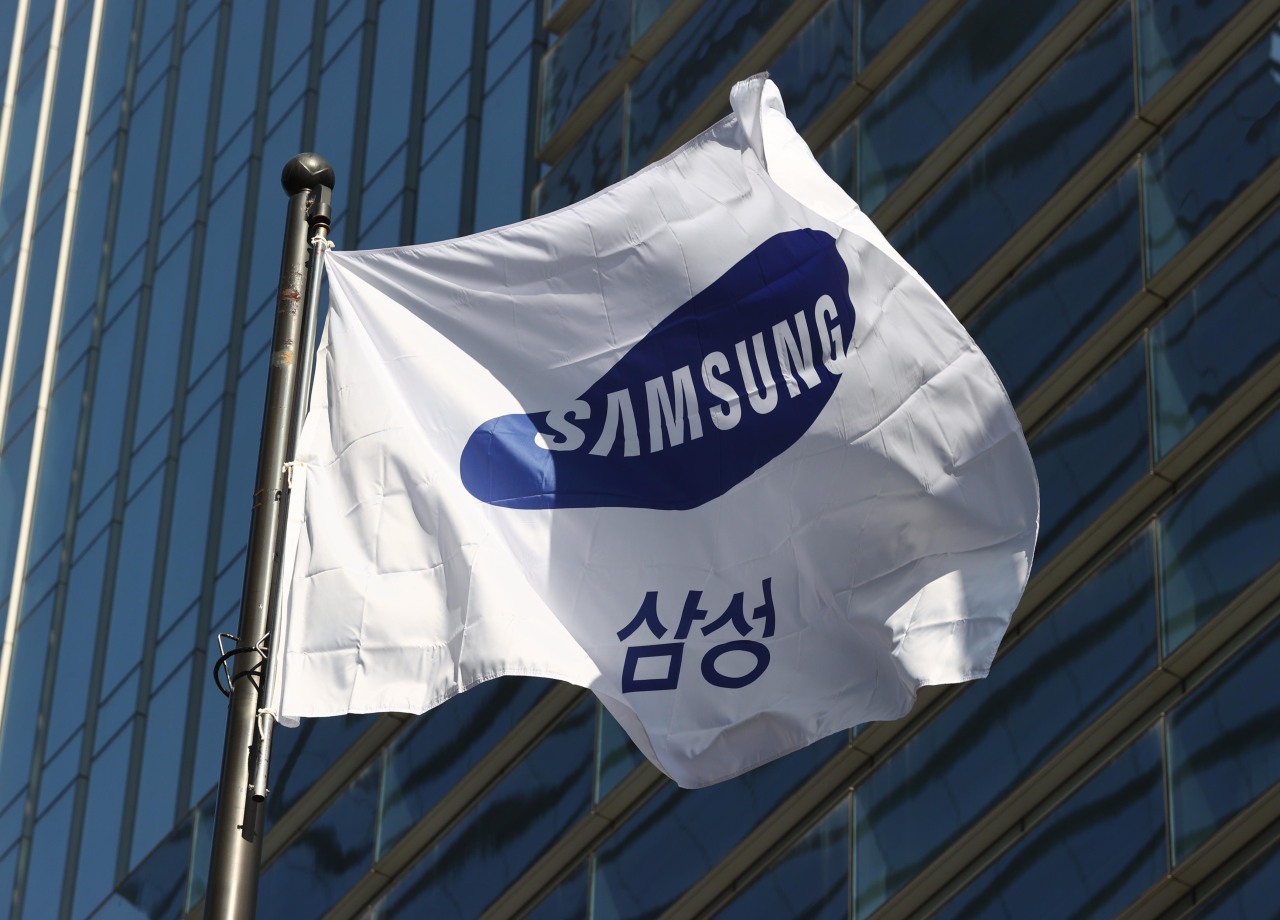 A Samsung flag flutters at its headquarters building in Seocho-gu, Seoul. (Yonhap)
Samsung Electronics saw revenue of 94.16 trillion won ($78.36 billion) in its semiconductor chip business alone for 2021, up 29 percent from the previous year, its earnings call showed Thursday, beating its US chipmaking rival Intel‘s full-year $74.7 billion in revenue, released a day prior.

It was an all-time high sales record from the chipmaking operation by the Suwon, Gyeonggi Province-based tech giant, outdoing the 86.29 trillion won it earned in 2018. Memory chips alone earned 72.6 trillion won in revenue last year.

Driving the record performance was a solid demand for memory chips, combined with an increased capacity and higher prices of contract manufacturing operations, a Samsung official said during the conference call held Thursday.

“In foundry, ... on a year on year basis, results improved due to the start of operations at the S5 fab (in Hwaseong, Gyeonggi Province) in conjunction with price adjustments.”

The operating profit of the semiconductor business rose over 55 percent to 29.2 trillion won for 2021. This indicated that nearly 60 percent of the company‘s income came from the chip business. But the figure was lower than that of 2017 and 2018 when the chip supercycle was at play.

Suh said a rising cost associated with advanced processes has affected its profitability.

This came along with Samsung‘s statement that it invested 43.6 trillion won in semiconductor-related facilities to increase its output, which took up 90 percent of the company’s total capital expenditure for 2021, in order to address the demand for advanced nodes, such as the extreme ultraviolet-based 15-nanometer process for DRAM, memory interfaces such as DDR5 and LPDDR5 and 5-nanometer EUV nodes in its foundry plant in Pyeongtaek, Gyeonggi Province.

“Investment in memory increased year-on-year as we are at the lead of an inflection point in technology,” Suh said.

The uptrend in the semiconductor business will continue for the time being, the official said, as enterprises ramp up IT investments and Samsung aims to solidify its position in its advanced technology. Moreover, its contract-based chipmaking business will introduce mass production of the first-generation Gate-All-Around process this year to woo chip clients looking for high-end technology.

Semiconductors are becoming Samsung‘s most lucrative source of income among others, ranging from mobile gadgets, TVs, display panels, and home appliances.

Buoyed by chips, Samsung announced Thursday that the company logged an all-time high yearly revenue of 279.6 trillion won, up 18 percent from the previous year. The figure was also slightly higher than that of its earnings guidance earlier in January, at 279 trillion won.

The company recorded a 51.6 trillion won operating profit, up 43.5 percent year-on-year. It was the third-highest figure in Samsung‘s history and the highest in four years. Its net profit soared 51.1 percent to 39.9 trillion won.

Samsung Electronics on Thursday also vowed to navigate uncertainties with new investments in the new realm of business and strengthen its core business.

“Challenges associated with supply chain issues and COVID-19 are likely to persist,” Suh said. “During this year we will also promote partnerships, secure technology and execute investments to gain leadership in future growth areas such as 5G, AI, cloud, IoT, and the metaverse.”

As for other businesses than chips, Samsung pinned hopes on continued demand for smartphones, wearable devices, and premium TVs amid persistent risks related to COVID-19 and other supply chain issues.

Meanwhile, Samsung announced its plan to pay out a combined 2.45 trillion won in dividend to its shareholders, or about 361 won per common share and 362 won per preferred share.

Samsung Electronics common shares fell 2.7 percent from the previous day on the Korea Exchange to be trading at 71,300 won apiece on Thursday session‘s close. This sent Samsung’s market cap to 425.65 trillion won just ahead of LG Energy Solution, which debuted Thursday. Its preferred stocks slid 1.8 percent to 65,600 won apiece.