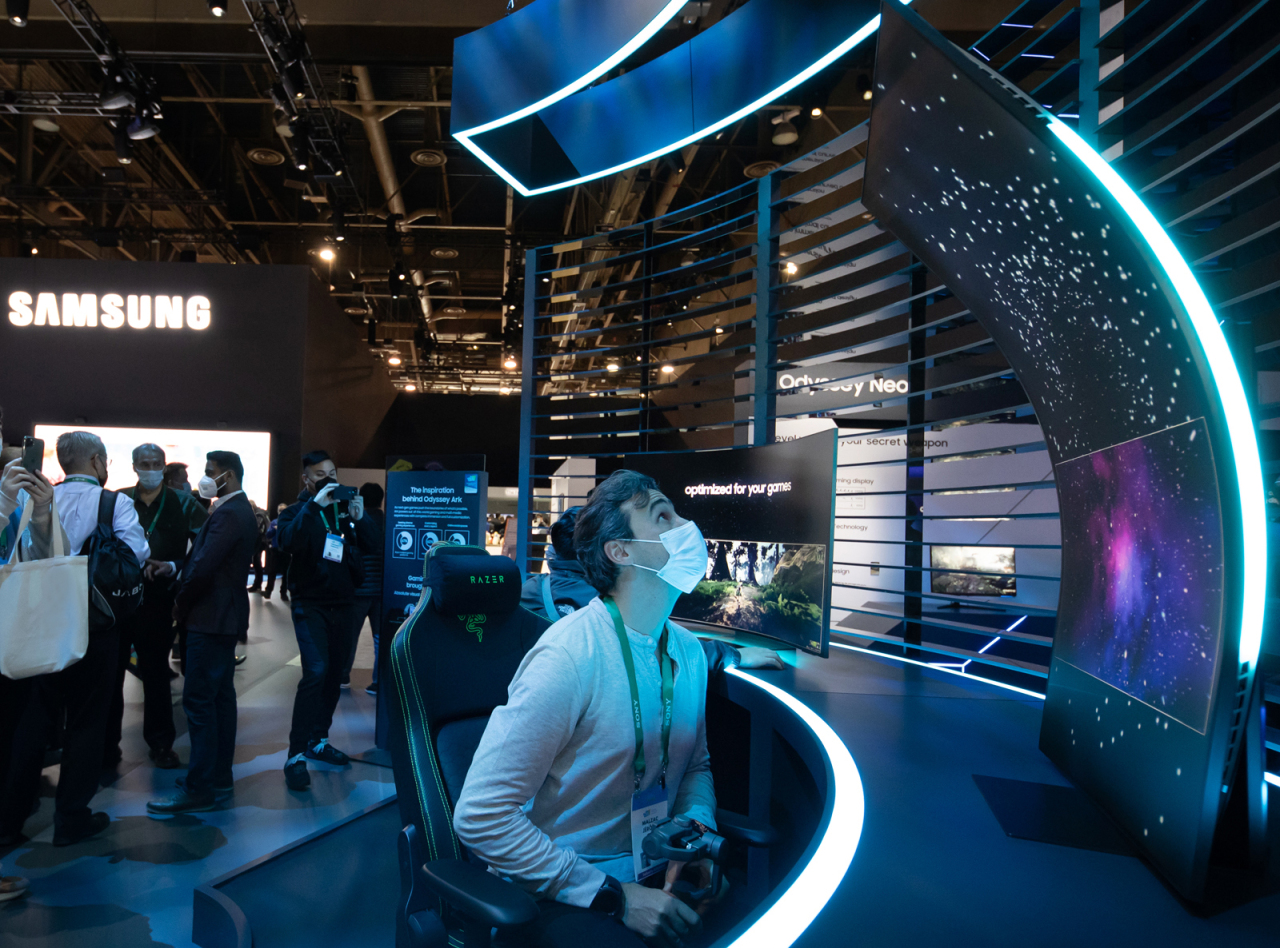 Samsung's newest 55-inch curved monitor Odyssey Ark is being presented at CES 2022 in Las Vegas. (Samsung Electronics)
Samsung Electronics logged an operating income of 51.57 trillion won ($42.89 billion) for 2021, up 43.3 percent from a year prior, as its businesses ranging from semiconductor chips to smartphones and home appliances have seen a surge in global demand, its preliminary filing showed Friday.

During the fourth quarter alone, the South Korean technology bellwether earned 13.8 trillion won, up 52.5 percent on-year, according to a consolidated earnings report.

The full-year figure, however, was slightly lower than a consensus estimate of 52.84 trillion won by analysts in South Korea, according to data compiled by market intelligence firm FnGuide. Samsung said the 2021 figure reflects spending on non-wage offerings.

The company also saw its annual revenue rise 17.8 percent to 279 trillion won, setting a new record for the full-year sales of 236 trillion won in 2020. It also beat consensus estimate of earnings at 278.1 trillion won suggested by FnGuide.

Samsung in a preliminary filing did not reveal earnings of each field of business. As of the third quarter, Samsung earned over 90 percent of its profits from semiconductors and mobile handsets from January to September 2021.

Since the second quarter of 2021, Samsung‘s Exynos processors have prompted an upshot in sales, while contract-based chip fabrication services have started to see a price increase. Its memory chip business, currently suffering a fall in prices that largely dwarfed soaring demands in servers, might see a turnaround on the bottleneck due to uncertainties including COVID-19 lockdown in parts of its supply chain, analysts said.

In the meantime, its flagship foldable phones -- including Galaxy Z Fold 3 and clamshell Z Flip 3 -- added a boost to the company’s momentum amid signs that foldables could go mainstream in premium smartphone market across the globe.

“A memory chip downcycle is expected to end earlier than expected, while (Samsung‘s) businesses ranging from semiconductor foundry and smartphone are gathering momentum,” noted Lee Soon-hak, an analyst at Hanwha Investment & Securities.

“An adjustment in the manufacturing plan at its chip factory in China’s Xi‘an will lead to a market recovery in NAND flash memory business and a price hike, while we have high anticipation for businesses regarding foundry and foldable phones.”

Samsung Electronics’ share price rose 1.3 percent to 77,900 won apiece in late morning trade at around 11:30 a.m. on the stock market, the Korea Exchange.