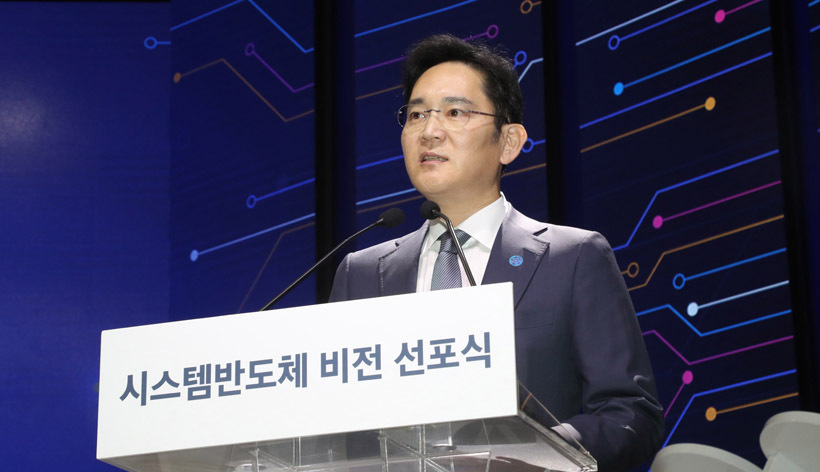 Of the total, some 180 trillion won will be spent on expanding facilities and employment here, not overseas, the company stressed. It did not unveil a breakdown of the investment plan.

The announcement came 11 days after the conglomerate’s de facto leader Lee Jae-yong was released on parole on Aug. 13 “for the sake of the Korean economy.”

Lee headed to Samsung’s headquarters in Seocho in Seoul on the day of his release and met with top executives of Samsung affiliates, including Samsung Biologics, to decide on this investment plan.

”The plan was reported to and approved by the respective board of each of the related companies,” a Samsung official told The Korea Herald.

Of the 240 trillion won, a majority of the investment is expected to go to the semiconductor business, analysts and industry observers said, as the firm pushes to further advance chip manufacturing technologies both for memory and processors.

Some of the investment will be used to develop next-generation solutions to solidify what it calls “absolute supremacy” in chip technology, especially using dynamic random access memory produced on 14-nanometer and below processes and NAND Flash with over 200 layers, the company said.

For systems-on-chip, the company highlighted the importance of the timely development of advanced processes and aggressive investments.

“The company aims to start mass production of processors using the new GAA structure technology on 3 nanometers and below,” it said.

Samsung earlier in May announced a 171 trillion-won investment package for the SoC business as part of the government-led K-semiconductor strategy plan. The 171 trillion-won plan will be executed as planned through 2030.

In the latest investment plan, Samsung has categorized its biopharmaceutical business as its second-most-important pillar of its future growth.

Samsung Biologics currently has completed and runs three CDMO plants, and is building a fourth. When the fourth plant is completed in 2023, the company would be the world’s largest CDMO, with a total capacity of 620,000 liters.

Samsung Bioepis has launched five biosimilar products in the global market, and is in the process of testing its 10th.

“Besides current biopharmaceutical products, the company will make new inroads into contract development manufacturing of new treatments including vaccines and genetic treatments,” the announcement said.

“While enhancing the domestic biopharmaceutical ecosystem through raising special workforces and localizing materials, the company will make the bio business a second semiconductor business, creating a new legend,” it said.

Samsung’s bid for the bio business is interpreted as part of Lee’s mission to boost COVID-19 vaccines.

After paroling the Samsung leader, Cheong Wa Dae released a statement saying the government expects Lee to do what he has to do on semiconductors and vaccines.

“After the COVID-19 pandemic, the biopharmaceutical industry is transforming into a national security industry beyond a high value-added knowledge industry,” a Samsung official said. “Power in bio has risen as a key national task as countries suffered from mask shortages and restrictions on vaccine exports. Samsung considers that it has become important for each country to strengthen bio facilities in their own land.”

Other than chips and bio, Samsung will also continue leading research into next-generation telecommunications, such as 6G, by investing in elevating telecom infrastructure and software.

For the next three years, Samsung will hire 40,000 new employees in the country, 10,000 more than previous recruitments, the plan noted.

The conglomerate will maintain its public recruitment system that takes place every six months to continue providing jobs for young people with the hope of helping address youth unemployment, it explained.