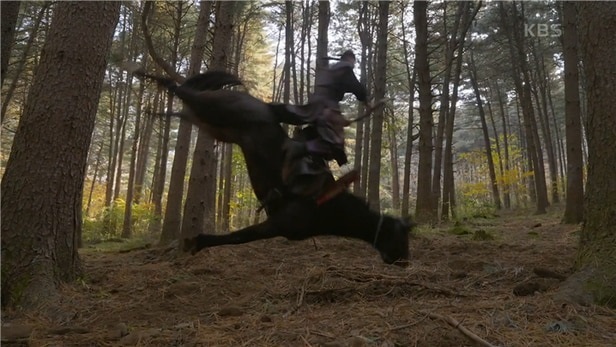 The scene, which was aired on Jan. 1, featured Yi Seong-gye, the founder of the Joseon Kingdom accidentally falling from the horse.

“We feel deeply responsible and apologize for the accident that occurred during filming,” the broadcaster said. “During filming, the actor fell far from the horse and the horse’s upper body hit the ground hard.”

The KBS production team explained that immediately after the accident, the horse got up on its own and the staff returned the horse after confirming that there were no apparent injuries.

“About a week after filming, we found out that the horse died,” the statement said.

Despite KBS’ apology statement, the criticism over the issue has yet to settle down since a behind the scenes clip released by the Korean Animal Welfare Association on Wednesday went viral.

The video clip shows the horse tied to a wire, which is used to forcefully make the animal fall to the ground. The horse in the video falls hard, while its neck is bent at an almost 90-degree angle. It also shows the horse struggling to get up afterward.

A new online petition on the Cheong Wa Dae website on Thursday demanded a halt to the production of the “The King of Tears, Lee Bang-won” and has gathered more than 39,000 petitioners as of Friday noon.

“Please halt airing a KBS drama that treats animals as props for just a one-second-long scene and punish them,” the petition read.

Concerning the petition on the Cheong Wa Dae website, a KBS spokesperson told The Korea Herald that she is not aware of it yet, as of 11:30 a.m Friday. She added that the production team is currently preparing to release another statement about the issue as the criticism continues.

“This is too much. Poor horse,” actor Ko So-young commented on her Instagram while sharing the animal abuse video released by the Korean Animal Welfare Association.

Actor Bae Da-hae shared the link to the online petition.

“I hope animal abuse disappears,” Bae said. “Please sign the petition so that the fundamental problems of animal cruelty in the media can be resolved through this incident.”

Actor Kim Hyo-jin expressed her concern about the stunt actor as well.

“This is horrible. The stunt actor was injured and the horse ended up dying,” Kim said. “I hope that the actor recovers soon. Animals on filming sets are not props, they are live animals.”